These rich, fudgy pot brownies, made with cannabutter and cacao, will give you a nice, euphoric feeling after an hour or two. Get the winning recipe in this post from Thrillist!

Unless your Grandma was more into jam bands than making jam, you’ve probably never tasted pot brownies that could even compare to her delicious, fudgy chocolate-swirl brownies. Until now. The recipe comes from Denver’s Sweet Grass Kitchen, one of Colorado’s largest distributors of cannabis-infused edibles, and winner of this year’s People’s Choice for “Best Edible Products” at the Cannabis Business Awards.

Lauren Finesilver, executive chef at Sweet Grass, tweaked her Grandmother’s recipe slightly by adding cannabutter, but the rest remains true to the original. The secret to these brownies’ rich, fudgy consistency is dark chocolate made with 60-70% cacao. “Cocoa powder doesn’t have enough chocolate flavor to balance out the cannabis,” she says. Finesilver has tried her fair share of pot-brownie recipes, including her Dad’s from the ‘70s. “His recipe included rum-soaked raisins and a ‘lid’ of pot with seeds, stems, and everything. They’re the kind of brownies that knock you out for days.”

These brownies won’t do that, but one or two servings (depending on your tolerance) will give you a nice, euphoric feeling after about an hour or two. “It’s the edible equivalent of smoking a joint,” says Finesilver. And if you do get the munchies, please, please don’t eat more brownies. Just nosh on some chimichachos, pizza rolls, or a tater tot grilled cheese instead. 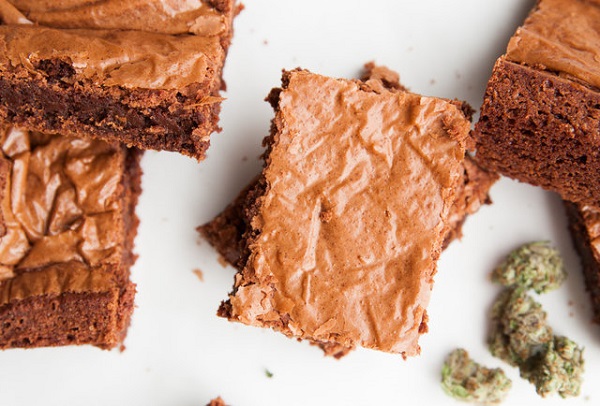