Senator Mitch McConnell introduced a new bill to remove industrial hemp from the Controlled Substances Act. Read more about the hemp legalization bill in this post from Forbes.

The most powerful Republican on Capitol Hill just filed a bill to radically change federal laws that currently make cannabis illegal for all purposes.

While new legislation introduced by Senate Majority Leader Mitch McConnell (R-KY) would not legalize marijuana for recreational or medical use, it would remove non-psychoactive cannabis varieties known as hemp from the Controlled Substances Act. 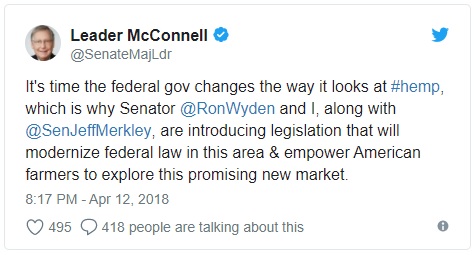 “We all are so optimistic that industrial hemp can become sometime in the future what tobacco was in Kentucky’s past,” McConnell said last month when first announcing the new bill, which he formally introduced on Thursday with a bipartisan group of cosponsors.

In addition to legalizing hemp under federal law, the Hemp Farming Act of 2018 would remove restrictions on banking access, water rights and other roadblocks that farmers and processors currently face.

The bill would also make USDA research funding available to farmers, and hemp plants would be eligible for crop insurance.

But confusion over what counts as research as well as issues related to the interstate transportation of hemp seeds has caused confusion as the Drug Enforcement Administration has in some cases sought to enforce federal laws that do not distinguish between hemp and marijuana.

While hemp products such as food, clothing and other consumer goods are legal to sell in the U.S., cultivation of the plant is banned outside of the limited exemption for state research programs, so manufacturers must in many cases import the raw materials from other countries that do no prohibit hemp farming.

“As the tobacco industry has changed, some farmers in states like Kentucky have been searching for a new crop that can support their families and grow our agricultural economy,” McConnell said in a Senate floor speech about the new bill on Thursday. “And many believe they’ve found such a product: industrial hemp. But the federal government has stood in the way. Mr. President, it’s time to change that.”

“It is really a milestone to have the majority leader of the Senate working with a bipartisan group of us to lift a restriction that is anti-farmer, certainly anti-consumer and anti-common sense,” he said. “The only thing you’re going to accomplish by smoking hemp is wasting your breath, wasting your time and wasting lighter fluid.”

Wyden also posted a series of tweets about his support for legalizing hemp.

The majority leader was an original cosponsor of a standalone industrial hemp bill during the 114th Congress, but it did not receive a hearing or a vote. Last year he signed onto a nonbinding resolution approved by the Senate in recognition of Hemp History week.

Eric Steenstra, president of Vote Hemp, said in a statement that the new bill “will finally remove the federal roadblocks holding back the industry and help to create jobs in farming and manufacturing.”

“The Hemp Farming Act of 2018 is landmark legislation that will be remembered as the key element which finally allowed the hemp industry to flourish in the U.S.,” he added.