A bipartisan group of U.S. representatives is seeking answers about why the federal government is seemingly favoring foreign marijuana suppliers while stalling the approval of additional domestic cannabis producers.

In a letter addressed to the acting administrator of the Drug Enforcement Administration (DEA) and U.S. Attorney General Jeff Sessions, 15 members of Congress, led by Reps. Matt Gaetz (R-FL) and Eric Swalwell (D-CA), expressed “deep concern” over the delay in reviewing and approving domestic cultivators of marijuana for research purposes.

Since 1968, there has been just one supplier of marijuana for research purposes in the United States—the University of Mississippi. In August 2016, the DEA announced a change in policy—”designed to foster research”—to allow more domestic entities to grow and distribute cannabis for research purposes.

Even Sessions, a longtime legalization opponent, has said that expanding the domestic supply of research marijuana would be beneficial. “I think it would be healthy to have some more competition in the supply,” the attorney general testified in a hearing last year.

But despite Sessions’s statement, some lawmakers are accusing the Department of Justice (DOJ) of stalling the review of at least 26 applications submitted to the DEA by would-be domestic marijuana suppliers. “Unfortunately, in the two years since DEA’s new policy, no additional manufacturers have been approved,” the U.S. representatives wrote in the Friday letter.

Meanwhile, on September 18, the DEA granted approval of the importation of cannabis capsules from Tilray Inc., a Canadian company, to supply research conducted by the Center for Medical Cannabis Research at the University of California San Diego.

Gaetz had previously expressed frustration in a tweet about the feds’ approval of cannabis imports while blocking expanded domestic cultivation, and last month the House Judiciary Committee approved a bill he authored that would force Sessions’s department to begin issuing new licenses.

In the new joint letter, the representatives point to the hypocrisy of Trump’s executive order to “Buy American and Hire American” while American marijuana suppliers awaiting approval continue to go ignored. 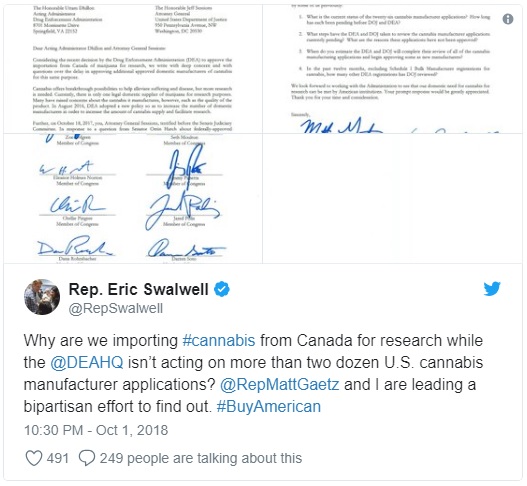 Members of Congress have pressed the DEA and the DOJ for answers since the agency began accepting cultivation license applications. They argue that limiting the domestic supply of marijuana for research purposes is detrimental to a greater understanding of marijuana’s effects on health and society.

“Research on marijuana is necessary to resolve critical questions of public health and safety, such as learning the impacts of marijuana on developing brains and formulating methods to test marijuana impairment in drivers,” Sens. Kamala Harris (D-CA) and Orrin Hatch (R-UT) wrote in a separate letter to Sessions in April. 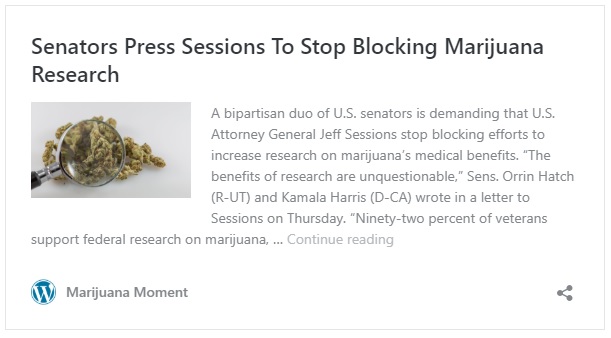 In August, Marijuana Moment reported the DEA’s move to increase the quota of cannabis that can be grown in the U.S. for research purposes in 2019—hinting at progress in the process of approving more domestic marijuana suppliers.

But while progress on licensing seems stalled, the lawmakers behind the new letter to the DEA and DOJ are confident that it’s only a matter of time before there is a more diverse selection of marijuana for research purposes in the U.S.

“There is strong and bipartisan interest in Congress in increasing the number of manufacturers in the U.S. of cannabis for research,” they wrote. “While Congress will act if the Administration does not, the Administration could make this goal a reality much more quickly if it approved some of the pending applications.”

The representatives posed a series of pointed questions to Sessions and acting DEA head Uttam Dhillon about the Trump administration’s review of pending cultivation applications and the timetable for issuing licenses.

They are requesting a “prompt response.” 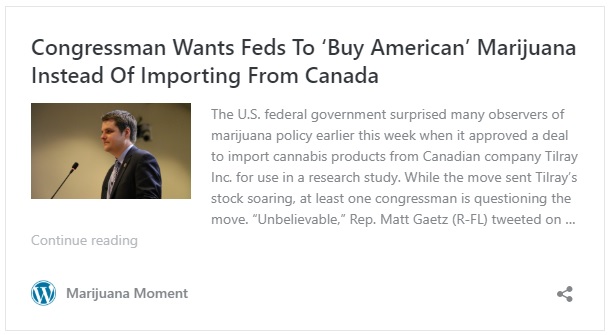