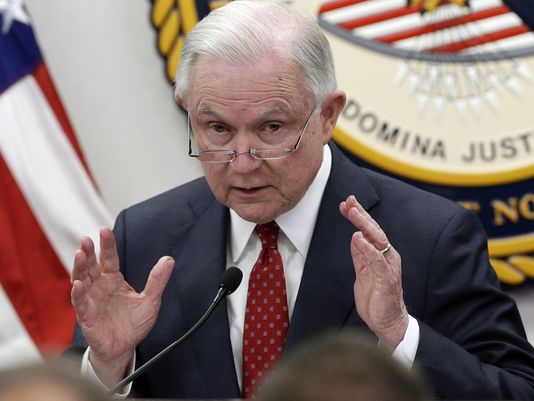 Anti-pot Jeff Sessions tried to fight marijuana legalization. Instead, he galvanized policymakers to do the opposite. I this post from USA Today read about how he unwittingly spurred the reform.

Jeff Sessions hates marijuana. He’s made that plain in multiple colorful quotes, from stating that “good people don’t smoke marijuana” to arguing that “we need grown-ups in charge in Washington to say marijuana is … in fact a very real danger.” But he may also turn out to be the best thing that’s happened to the marijuana reform movement in Washington.

For years, marijuana reform has moved at a snail’s pace in Washington. Even as more and more states — now 29 — legalized medical marijuana and increasing numbers legalized adult use of marijuana, Congress held back. Occasional efforts to remove marijuana from the schedule of controlled substances have been rejected. And advocates have had to fight every year to make sure that Congress included an amendment to its appropriations bills, to protect states that legalized medical marijuana from federal interference.

In August 2013, on the heels of the success of marijuana legalization in Washington and Colorado, reformers achieved a federal coup when Deputy Attorney General James M. Cole issued guidance to prosecutors limiting the situations in which they could enforce federal criminal laws on marijuana in states that had legalized it. That memo created space for other states to proceed with legalization, and for businesses to begin operating, with some comfort that people relying on state law would not be prosecuted under federal law so long as their activities fell outside certain federal priorities.

But in January, Sessions rescinded the Cole memo. Perhaps he thought that the decision would chill further reform or spread fear among the industry.

Instead, his move seems to have galvanized policymakers. That same month, Vermontannounced that it had legalized marijuana. Cities like Albuquerque, Savannah, Ga., and Baton Rouge are decriminalizing it. And now, we’re seeing a sea change in Washington, in both parties.

In response to Sessions’ decision, Sen. Cory Gardner, a Republican from Colorado, threatened to block all Justice Department nominees. Eventually, he said he extracted from Trump a commitment that the Justice Department would not interfere with legal marijuana in Colorado, and that Trump would support legislation to protect states that had legalized medical and adult use marijuana.

Last month, Senate Minority Leader Chuck Schumer, D-N.Y., — historically not a big proponent of rolling back criminal laws like those on marijuana — announced that he would be introducing legislation to remove marijuana from the list of controlled substances, essentially leaving it up to the states to decide how to handle it.

While this is not the same, even Sen. Mitch McConnell, R-Ky., is pushing a bill to legalize industrial hemp. His longtime colleague, former House Speaker John Boehner, recently made a high-profile entry into the medical marijuana industry.

And growing numbers of members of Congress are now sponsoring the Marijuana Justice Act, which Sen. Cory Booker, D-N.J., introduced last August. That bill, modeled after California’s Proposition 64, would not only legalize marijuana, but also begin to repair the devastation wrought by decades of marijuana prohibition, allowing those convicted of possession to clear their records, access to the marijuana market for the communities most harmed by prohibition, and reinvestment of marijuana taxes in those communities.

These provisions are particularly important in light of the ugly reality that law enforcement has disproportionately targeted black and brown people for marijuana offenses, making them much more likely to be arrested for marijuana use — and suffer all the consequences that flow from that — even though they use marijuana at the same rate as white people.

Sessions himself seems to have been forced to moderate his rhetoric. In response to questions about marijuana enforcement at a recent Senate hearing, he said that his priorities lay elsewhere, and insisted that it was up to Congress to change the laws.

Of course, Sessions or some overeager U.S. attorney may still try to go after legal marijuana. Trump may renege on his commitment to Gardner. Things may still get worse on federal marijuana policy before they get better.

But with more than 60% of the U.S. public behind reform, including majorities among young liberals and conservatives alike, there’s only so long that the federal government can continue to hold out against reform. And thanks to Sessions, change may come sooner than we thought.

Twenty-nine states and Washington D.C, have legalized the use of medical marijuana and on top of that, nine states have legalized recreational pot. But the question is, why was it illegal in the first place? Just the FAQs