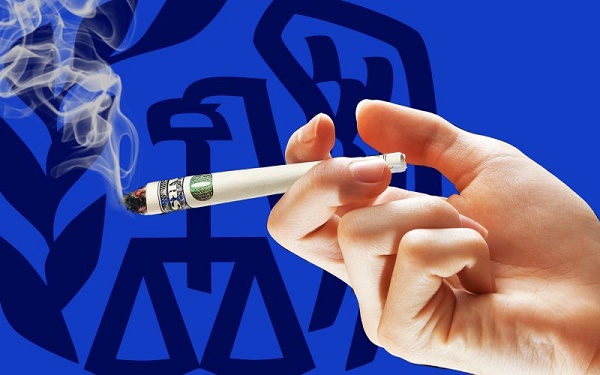 Section 280E of the tax code is making legal marijuana businesses to pay up to 70% in taxes effectively. This post from The Daily Beast highlights how the legit marijuana industry has been crippled by old tax laws.

A law passed in the ‘80s to prevent drug dealers from getting tax breaks is now taking a huge chomp out of legitimate outfits in Colorado and Washington.

Legal marijuana sales in Colorado and Washington have grossed billions, but legal dealers will see little of that thanks to a draconian federal law meant to punish street pushers.

In one of the first years of legal sales, 2015, Colorado moved nearly $1 billion worth of ganja and is estimated to take in $135 million in taxes on it. Meanwhile, Washington is expected to pull in around $1 billion in revenue from sales taxes between 2015 and 2019. Despite technically being illegal on the federal level, these businesses must file taxes to the Internal Revenue Service—and they may pay as much as 70 percent in taxes to the feds.

That’s thanks to Section 280E of the tax code. Congress passed the measure in 1982 so that businesses who are “trafficking in controlled substances” that are prohibited by federal law may not utilize many tax deductions and credits available to other businesses, like deducting rent and employees. That means a marijuana business owner can pay an effective tax rate as high as 70 percent, as opposed to the more typical 30 percent rate.

It came about when a Minneapolis drug dealer named Jeffrey Edmondson tried to arguein court that he should be allowed to write off expenses related to his business. That greedy bastard.

“280E was more a political statement than a model of tax policy,” Pat Oglesby, a North Carolina lawyer who has worked on tax policy for Congress, told The Daily Beast. He said the war on drugs was “raging” and no one bothered to question any laws that made them look tough on drugs.

“The 280E provision was so politically bulletproof that no committee bothered to even hold hearings,” Oglesby said. Drug laws were accepted as quickly as one might accept free drugs.

Despite the fact that marijuana is still a Schedule I controlled substance (illegal), the IRS doesn’t have the capacity to check if every business it deals with is legal on a federal level.

“It’s hard enough to collect taxes, much less make other determinations,” Oglesby said. He also noted that marijuana businesses would be at risk of tax evasion charges if they didn’t pay proper federal taxes.

Marijuana businesses have to register and incorporate in states and that puts them on the IRS radar. Just because the business is illegal according to federal law doesn’t mean the IRS doesn’t expect them to pay federal taxes, since the states are allowing them to operate and demanding their own cut.

Sky-high federal taxes on top of state taxes can make it almost impossible to operate a legal business.

“When I sat down to read the tax code I was not shocked that such a short paragraph could really be the cause for all the alarm,” Tim Cullen, CEO of the Denver-based marijuana grower and retailer Colorado Harvest Company, told The Daily Beast.

The effect of the tax code has been “nothing short of discrimination,” he added.

“The IRS has placed itself in a position of being both judge and jury,” Cullen said. “They have ruled on the morality of medical marijuana by applying a different set of rules to our business simply because they don’t like it.”

Ian Eisenberg, owners of the Uncle Ike’s cannabis store in Seattle, said he has seen many people getting into the marijuana industry try to create a business model that is far too expensive before realizing they have to scale down.

“Everything from how the stores laid out to merchandising to inventory management, [the tax code] dictates how the business operates,” Eisenberg said. He said he’d love to open a boutique marijuana store with a large floor space and stations for concentrate, edibles, specific growers and more, but the tax burden makes the unreasonable.

“Instead it’s more like a 7-Eleven, because it’s all about efficiency,” Eisenberg said. People dream of opening a marijuana palace and they get a marijuana warehouse.

Paul Armentano, the deputy director of the marijuana advocacy organization NORML, told The Daily Beast that national legalization or decriminalization of marijuana likely won’t happen immediately, so the tax code should at least be fixed to let businesses make deductions.

Sen. Ron Wyden, D-OR, and Sen. Rand Paul, R-KY, introduced The Small Business Tax Equity Act last year that would let marijuana businesses that are compliant with state law make standard business deductions. The bill has been stuck in committee since then though.

A representative from the IRS told The Daily Beast that 280E was introduced by Congress, so it is not a policy from the agency.

Armentano also wants to see businesses be allowed to deal with banks, since marijuana companies are being forced to deal in cash, because federally insured banks won’t open accounts with them (after all, it’s “drug money”). Legislation has also been introduced to change that.

Eisenberg said as a marijuana business owner who follows the industry closely, he’d love to see the tax code changed, but he doesn’t see it happening. You can’t blame him for not believing in the power of congressional expediency. He said he worries about legalizing marijuana federally, because then large out-of-state businesses could come in and create major competition. As the taxes and laws stand, business owners have to be quiet and take a beating.

If the government fails to cut businesses a break, legal marijuana could be sold on the black market to dodge takes—just like cigarettes bought down south and sold in high-tax New York. We’re moving toward more common sense drug regulations after the height of the war on drugs, but there is still a lot of madness left to clean up.