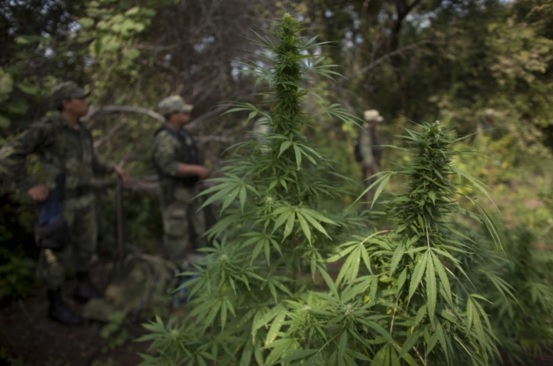 Legal marijuana in the U.S. is hurting the profits of Mexican drug cartels and marijuana growers. This article from The Washington Post highlights how legal marijuana is finally doing what the drug war couldn’t.

Legal marijuana may be doing at least one thing that a decades-long drug war couldn’t: taking a bite out of Mexican drug cartels’ profits.

The latest data from the U.S. Border Patrol shows that last year, marijuana seizures along the southwest border tumbled to their lowest level in at least a decade. Agents snagged roughly 1.5 million pounds of marijuana at the border, down from a peak of nearly 4 million pounds in 2009. 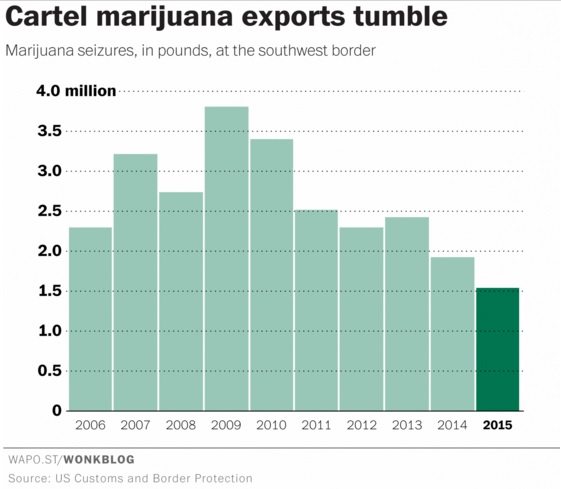 The data supports the many stories about the difficulties marijuana growers in Mexico face in light of increased competition from the north. As domestic marijuana production has ramped up in places such as California, Colorado and Washington, marijuana prices have fallen, especially at the bulk level.

And it’s not just price — Mexican growers are facing pressure on quality, too. “The quality of marijuana produced in Mexico and the Caribbean is thought to be inferior to the marijuana produced domestically in the United States or in Canada,” the DEA wrote last year in its 2015 National Drug Threat Assessment. “Law enforcement reporting indicates that Mexican cartels are attempting to produce higher-quality marijuana to keep up with U.S. demand.”

If the decline in border seizures is any indication, however, it appears that Mexican growers are having difficulty competing with domestic production. Some federal authorities are beginning to believe this is the case. Noting the decline in border seizures, Michael Botticelli, director of the Office of National Drug Control Policy, told a Senate committee last year that “given theincrease in marijuana use among the American population, this suggests that people using marijuana in the United States may be increasingly obtaining marijuana from domestic sources.”

“Those trying to understand what has happened with U.S. cannabis consumption and imports over the past decade need to pay close attention to licensed and unlicensed production in medical states, especially California,” Beau Kilmer of the RAND Corporation said in an email.

California remains the country’s leader in the illicit production of marijuana, as well as marijuana grown legally under the state’s medical marijuana regime. A good barometer of this is the DEA’s data on marijuana eradication, which indicates where law enforcement officers discover and destroy marijuana crops. In 2014, California accounted for more than 60 percent of all marijuana plants seized in the United States. Given those numbers, “it’s still too soon for production in Colorado, Washington, Oregon and Alaska to be a bigger story than California,” said Jonathan Caulkins, a Carnegie-Mellon drug policy expert, in an email.

Still, there’s no question that drug production south of the border is changing. The DEA has even found evidence that the flow of illegal marijuana is starting to reverse, with some cases of U.S. marijuana being smuggled into Mexico.

The cartels, of course, are adapting to the new reality. Seizure data appears to indicate that with marijuana profits tumbling, they’re switching over to heroin and meth.