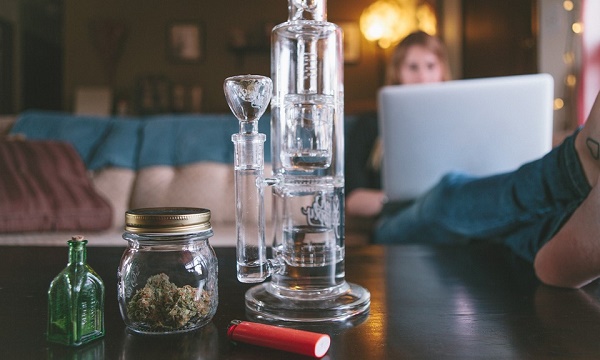 Is water pipe the solution for avoiding harmful toxins in cannabis smoke? This post from Leafly clears the air on whether the bong makes your toke any healthier.

What’s going on in that bong?

Seriously. What is the science behind the water pipe? Are those bubbles actually making your toke any healthier? It’s complicated.

A couple things are happening. Burning cannabis produces a smoke stream that contains all the things you want — activated THC, CBD, other cannabinoids and terpenes — and a lot of things you don’t, like hot smoke, tar, and fine particulate matter, a.k.a. ash. “Tar” is a catch-all term for the hundreds of nasty compounds produced by cannabis combustion. Aside from nicotine, cannabis smoke is qualitatively similar to tobacco smoke, with a lot of polycyclic aromatic hydrocarbons (PAHs) you don’t want in your lungs. There is epidemiologic evidence that tobacco smokers who use a water pipe have a much lower incidence of cancer than those who smoke cigarettes or regular pipes. So clearly there’s some good filtration going on. (Too much cannabis smoking can harm the lungs in a number of ways, but despite decades spent looking for it, researchers have never found a link between cannabis smoking and lung cancer — a story for another day.)

The bong, a.k.a. water pipe, immediately cools the smoke by passing it through water, resulting in a smoother toke. The water also filters out any ash that might otherwise blow into your mouth or airway. There’s also a certain amount of tar filtration that goes on. That’s why the water eventually turns sickly brown.

That’s about the extent of agreement, though. “There’s a great debate about whether bongs actually filter effectively,” says Kenji Hobbs, manager at Uncle Ike’s Pot Shop in Seattle. “Studies in California have shown bongs filter more water-soluble psychoactive cannabinoids than tar and polycarbons, which means the user has to smoke more weed to get an effective high, because the tar-to-cannabinoid ration is now more skewed towards tar.”

Nobody’s sure exactly how much cannabinoid filtration is going on, though. “Those who are familiar with and work in cannabis extractions know that water, as a polar solvent, doesn’t do a good job of dissolving cannabinoids, terpenes, or waxes,” says A.J. Fabrizio, director of research for Los Angeles-are medical cannabis company Terra Tech. This is why homebrew concentrate makers use non-polar solvents such as butane, not water, as a solvent. (We shouldn’t have to say this, but: Please don’t homebrew concentrates using solvents. It’s illegal and people could die. Try making rosin instead.)

“Are you losing any cannabinoids or terpenes as the gas passes through water?” says Fabrizio. “Yes, but it’s negligible. The water will preferentially filter particulate matter and potentially solvate polar molecules, over the cannabinoids and terpenes, which have virtually zero water solubility.”

It’s not a one-way exchange, though. What’s in the water can also change the nature of the smoke. “If you’ve inhaled through dirty bong water, you know what happens,” says Fabrizio. “It tastes like dirty disgusting resin.” Further, “if the water has been chlorinated, that chlorine flavor will carry through.” That’s because the gas is absorbing denatured constituents from the dirty water, such as plant-based molecules that have been fully oxidized during combustion, and that exchange comes through the bubbles. It’s a two-way interaction. “This is why people talk about cleaning your bong — and it’s also important with dabbing too. You need to make sure that chamber and that water is pretty clean if you want to ensure an unadulterated flavor”

Does it make sense to use alcohol — vodka and such — in the chamber? “Not advised, or safe,” says Fabrizio. “Huffing alcohol fumes is toxic.” In addition, cannabinoids and terpenes are more likely to dissolve in alcohol than water, so you’re essentially stripping the smoke of its more desirable compounds. It’s also a nasty inhalation experience, as our Leafly testing team recently found in The Great Bong Experiment of 2016.

Very few studies have been done on cannabis and water pipes, and those studies have turned up curious data. That “California study” Hobbs, of Uncle Ike’s, referred to was carried out in the mid-1990s by Dale Gieringer, NORML’s California state coordinator, in association with MAPS, the Multidisciplinary Association for Psychedelic Studies. They wanted to test the effectiveness of bongs, joints, and vaporizers. They found that unfiltered joints actually outperformed the bong — by quite a lot. The bong, they reported, “produced 30% more tar per cannabinoids than the unfiltered joint.” The vaporizer — at the time, one of the earliest on the market — vastly outperformed them all, delivering far more cannabinoids per unit of tar. One of the problems, Gieringer wrote back then, was that the researchers were forced to use poor-quality marijuana supplied by the National Institute on Drug Abuse, with THC levels of 2.3 percent. (Today’s legal cannabis typically ranges between 15 to 25 percent THC.) That little detail matters, because it requires consumers to burn more leaf – and inhale more unwanted byproducts – to obtain the desired level of cannabinoid intake. “We were surprised and a little disappointed at the time,” Gieringer recalled last week. “But we learned that vaporization looked good, even with what was at the time a really crude device.”

Also in the mid-1990s, University of Wisconsin pharmacologist Nicholas V. Cozzi penned aliterature review of past water pipe studies, mostly from the 1960s and 1970s. He found that the devices “can be effective in removing components from marijuana smoke that are known toxicants, while allowing the THC to pass through relatively intact.”

The conflicting results were puzzling, to say the least, and pointed out the need for further study. Unfortunately, further water pipe studies were not forthcoming. Researchers instead focused their attention on studies of vaporizers as a more healthy vehicle for cannabis dosing. In the meantime, Gieringer had a tip for those looking for a healthier form of intake: Consider more cannabinoids per unit of vegetable matter.

“The easiest way for most smokers to avoid harmful smoke toxins,” he wrote, “may be simply to smoke stronger marijuana.”

Source: Cannabis Science 101: The Complex Chemistry of the Bong – Leafly