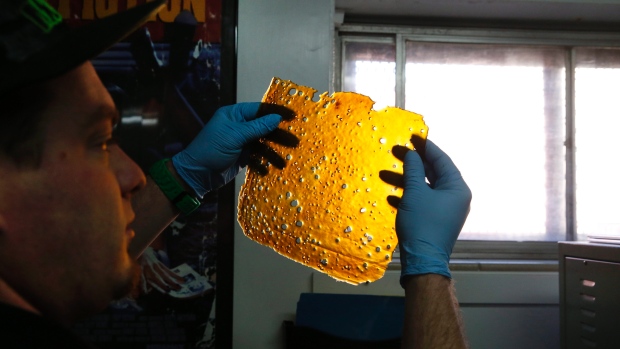 Increasing attention is being paid to Shatter, a strong marijuana derivative, that is posing new risks and new challenges for the police and policy makers. This post from CBC News Canada highlights the ripples caused by Shatter in marijuana world.

It’s been called “marijuana on steroids.”

And it comes with a THC concentration far beyond anything a run-of-the-mill joint would offer.

With that potency, along with the dangers from its production, shatter is offering police and policy makers a new set of challenges, perhaps particularly as the federal government moves toward legalizing marijuana.

“It’s the highly variable [tetrahydrocannabinol] concentration that you see where a lot of people get into dangers,” says Matthew Young, a senior research and policy analyst at the Canadian Centre on Substance Abuse.

Strong marijuana derivatives like shatter are nothing new. But shatter has been drawing more public and police attention in recent months because of the potential for explosion as it is made, using the volatile solvent butane to extract the THC from the marijuana “shake” or plant leftovers.

“The risks and the hazards related to the production of shatter are as high if not higher than a methamphetamine lab because of the amount of solvents that’s being used,” says Luc Chicoine, the RCMP’s national drug program co-ordinator.

“Those solvents go in the air. Often it’s being done in residences and in enclosed areas, and then you’re increasing the risk for explosion.”

Hard to get the numbers

Tracking shatter — which can have a consistency like hard caramel or peanut brittle — across Canada is not that easy. Police reports don’t necessarily break out shatter separately from other forms of marijuana, although news releases sometimes mention its seizure.

“Typically shatter won’t be found by itself,” says Mike Serr, deputy chief constable of the Abbotsford Police Department and chair of the drug abuse committee for the Canadian Association of Chiefs of Police.

While shatter has been turning up in police reports across the country, it has emerged in particular in B.C.

Going back to 2013, police have come across seven marijuana oil extraction labs in the Lower Mainland. Six of those discoveries were the result of an explosion, says Serr, In most cases, there was at least one person injured. In one instance, it led to a death.

Serr sees several reasons for the increasing attention being paid to shatter.

“I think the culture around marijuana is changing. People are always looking for new products, derivatives, edibles and those kinds of things,” he says, noting also a “change in the culture” because of all the talk about the possible medical uses of marijuana and legalization.

“Partly I think [it’s] just because the police like to make a big deal out of cannabis products and scare people,” he says, noting cannabis users have been making “very potent and pure” marijuana extracts for hundreds of years.

“I think it’s just a new product that’s becoming more popular, although it’s been on the market for several years now. Even shatter itself isn’t really that new, but the police and media are usually a few years behind where the cannabis culture is.”

Wherever that cannabis culture is, there are clearly those within it who are intrigued by the THC concentration of shatter, which some estimates put as high as 85 or 90 per cent.

“It’s not like the marijuana that a lot of the older people remember, which was 10 or 12 per cent,” says Serr.

“This is basically marijuana on steroids. It’s 30 to 90 per cent highly concentrated. Some users have referred to it as smoking three joints at once. The people who are looking for the next level of high are seeking out these types of product.”

These higher concentrations have raised concerns around the effects of shatter, particularly on young people.

“The first user or the second-time user that has used THC on the street, now they think that shatter is an easier way to carry it around.

“You need less so you don’t need rolling paper. You don’t need a big joint, you can just apply it to a regular cigarette or hot knife it or inhale the THC. But now you’re looking at [something] three, four, five times more potent,” says Chicoine.

“It’s not a concern with lethal overdose, but we do know there can be an overdose on cannabis in so much as you can have a very different experience from what you’re expecting that can be quite frightening and traumatic to the individual going through the experience,” says Rebecca Jesseman, a senior policy adviser at the Canadian Centre on Substance Abuse.

Not for the first-time user

If someone does consume a much greater quantity of THC than was expected, reactions could include anxiety and heart palpitations.

Larsen says that for a first-time user, “probably doing a big glob of shatter” isn’t the best way to start.

“But if you’re an experienced user and you need or prefer to have a stronger dose in a smaller amount as opposed to having to consume a lot of cannabis to get what you need, it can be quite effective.”

He also argues that marijuana products such as shatter should be available under legalization.

“If they’re not, people will continue to make them in their homes and we shouldn’t be doing that,” he says.

“They can be dangerous to make and should be done in a lab or in some kind of safe conditions and that I think is the role of the government …  to regulate the producers of these kind of products.”

Amendments this year to federal medical marijuana regulations mean derivatives can be made by someone who has a licence, says Serr. But “people could not use organic solvents such as butane” to make those derivatives.

“Even though edibles, cookies, brownies, some oils are legal, the process to make shatter is still illegal,” he says. “It’s a bit confusing right now with the multiple court cases and the multiple regulations we’re under.”

Still, as the federal government moves toward legalization, dealing with the level of concentration within marijuana products will be one issue policy makers will most likely have to consider.

In doing so, they may look to other jurisdictions for their experiences.

The Canadian Centre on Substance Abuse issued a report a few weeks ago entitled “Cannabis Regulation: Lessons Learned from Colorado and Washington State.”

“If we wanted to really take away the lessons we learned … in Colorado and Washington, it would be either prohibit or put very strict controls on these higher THC products and these different product formats until we have the research, until we know what the impacts are and really focusing on a public health approach,” says Jesseman.

“It’s really easier as we accumulate knowledge to relax restrictions as appropriate than it is to impose more severe restrictions.”