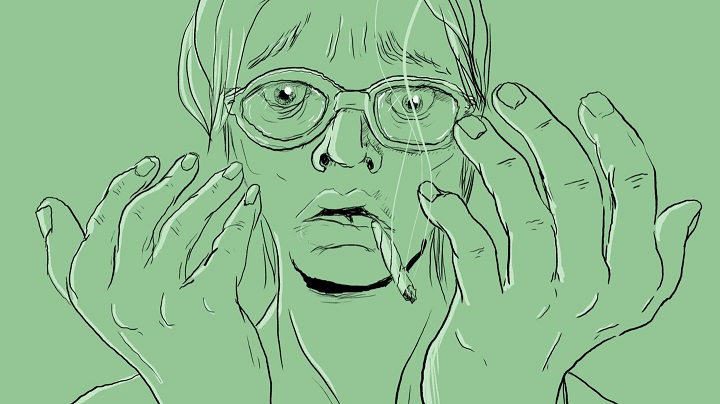 Ever feel the anxiety when you smoke up? Scientists are still trying to work out why. This post from Motherboard highlights how marijuana-induced anxiety is the weed culture’s bigfoot!

I was at a friend’s house five years ago, curled into a ball after three hits of unequivocally good weed. My brain loomed in and out of consciousness. I was scared. Every few seconds, the room would turn black. I could feel my heart about to burst, and eventually, I succumbed to a comatose-like sleep. It wasn’t like other times, and it sucked.

Marijuana-induced anxiety is weed culture’s Bigfoot—an urban legend that’s perpetuated by hearsay, rather than fact. Everyone knows someone whose friend’s cousin had a bad trip. (“But like, weed is really good for anxiety, right?”). As a result, the truth of the matter is muddled, and discussing reefer madness can actually make you feel insane.

“I puked some indeterminate number of times. Then I basically just lay down on the tile floor. Some part of me was aware, the whole time, that I was just way too high, and it would eventually pass,” one person told me about their experience. “I woke up on the bathroom floor in the morning. I felt extremely bad.”

“My boyfriend and I had tickets to a Kate Nash concert and smoked a joint before heading out,” said another. “I remember feeling kind of floaty on the cab ride over—almost like I wasn’t fully in my body…Then, during the opener, the room started to go dizzy and I suddenly couldn’t see or hear anything. The next thing I remember is waking up on the floor several minutes later, a crowd of people hovering around me, feeling like I’d died.”

“I wasn’t right for the next three days,” one person who developed a later anxiety disorder told me. “My friends still talk about this event and we laugh, but that experience fucked me up and I never smoked weed again. And never will.”

I spoke to dozens of people whose symptoms were mostly the same: anxiety, distorted vision or hearing, dizziness, and blacking out. These aren’t the nice effects of weed, mind you. And as someone with an anxiety disorder, I can tell you they feel a lot like a panic attack.

Thanks in part to stringent marijuana laws, it’s been difficult for researchers to gather data that isn’t only self-reported.

But it’s not clear whether weed jumpstarts anxiety disorders, and the association is tenuous. When existing studies on this topic were reevaluated, and other anxiety stressors were controlled for, an almost insignificant amount of people showed a link between marijuana use and anxiety development. Research based on longitudinal data from a National Epidemiologic Survey on Alcohol and Related Conditions, which included interviews with 34,653 participants, also found negligible evidence that weed can catalyze anxiety.

Still, thanks in part to stringent marijuana laws, it’s been difficult for researchers to gather data that isn’t only self-reported. Things like cannabis strain, for instance, which can determine the type of high that someone gets, are impossible to standardize in large studies.

“It’s not just whether or not a person has a genetic risk factor. It’s really looking at the expression of those genes, and that’s brought on by environmental factors that change the way genes are expressed,” April Thames, an assistant professor at the University of California, Los Angeles’ Department of Psychiatry and Biobehavioral Sciences, told me.

“It’s conceivable that the use of these substances could impact one’s trajectory to develop anxiety, but need there needs to be more research.”

For people who already have anxiety disorders, it’s a little different. Stress and anxiety are brother and sister—controlling one can help the other. A prominent theory suggests that naturally occurring cannabinoids in our brains can be produced in response to stress hormones. These molecules, in turn, may disrupt the amygdala, a region near the base of our brain that contributes to anxious feelings when overstimulated, according to a 2016 study published in the Journal of Neuroscience. It should be noted, however, that this was an animal study, which affects its ability to reliably predict these same results in humans.

Another study, published one year earlier in Neuropsychopharmacology Reviews, also linked cannabinoids, specifically anandamide (AEA) and 2-arachidonoylglycerol (2-AG), to stress responses. It stated that certain cannabinoid receptors interact with these molecules to regulate stress. Based on this research, it’s been theorized that when tetrahydrocannabinol, or THC—the psychoactive compound in weed that gets you high—binds with specific brain receptors, feelings of anxiety can either be increased or decreased. And for some people, smoking weed with higher levels of THC can induce symptoms common with anxiety.

“If someone has a history of anxiety, panic episodes, or even depression, cannabis can exacerbate those effects, according to some literature,” Thames added. “There’s some thought that cannabis has a connection [with making these receptors more sensitive], bringing on an anxiety-like state.”

Different strains of weed can also play a role. Thoughtful sellers often prescribe indica, rather than sativa, to anxiety-prone people. There are shaky genetic differences between modern Cannabis indica and Cannabis sativa, but very broadly, certain types of indica can possess higher cannabidiol (CBD) levels. CBD is a cannabinoid like THC, but is non-psychoactive, resulting in a gentler high. (As with all homeopathic medicine, your method may vary.)

If one thing’s for certain, it’s that weed is still drastically under-researched, and we won’t know if and when weed will give us a panic attack until we surpass regulatory hurdles and embrace the science. Hopefully, as marijuana laws become less draconian, psychologists will have more freedom to study its effects—positive and negative.

Until then, don’t feel down if weed makes you feel bad. Experiment with different strains, and at the end of the day, remember that it’s supposed to make you feel good.