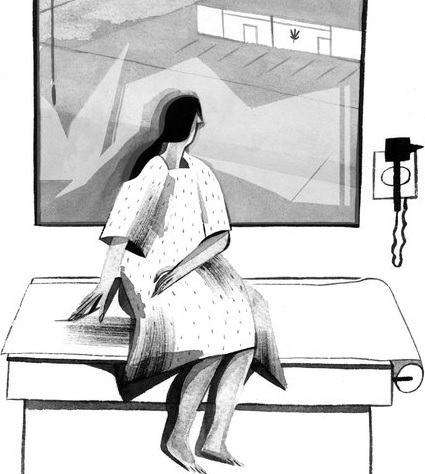 Our mainstream health care system can learn some valuable lessons from the medical marijuana dispensaries. This post from The New York Times a palliative care physician discusses the simple and inexpensive changes that any clinic could start making today.

THE first time you meet Robin, it’s easy to be misled by her fragile appearance. She’s in her 40s and painfully thin, and she grips her aluminum walker with hands that have been twisted by rheumatoid arthritis. But she’s both tough and resourceful, and she doesn’t give up easily.

I met Robin and many others like her at a California medical marijuanaclinic where I was doing research for a book. She was one of almost a dozen patients seeking recommendation letters that would let them buy marijuana at designated dispensaries.

I asked how marijuana helped her.

She said it helped her sleep, and it relieved the constant pain in her joints. But Robin was most eager to talk about how medical marijuana put her in charge. She can decide whether to use it, when to use it and how much she needs. She doesn’t have to rely on a doctor.

In the past year I’ve talked to dozens of these patients in states where medical marijuana is legal, as well as in Colorado, Washington and Oregon, which allow recreational use. Many people with serious illnesses turn to medical marijuana because they’re not getting the careful, comprehensive treatment they need for symptoms like pain or nausea or anxiety. That was certainly true for Robin, whose physicians didn’t seem to have the time or the skills to help her.

As a palliative care physician, every day I see firsthand the suffering my patients have experienced, and the lengths to which they’ve gone to manage their symptoms and control their lives. They stockpile medications in case their pain increases. And some buy illegal drugs on the street because their physicians won’t prescribe opioids. So is it any wonder that people like Robin with serious illnesses want to take matters into their own hands?

Yet it seems that many of my physician colleagues haven’t considered the possibility that patients are turning to medical marijuana because the health care system has failed them. In general, their reaction to medical marijuana has been one of detached amusement, tinged with avuncular concern. And when they recognize the challenges that patients like Robin face, they point out that they don’t have enough time in a typical 15-minute visit to deliver the kind of personalized care that Robin needed.

Fortunately, Robin’s story offers solutions. I’ve identified at least three lessons the medical marijuana industry holds for our health care system. And none of them require doctors to spend any more time with patients.

First, we should give patients a chance to learn from one another. In marijuana clinics and dispensaries, I’ve seen as much advice and support offered by patients as I have by physicians. That’s the beauty and attraction of websites like PatientsLikeMe, which has created communities of patients who support one another. Who better to offer advice about how to get your prescriptions filled on the weekends, or how to swallow those large pills, than someone who has already figured it out?

Second, if physicians can’t spend more time with patients — and, in general, they can’t — we should give patients more time with other office staff members. Robin didn’t spend any more time with a doctor in that clinic than my patients spend with me. But she spent much more time with the marijuana clinic employees, none of whom had any formal medical training. They gave detailed answers to her questions about various marijuana strains, the unpredictable absorption of cannabinoids in edibles and even how to clean and maintain her vaporizer. That advice took time, but none of it required an extra minute with a physician.

Third, we should give patients more ability to manage their treatment. What Robin wanted was a chance to treat her symptoms in her own way, using strategies that worked for her. She wanted to try, and maybe fail, and try again. She wanted to be in charge.

Giving patients more control doesn’t mean handing over a blank prescription pad. Patients can gain more control — safely — if they understand a drug’s effects and duration, and if they have some leeway in when and how to use it. For instance, when I prescribe as-needed pain medication, I’ll give my patients permission to figure out for themselves how much to take and when.

These suggestions aren’t difficult, or expensive. Nor are they only for patients like Robin, or for physicians like me who care for seriously ill patients near the end of life. They’re changes that any clinic could start making today. The medical marijuana industry has learned these lessons well, and our more mainstream health care system needs to catch up.

Source: What I Learned at the Weed Dispensary – The New York Times