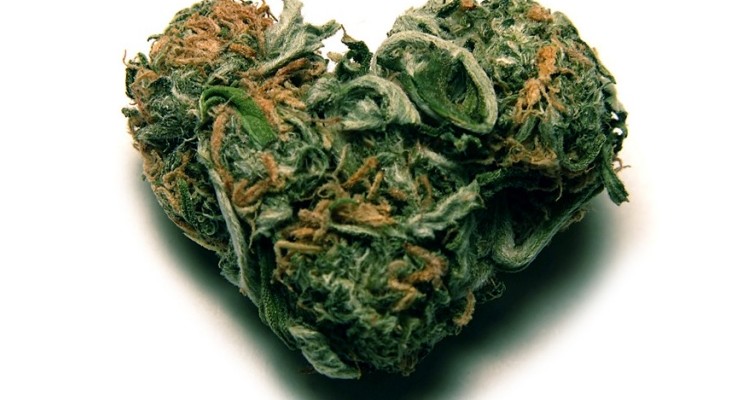 Cannabis lovers have their reasons for romancing the weed. This post from The 420 Times highlights top five reasons why I love weed.

I know that some folks might think it’s a bit odd for someone to claim they have a romance with weed, but I’m just being honest.

No, I’m not in a serious relationship with a giant sack of bud, however, I have maintained a long-lasting interconnection with cannabis and all things associated therein. And that association has truly flowered into what I would consider to be quite an enjoyable love affair.

Let’s face it, there isn’t much not to love about the cannabis plant, especially with all that’s going right these days for weed and its community of unwavered consumers in terms of law reform.

But if one were to make a list of the pros and cons in respect to cannabis and its uses, the list of cons would be about as long as my attention span would be for carving my own pan flute out of recycled bamboo. Needless to say the pros of pot will always top the list, largely due to its plethora of medicinal benefits, but also because peop’s like to puff the sticky stuff for a variety of positive justifications.

Why I Love Weed:

1- It makes me happy

I know that’s what a lot of folks say but they say it for a damn good reason; because it does. We can thank the fact that we possess an endocannabinoid system (ECS) for the scientific reasoning behind why smoking cannabis makes people contented. And as most of us that are in the know are already fully aware of, there is a long history of folks consuming cannabis for recreational purposes.

In fact, archeologists have unearthed secret stashes of maryjane from over 2,700 years ago (talk about your musty closet bud), which proves people have had courtships with cannabis for eons, and will most likely continue to do so.

Whether or not consuming cannabis enhances sexual experiences seems to be somewhat debateable. Especially since solid scientific data proving it to be effective at magnifying sexual pleasure, or diminishing for that matter, isn’t attainable at this time. And the reason we lack data of this type is mainly due to the fact that attempting to determine that conclusion most likely is not of high priority in the scientific community. And we can only imagine that sexual pleasure will probably remain low on their list of priorities until they fry the bigger fish, such as cancer, and a host of other debilitating ailments. So the easiest way to ascertain if consuming the sticky stuff helps boost sexual gratification is through personal analysis. ‘Hey, babe (he/she/they). You wanna smoke some stuff and get in the buff?’

3- It broadens my thought process (aka It expands my mind)

I know, you can probably hear sitar music playing in the background while reading that, but it’s true. For me at least. I find that taking a few puffs before making decisions about important stuff always seems to lead to a broader sense of perception, which is basically becoming more aware. And of course, this is another situation where we come up short in respect to finding data that supports the scientific reasoning as to why that may be verifiable. But seeing as how the endocannabinoid system plays such an important role in understanding how consuming cannabis affects us from a scientific standpoint, further exploring how it functions could quite plausibly produce the numerous answers we seek. Just think how much we would know if our corrupt government chose logic over greed when enacting their outmoded drug policy. Take a few tokes and contemplate that very thought. It baffles the mind. ‘So, like… (puff, puff, pass), this Harry Anslinger dude was a total money-grubbing douche, okay….’

4- When I spark it up, it sparks up my creativity in return

Although it may not be true for everyone that consumes cannabis, I find that partaking in a couple puffs (or several) produces innovativeness and creative vision. And I’m sure I could find a few intelligent tokers that would be willing to concur with that sentiment. One factor that may need to be considered when trying to decide as to whether or not consuming weed generates creative thinking is the strain in which you ingest. My personal preference in regards to types of cannabis is Indica or Indica-dominant, so the whole ‘Sativa is the variety that triggers creativity’ is null and void. In my case anyway. I’ve found that Sativa and Sativa-dominant strains actually send my mind racing to the point where I can’t focus, which is exactly the opposite effect that I desire when blazing on some fine bud. I think this is another situation where self-experimentation is in order, don’t you? ‘Let’s see here (puff, puff, no one to pass to, so keep puffing it yourself), the Sativa made me want to clean house and run around the neighborhood, but the Indica helped me relax and focus on my video game skills. Hmm?’

5- It helps me sleep, and enhances my dreams

Are you one of those folks that can recall their dreams in great detail? Yeah, me too. I know people that claim they don’t dream at all. Which seems like it would make the act of sleeping quite boring, right? But as a person that does dream on a nightly basis, I can avow that going to bed medicated does indeed intensify my dreams. In fact, it magnifies my dreams to the point that they seem somewhat realistic in essence, which can turn out to be good or bad, all depending what you had to eat before you hit the hay.

And when it comes to using cannabis as a sleep aid, I’ve yet to find a better alternative, manmade or otherwise. You could set a clock by my sleeping habits. All thanks to weed, that is. Something tells me that would be an entirely different story if I favored Sativas over Indicas, but I won’t be conducting any personal appraisals on that subject anytime soon, so again, you’ll need to conduct your own single-subject research. ‘Hmm? The Sativas had me staring at the clock all night and thinking about my taxes, but the Indicas made me sleep like a hollowed out log and allowed me to wake up feeling rested.’

There are a superabundance of rationales as to why I possess deep affection for dank bud. So abundant, in fact, that my list of grounds for loving maryjane could easily fill this entire website.

So what are some of the reasons that you love weed to the extreme that you do?

I’d be willing to bet my list is longer than yours.

Source: My Cannabis Romance: Why I Love Weed |