Cannabis market may be far bigger than anticipated earlier. This post from CNBC reveals what the top analyst thinks of this nascent industry poised for high growth.

With Canada about to legalize recreational use of marijuana, the industry’s rapid evolution and new strategic partnerships with mainstream brands reveal a far larger possible market for pot than investors and analysts first anticipated, according to Cowen.

“With cannabis, you’re talking about this massive step change in terms of the addressable market,” Vivien Azer said on CNBC’s “Squawk Box ” on Wednesday. “You’re bringing a $7 billion illicit market into the legal market and so it does require a different valuation framework.”

Azer, the only pot analyst from a major Wall Street research house, nearly tripled her 12-month price forecast on Canadian marijuana producer Tilraythis week to $172 from $62. The new target for the stock, which trades in the U.S. on the Nasdaq, implies more than 30 percent upside from current levels. She also upped her forecast on Canadian pot company Canopy Growth.

Just how big the market will get is tough to put a number on right now, but Azer cites a cannabis executive who estimated the market could be one day worth $500 billion.

“Our broader, big picture view of cannabis goes beyond the adult use launch in Canada,” she wrote in a report this week. “Rather, we believe this is the first step toward the establishment of cannabis as a key functional ingredient touching multiple consumer categories with four key verticals: adult use, beauty and nutraceuticals, OTC pain and sleep, and pharmaceuticals.”

Recreational use of cannabis in Canada becomes legal Oct. 17, though each of the country’s 10 provinces will be able to regulate the market within their jurisdiction independent of Ottawa. 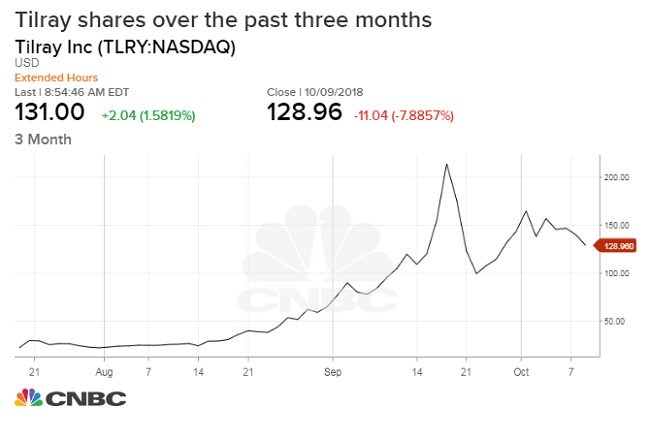 While it’s still early days for the marijuana business, the first signs of its broader applications are easily recognized.

Tilray shares, which are up more than 650 percent since their July IPO, posted one of their best days ever mid-September after the company announced approval from the Drug Enforcement Administration to import weed to the U.S. for medical research.

In a move likely foreshadowing broader pharmaceutical application, the company will work with the University of California San Diego Center for Medicinal Cannabis Research to study the safety, tolerability and efficacy of marijuana for a neurological disorder.

“If this study can identify cannabinoids as a potential treatment for patients suffering from essential tremor, we can conduct further research and potentially provide alternative effective methods of relief for the high numbers of patients with Essential Tremor,” said Catherine Jacobson, director of clinical research at Tilray.

The globe’s major alcohol companies have also wasted no time exploring joint ventures with a handful of lucky cannabis producers.

Alcohol vs. Cannabis use in the U.S. 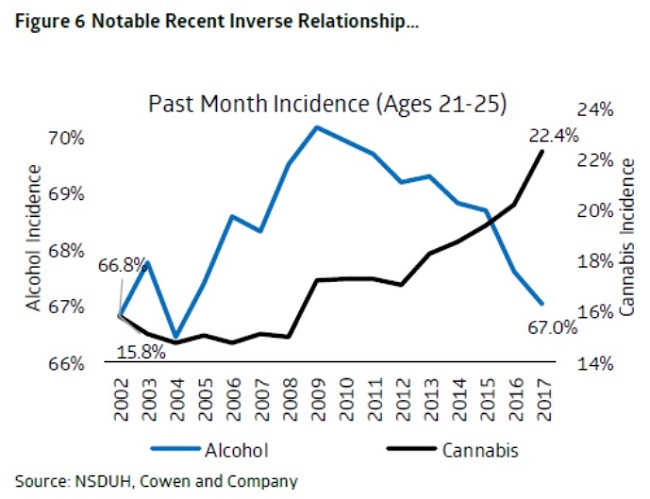 Constellation Brands recently increased its investment in Canopy Growth with a 9.9 percent stake in the company, granting the Corona beer brewer a foothold in an industry it expects to soon be legal in the United States.

“We think that we’re by far the best company in the world — or in the best position in the world of any company — to capitalize on what is absolutely without a doubt going to be a huge market over the next 10 years, hundreds of billions of dollars,” Constellation CEO Robert Sands said in the company’s earnings call Thursday.

“We expect to reap the benefits of our cannabis investment, which we see as being incremental to our core beer, wine and spirits portfolio,” he added.

And while the upside for Constellation appears obvious, the benefit is two-fold. A check from one of the world’s largest brewers is a welcome influx of capital for a handful of companies whose success will likely be defined by their ability to raise capital and scale production.

“Given the nascent stage of global cannabis, we believe that revenue growth should serve as the primary valuation methodology,” Cowen’s Azer said in her note. Specifically, Azer said her primary measurement when drawing price estimates is enterprise value divided by sales, divided by revenue growth, akin to a traditional price/earnings growth ratio.

Some Wall Street firms cover the pot stocks, but none the size of Cowen. It’s still an emerging industry.

To be sure, the spike in certain pot stocks — combined with a limited count of floating shares for some companies — has left stocks like Tilray and Canopy with lofty valuations and rampant volatility.

Tilray has about 93 million shares outstanding, but the float — those shares actually available for trading — is just 21 million, according to FactSet.

Tilray’s 2020 P/E ratio, meanwhile, is currently 300; Canopy’s is 125. Tilray’s stock price has posted no less than 12 days of double-digit moves on percentage basis in the last month.

“There have been no shortage of recent catalysts to spur market and investor interest,” Azer said. “As such, volatility should be seen as a natural occurrence in the cannabis market, and not dissimilar to other nascent industries.”