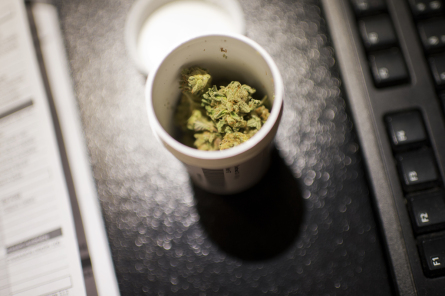 A bill that would reschedule marijuana and let states set medical marijuana policy has two Republican co-sponsors. Getting a third has been difficult. This post from Roll Call reports how the medical marijuana bill is stuck in Senate.

Even though Senate support for a medical marijuana bill is building, it’s not getting the backing it needs to advance.

In the final sprint to the August recess, any consideration in the Senate Judiciary Committee would be deferred until at least September. But when pressed on whether the bill was a priority, Chairman Charles E. Grassley, R-Iowa, said, “I’m going to wait until I talk to other Republican members.”

The bill has two Republican co-sponsors, Sens. Rand Paul of Kentucky, an original co-sponsor, and Dean Heller of Nevada. Getting a third has been difficult.

“It’s a slow process and we’re trying,” Paul told CQ Roll Call last week, adding there are “several” other Republicans they’re talking to, but none are officially on board yet.

The bill is supported by 16 senators, including Sen. Cory Booker, D-N.J., the original sponsor, and Kirsten Gillibrand, D-N.Y., an original co-sponsor. Booker referred questions about Republican outreach to his office, which did not respond to requests for comment.

The slow growth of support does not reflect national trends. A majority of states (plus the District of Columbia and Guam) allow medical marijuana or its derivatives, while a few have approved recreational use. And national polling shows overwhelming support for medical marijuana.

Some senators have applauded recent decisions by the Obama administration to slightly deregulate medical marijuana research, with calls for more research. But even some of the applauders have not signed on as co-sponsors, including Sens. Patrick J. Toomey, R-Pa., andElizabeth Warren, D-Mass.

Warren is a co-sponsor of another bill, sponsored by Merkley, that would allow legitimate marijuana businesses to use banks. But just like the medical marijuana bill, the banking bill is stuck in committee. Banking, Housing and Urban Affairs Committee Chairman Richard C. Shelby, R-Ala., told CQ Roll Call last week he did not expect that bill to be a post-recess priority for the committee.

However, a version of the bill did advance as a rider to an appropriations bill last month, much to Merkley’s delight.

“We had a 16-14 vote in appropriations in favor of blocking any federal funds being used to enforce the federal rules, thereby giving banks the ability to provide checking accounts and services to marijuana businesses that are legal under their own state laws,” Merkley said. Shelby, also an appropriator, was one of the 14 “no” votes.

Republican Sen. Cory Gardner, whose state of Colorado is one of the few to allow recreational marijuana use, noted there was still more work to be done, as appropriations bills are supposed to pass every year.

“An appropriations bill can’t create the long-term solution that we need,” said Gardner, who is a co-sponsor, along with Paul, Bennet, Wyden and Sen. Patty Murray, D-Wash.

The other problem with an appropriations rider is that all appropriations bills are caught in a partisan fight in the Senate over federal spending levels and won’t move until there is at least a broader spending agreement.

The Appropriations Committee is proving to be the most progressive on the issue, approving in the Military Construction-Veterans Affairs funding bill an amendment allowing access to medical marijuana for veterans — although the same amendment died on the House floor.

One of Congress’ biggest supporters of the marijuana movement, Rep. Earl Blumenauer, D-Ore., who introduced a bill to legalize and tax recreational marijuana at the federal level, said the banking issue is one many legislators weren’t aware of and thought it could be fixed with relative ease.

“I think there’s a wider appreciation that this is goofy,” Blumenauer said. “A lot of people didn’t know … and when they think about the implications of forcing thousands of legal business to operate on a cash-only basis, they’re concerned.”

“I anticipate that this is an area that Congress could well act with relatively minimum controversy,” Blumenauer added. “And it’s even possible that it could happen this year.”

Of the few Republican co-sponsors in the House, none are the two gatekeepers: Judiciary Chairman Robert W. Goodlatte of Virginia or Crime, Terrorism, Homeland Security and Investigations Subcommittee Chairman Jim Sensenbrenner of Wisconsin. According to a House Judiciary Committee aide, the committee does not have plans at this time to bring up those bills.

Until there’s more Republican support in both chambers, these bills are likely stuck in the hopper.