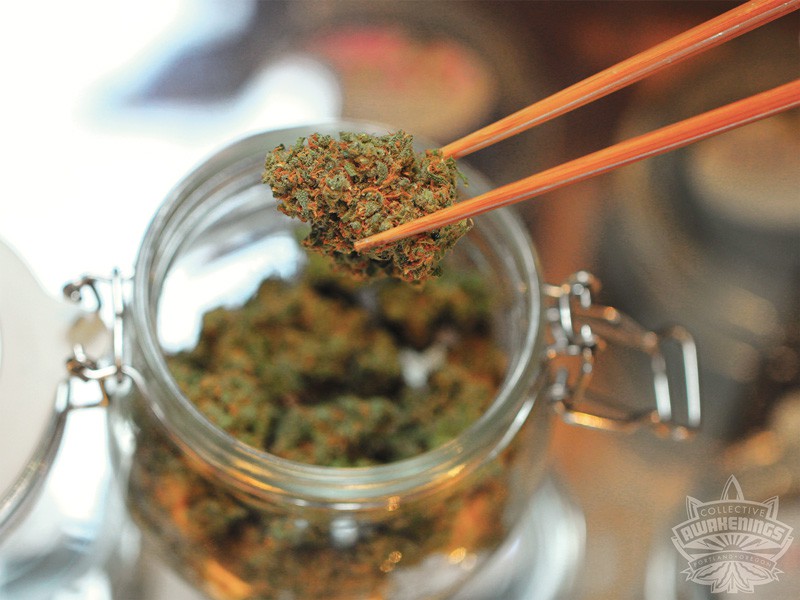 A lot has happened since Oregon’s sanctions for recreational pot use fell away three months ago—an event marked by overjoyed mass pot consumption on the Burnside Bridge.

Portland gardens have sprouted small, legal cannabis crops. Ground-breaking events allowed attendees to toke up among likeminded users without fear of a ticket. Some people got the idea to open a pot cart in St. Johns, and were promptly robbed for their trouble.

For all that, though, pot hasn’t felt truly legal in Oregon. Not yet.

That will change Thursday, October 1, the day anyone 21 and over can actually purchase a legal bag of recreational pot in Oregon. Sure, you’ll be restricted to buying a quarter ounce of flower (or baby plants or seeds). But for the first time, recreational users will have a weed store in their neighborhood, next to the grocery store or the dentist’s office.

History, people! Here are a few things you should know.

See a medical dispensary? Odds are it’ll sell you pot.

Oregon doesn’t have formal recreational shops yet, but the legislature gave the green light this year for the state’s rapidly proliferating medical marijuana dispensaries to sell weed through the end of 2016. It appears the vast majority of them are going to.

According to the Oregon Health Authority (OHA), which regulates medical pot, 98 Portland dispensaries reported they’d sell recreational weed on October 1. That’s about 80 percent of the city’s dispensaries, and it’s probably only a starting point. Since dispensaries have to give five days’ notice before selling to non-patients, it’s exceedingly possible some didn’t give enough notice to begin sales on October 1.

Geographically, you can find pot in almost any neighborhood, but the Eastside is pot heaven, with more than 80 percent of recreational sellers clustered. As of Tuesday morning, more than a quarter of participating dispensaries were located east of 82nd.

Want to be sure you’re headed to the right place? Check the OHA’s directory yourself, at oregon.gov/oha/mmj/Pages/directory.aspx.

These are medical dispensaries, after all. Their owners aren’t interested in giving loyal patients the shaft, just because you’re waving cash around (by the way: bring cash).

This treatment comes in many forms. Several dispensaries the Mercuryspoke with said they’d increase prices for recreational buyers, but keep them the same for patients.

“We will be marking things up to market value,” said Don Morse, owner of the Human Collective on SW Barbur. “We’ve always kept our prices low for patients.” He says that will equate to $10 to $12 a gram for recreational customers.

Other dispensaries say they’re not planning markups, but will give Oregon Medical Marijuana Program cardholders preference in line. Collective Awakenings on NE Sandy is installing two registers that will accommodate patients only.

And, of course, those patients will have access to a cornucopia of pot-tinged products you won’t be able to buy in Oregon for about a year—when the Oregon Liquor Control Commission at last gets recreational dispensaries up and running. No edibles or concentrates for you!

No one’s quite sure when they can actually start selling you pot.

Right now, dispensaries are on a relatively long leash. That’s about to change.

In a last-minute vote scheduled for Wednesday, September 30, Portland City Council appears ready to enact a new license program for pot businesses [“Portland’s Pot Regulations Might Freeze Out New Businesses,” News, Sept 23]. With that program come rules that dispensaries can only be open from 7 am to 9 pm.

But while that new regulation at first appears to crush the hopes of dispensaries that planned to open their doors at 12:01 am on October 1, it actually carries no power just yet. That’s because the law only applies to businesses that carry a City of Portland license, and those licenses won’t even be available until December.

Even the city’s been confused about this. Victor Salinas, a marijuana program specialist with the Portland Office of Neighborhood Involvement, told the Mercury on Monday, September 28, that businesses could face fines for opening before 7 am on October 1. Pressed on the language, though, Salinas’ boss, Theresa Marchetti, acknowledged the rules can’t be enforced just yet. All the city can do is issue veiled threats.

“I would caution the industry against engaging in any kind of behavior that could be viewed by the community as out of spirit with this process,” Marchetti says.

The last-minute nature of the city’s pot regulations had dispensaries confused just two days before recreational sales were supposed to begin. Morse, director of the Oregon Cannabis Business Council, said owners he spoke with had killed plans to open at midnight because of uncertainty over how the city might react.

Some were pressing forward though. Brad Zusman, owner of Canna-Daddy’s, told the Mercury he’d been advertising a midnight event for weeks, and planned to go through with it.

“There’s not much the city’s going to be able to do to enforce the curfew the first day,” Zusman said.

Then again, he planned to talk to city commissioners at Wednesday’s city council hearing, just to be sure. “We may still pull [the plans],” he said. “We’ll see what happens.”