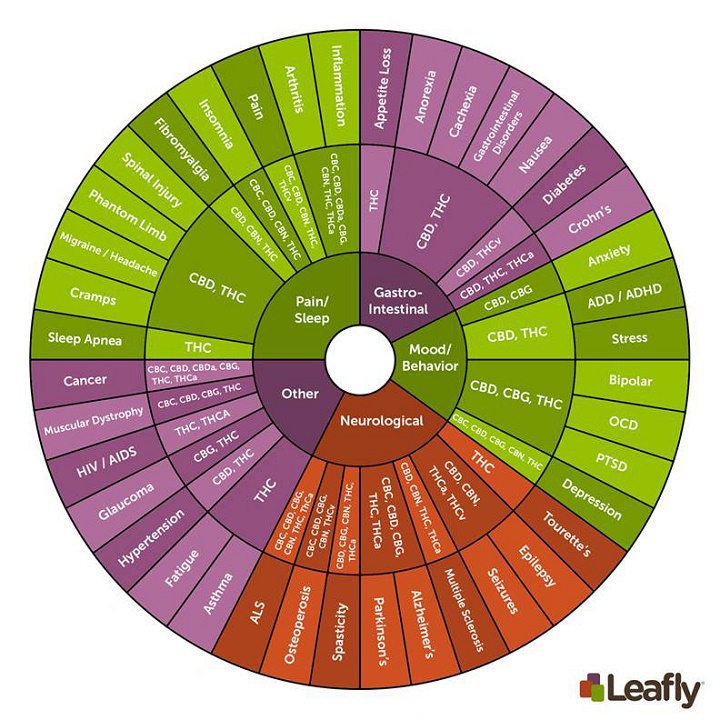 A medical marijuana 101 with special emphasis on four major cannabinoids that are supported by a solid body of research. This post from Yerba Buena gives the low down on the medical applications of major cannabinoids.

Cannabinoids are complex chemical compounds that are secreted by the cannabis plant through its flowers that mimic naturally occurring compounds produced by our bodies, called endocannabinoids. When cannabis is consumed, the cannabinoids bind to receptor sites throughout our brain and body (CB-1 and CB-2 respectively), with a wide variety of effects possible depending on the cannabinoid profile present in a given strain.

The “simplest” description of the effects of marijuana in humans is that it modulates the regulation of homeostasis. Homeostasis is keeping the various systems in the body in relative balance. The balance between inhibition and excitation, bone formation and resorption, inflammatory/anti-inflammatory signaling, fat storage and release, blood sugar, blood pressure, hormone levels; all these systems are held in balance by the endocannabinoid system. This system, though involved in maintaining nearly every biological process in all humans, wasn’t discovered until the 1980’s. Research revealed that the human body contains not only receptors for cannabinoids, but an entire endocannabinoid system that processes cannabinoids. This system allows the body to benefit from the cannabinoids found in cannabis, some of which aren’t found anywhere else in nature. The endocannabinoid system regulates many of the functions of the human body: appetite, food intake, motor behavior, reproduction, and much more. That’s why the plant has such a wide therapeutic potential, and every day more are discovered.

At least 85 different cannabinoids have been isolated from the cannabis plant. For years THC has been described as the primary compound in cannabis due to it’s famous psychoactive effects, but recent research has identified many other important cannabinoids, each linked with specific medicinal effects. During prohibition (the last 80 years), cannabis has been primarily bred to increase THC content to increase the altering effect of the plant, as demanded by the black market. Now that things are changing, other cannabinoids are reaching the medical spotlight and strains are being bred to increase their presence.

Common testing methods provide profiling for the three most prevalent cannabinoids – THC, CBD and CBN, but there are many others to be aware of, including the acid forms of each cannabinoid. There is still much to be studied about this plant and its many components, but with restrictions on scientific research of cannabis slowly relaxing, more information continues to come to light.

Here is an overview of the four major cannabinoids that are supported by a solid body of research at this time:

Effects: Responsible for the ‘’high’’effect (psychotropic), it amplifies all sensory functions such as sight, hearing, color sensitivity, and promotes a greater sense of well-being. THC produces strong feelings of euphoria. It sharpens the mind (cerebral) and promotes creativity. THC displays a wide range of properties, which can be expressed differently when accompanied by various other cannabinoids and terpenes.
Side effects vary from one person to another and include: dry mouth, dry eyes, disorientation, short-term memory malfunctions, increased heart-rate, anxiety, and paranoia. Most of these are a result of over-medication and are avoidable with low doses.

Effects: CBD has medical effects but does not make people feel “stoned” and actually counters some of the effects of THC. After decades in which only high-THC Cannabis was available, CBD-rich strains are now being grown by and for medical users. The reduced psychoactivity of CBD-rich Cannabis may make it an appealing treatment option for patients seeking anti-inflammatory, anti-pain, anti-anxiety and/or anti-spasm effects without euphoria or lethargy.

Effects: Mildly psychoactive, sedative, analgesic. CBN is, just like aspirin, a non-narcotic type analgesic, but 3 times as strong. CBN is a breakdown product of THC. During storage (aging) CBN will slowly increase as THC deteriorates. CBN is effective at relieving tension headaches.

Cannabigerol (CBG) is the “stem cell” for many chemicals in marijuana, including THC and CBD. Scientists first discovered cannabigerol, or CBG, in 1964 as a constituent of hashish. In 1975, researchers found out that CBGA (the acid form of CBG) is the first cannabinoid formed in the plant, essentially the first expression of cannabis’ unique class of constituents. From there, CBGA gets transformed into THCA, CBDA or CBCA by the action of enzymes. CBGA is the precursor for all the cannabinoids we know and love.

CBG also has a number of medicinal properties of its own. Cannabigerol (CBG) is non-psychoactive but still affects the overall effects of Cannabis. Many users find that strains with high CBG have less negative side effects of THC. CBG has been shown to promote apoptosis in cancer cells and inhibit tumor growth in mice.

The Endocannabindoid System—This ancient system found in all vertebrate maintains homeostasis within and across the organizational scales of all animals, including humans, and includes the Cb1 and Cb2 receptors. Within a cell, cannabinoids control basic metabolic processes such as glucose metabolism. Cannabinoids regulate intercellular communication, especially in the immune and nervous systems. In general, cannabinoids modulate and coordinate tissues, organ and body systems (including the cardiovascular, digestive, endocrine, excretory, immune, musculo- skeletal, nervous, reproductive, and respiratory systems). The effects of cannabinoids on consciousness are not well understood, but are well known. These effects also have therapeutic possibilities.

Endocannabinoids—Cannabinoids produced by the body.

Phytocannabinoids—Cannabinoids produced by the plant.

CB1 Receptor—Primarily found in the brain.

AEA (Anandamide)—An endogenous cannabinoid neurotransmitter found in organs (human and most animals), with an abundant amount located in the brain. (While delta-9-tetrahydrocannabinol (THC) was first synthesized by Mechoulam in 1967 [13], it was not until 1990 that the cannabinoid receptor was localized in the brain [14] and cloned [15]. Since then, discoveries in the field have have proceeded at an ever-increasing pace.)

The Endocannabinoid system is involved in most physiological systems.

Source: What are Cannabinoids? | Yerba Buena