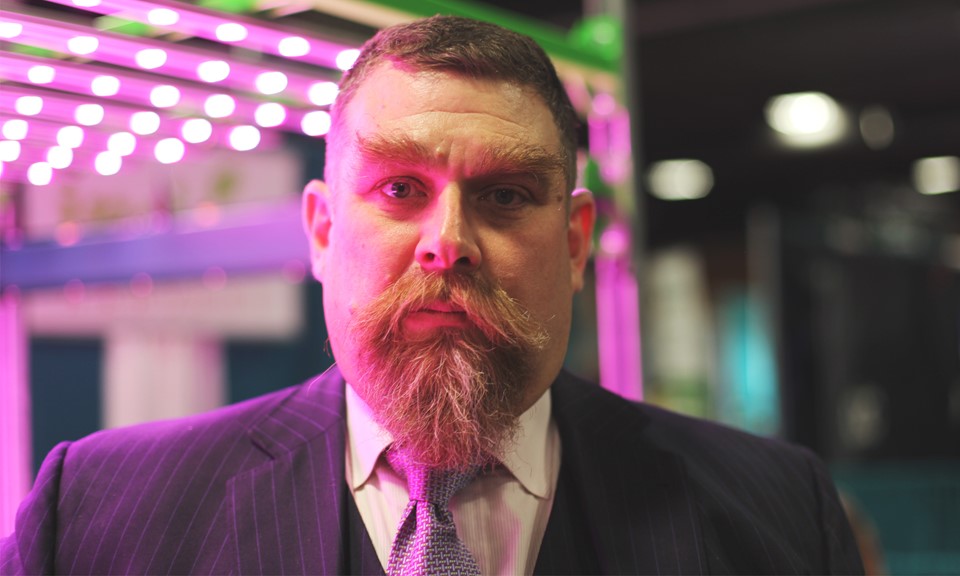 Bocskor cut his teeth as an investment banker during the 1990s dot-com boom. He’s lived through investment mania, bubbles, and bursts. He’s been called the Warren Buffett of cannabis, but he’s more like Warren Buffett gone Burning Man. (Bocskor was, in fact, a regional coordinator for the festival in its early days.) In 2014, Cannabis Business Executive ranked him 58th on their list of The 100 Most Influential People in the industry. Last year theArcView Investment Network named him its most valuable member.

I first met Bocskor three years ago at an ArcView meeting in Seattle. Cannabis investment conferences now draw thousands, but back then you could stuff all the willing financiers into aTuff Shed. There were about 20 investors in attendance that day, and the only two who weren’t already running dispensaries or baking edibles were Bocskor and a retired pilot from Yakima. I don’t recall the pilot’s name. But Bocskor was memorable because— well, look at the guy. He’s not exactly trying to blend in. He never has.

During a swing through Las Vegas last week, I sat down with Bocskor in Electrum’s offices in downtown Las Vegas, about four miles north of The Strip. I wanted to know how he decided where to invest his money, and how the cannabis investment world had changed over the past three years. And, frankly, it’s just fun to hear him talk.

Leafly: What do you look for in a potential investment?

Leslie Bocskor: We look at the team. I’d rather bet on an A team with a B project than a B team with an A project.

This is what I want to know: Have they gotten to previous exits before? Have they had successes? Are they working in a space in the cannabis industry that is based upon experience, best practices, knowledge, and relationships they’ve had before?

Example: Tom Quigley of The Gluu.

Tom is building a web-based platform for the distribution of products in the legal cannabis industry that don’t touch the plant. Think Cisco Foods for the cannabis industry. Think smoke shops, convenience stores, and, eventually, dispensaries, cultivation centers and processing centers. They all have certain needs that are specific to this industry. They also have needs that are not specific to the industry: toilet paper, copier toner, things like that. The way Cisco provides everything to a restaurant, Tom can provide everything to these shops.

He’s done it before. He built Krush Communications, got it to $25 million in revenue selling prepaid phone cards to smoke shops. So this is just rinse and repeat for him. I love finding a guy who’s had a team, a person who’s had success like that in a specific area, who is now migrating into this industry.

Here’s another example. If somebody has run a nursery and now they’re going to be running, let’s say they’re going to be creating the cannabis plants in their veg stage and then ship them to a grower who’s got a flowering limit, or has a canopy limit. One of the efficiencies people have been exploring is this: Maybe one licensee produces only veg plants, and then other licensees raise only flowering plants. So that way you take advantage of your canopy, you can be most effective, you don’t have to try to do two things. If somebody has experience running a nursery, and then they’re going to move into that space, I’m going to favor that company. Because of their previous experience, they’re going to know things that somebody who’s coming into it new won’t.

Second, I look at the value proposition.

I’m looking for the people who have the big vision. I’m looking for people who are going to be able to scale up a very large size. So someone who is looking to, like Tom Quigley, put together something that can achieve that size. Or another company I like, GrowBlox Sciences, they have ideas about creating cultivation technologies that will be usable not only in cannabis — which is going to be gigantic — not only in hemp, which is going to be gigantic, but in other industries and agricultural verticals as well. This is a business that could rapidly grow from something that is small, to hundreds of millions in revenue in a few years, because of all of the energy that the cannabis industry brings in.

Third, I look for people who have a very good understanding of the market. I want to speak to people who are walking, thinking, speaking rocks. They have it down. They know what the market that they’re entering looks like. They know what the nuances are. They’re aware of the agility needed to deal with the rapidly changing regulatory environment and the business issues that come from that. They have their due diligence solid and all referenced. I’m not looking for people who have assumptions and gut instincts. I’m looking for people who can reference why their gut instincts and their assumptions have meat on the bone.

I want someone who’s thinking about the exit strategy. I don’t want people who are only in it to win it quickly. But I want them to understand that there’s got to be a terminus that you’re thinking about from the beginning. Am I building this company to sell it? Am I building it to be profitable and create dividends for shareholders? Am I creating this to look into the public markets? I want to know how they’ve looked at all of those questions.

Those are my criteria.

How is the cannabis investment market different than it was two or three years ago?

There was a RAND report I read, a ten-year study from 2001 through 2010, that did a look back, and when it was published in 2011, they stated that the size of the illegal recreational market was $50 billion a year. For scale, I think when you look at the NFL, NHL, MLB, and NBA together they bring in around $35 billion in revenue a year. That gives you an idea of scale.

Why does this reference back to agility? When you’re migrating a deregulated market to a regulated market, you’re dealing with the patchwork issues of the different regulatory frameworks in each jurisdiction, both domestic and international, and the fact that these markets are just evolving.

Look at Nevada. Nevada passed a medical marijuana law in 2001. It allowed for cultivation and consumption, but no market. You couldn’t buy or sell. There was no way to create any type of economy. As such, it wasn’t fair to the patients. Because if somebody gets diagnosed with a disease, they don’t want to have to become a botanist to treat themselves.

Then in 2013 Nevada passed another set of legislation that created what is the best regulatory framework for cannabis in the entire world. That was an evolution. You have to have the agility to anticipate those shifts, to be able to deal with those shifts, understand the business issues that those shifts represent, and make sure you’re going to adapt.

Federal illegality is making it so that each state is creating its own “ringed fence” market. Interstate commerce does not apply with regard to anything that touches the plant. You have to have the agility, the nimbleness, to work in many different states. If you’re really looking for the long play, the big win, you have to be able to play in Nevada, Oregon, Washington, Colorado, California, as each state evolves.

You mentioned Nevada as the best framework for cannabis in the world. What about Nevada leads you to say that? Is it the entire package? Are there specific parts of it that are done particularly well?

There are a couple parts that are done well. First of all, Nevada has more experience in developing regulatory frameworks for things that are illegal or quasi-legal in other jurisdictions than any other jurisdiction in the world. We invented regulated gaming here in this state. We’ve spent years figuring out how to do it right.

I like to give this example: When was the last time you heard a story about a casino cheating a patron? It doesn’t happen. Not because the press doesn’t publish it. They’d love to publish it if they could find it. But Nevada is so diligent in making sure its operators color within the lines, you don’t hear about it. Because there’s no reason to do it. You’re going to win as long as you play by the rules — so why play outside the rules? That’s why there’s a saying here: It’s easier to become a Secret Service agent covering the President of the United States than it is to get an unlimited gaming license in the state of Nevada.

So what differentiates Nevada? We’re the only jurisdiction in the world that has medical marijuana reciprocity. That’s a game changer.

If you have a recommendation from anywhere in the world, you can come to the great state of Nevada and go to one of our dispensaries and become a customer. Nowhere else has anyone used that common sense — not even Hawaii. You would expect that Hawaii, a state where tourism means so much to their economy, would have done that. Yet they will not include reciprocity until 2018.

New York, which has 55 million tourists a year, is essentially telling people who are medical marijuana patients: “If you’re going to come to New York, we do recognize medical marijuana and have a program, but you’re either going to have to break the law and fly with it or travel with it across state lines or go to the black market when you get here, because we won’t let you go to our dispensaries even if you have a recommendation from another jurisdiction.” To me, that’s just patently absurd.

The growth over the past three years in the number of investors interested in cannabis has been phenomenal. Are you seeing smart money come in, or are these conferences filling with a lot of people who are, maybe, not doing such intelligent things with their money?

The level of due diligence, the level of decision-making, has been amplified dramatically. I’m now speaking to people who are talking about commodities and commodity pricing. I’m speaking to people who come out of the finance world. Traders. Fund managers. They’re not bringing their funds in. They’re bringing their personal money in. These are smart people who for years have been studying investing, and now they’re coming to this industry to invest, individually.

I was in New York recently. I held a little dinner with ten guests. One of the guests was an attorney who’s a partner in a firm that represents over 1,000 funds. And there were three family offices represented at that dinner. These are extremely sophisticated investors.

Now, are there still people who are just throwing money around? Maybe a little bit. But I’m finding that investors are making smarter decisions in this industry than they did in investing in the internet back in the mid to late nineties when I was working in that area.

Why? Is the fact that it’s cannabis making them more cautious?

Yes. Because of federal illegality versus state legality, the complex regulatory issues, the consideration of the risks, the stigmas attached to it, the political risk, the social risk, the business risk that’s attached to being involved in it. All these considerations are forcing people to spend more time on their research and their due diligence.

Source: How a Top Cannabis Investor Looks at Your Company – Leafly