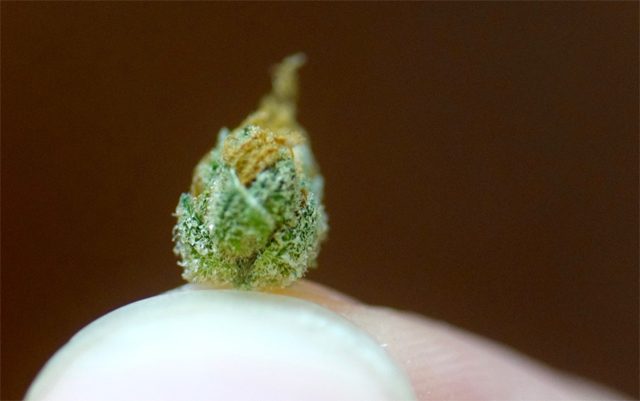 Ever tried reducing the amount of marijuana you consume by half to see if it made a difference? This post from The Marijuana Times gives the low-down on cannabis microdosing!

Cannabis differs from other “drugs” — like alcohol, sleeping tablets or painkillers — in that you do not need to perpetually increase the dosage to get the same effect. From personal experience, I’ve found that it actually seems to be the inverse. Over the years, I am consuming less in order to get as high as I need. The result is my cannabis supply lasts a very long time.

Maybe it has to do with the way that I’m smoking nowadays. When I started to consume cannabis, it was very much a social activity. As students back in the 90s, my friends and I would save up our pennies and buy our cannabis (which was usually hashish in UK’s North East). We would then go about consuming as much as we could in as short amount a time as possible. Little did we know that we were actually wasting the majority of the product we were consuming.

Once I started to consume again for predominantly medicinal use, the way I consumed cannabis changed. My life circumstances had changed. I was living in another country, was working and had kids. Buying my weed was not as convenient as before and I had also become a more choosy consumer. Purchasing now became a six hour round trip to Amsterdam to stock up on the various strains I wanted. This is not the most convenient shopping experience and the resulting bounty was something that I wanted to ensure lasted as long as possible.

You can only get so high

The more I researched cannabis, I discovered that you can only get so high. Compare that to alcohol or sleeping tablets — where the more you consume, the stronger the effect and too much will result in death. We all know this is not possible with cannabis.

The active components of cannabis are called cannabinoids, the most well-known of which are THC and CBD.

Your body produces its own cannabinoids which are called endocannabinoids. Endo comes from the Greek word that means “within”. These are vital for long-term memory processing, regulating appetite, helping to control pain, suppressing anxiety, aiding sleep and probably a whole host of things that are yet to be discovered. Incidentally, your body also produces it’s own endogenous morphine, more commonly known as endorphins. We all contain our very own little drug labs.

Now, our body only has so many key holes (receptors), so once they are full there is no place for any additional keys to fit into. This means that when your body is flooded with cannabinoids — whether they were produced internally or from an external source (a bong, for example) — they can have no effect.

Therefore, one can conclude that there is a point at which you cannot get any higher. Albeit, you will feel very high, but consuming any more cannabis at this point will only have the end result of wasting your medicine and, if you are smoking, increasing your exposure to carcinogens within the burnt plant material.

Gooey Rabinski, writing for Green Flower Media, offers more information supporting this approach. He argues that THC, once inhaled, only passes into your bloodstream through the small air sacs in your lungs called alveoli. None is taken from the smoke in your mouth or throat.

You only have so many alveoli, so flooding your lungs with more than it has the capacity to process is purely a waste of good bud. What’s more, the time it takes for the THC to pass into your bloodstream is milliseconds; so it’s safe to exhale as soon as you are able. If you take a huge drag you will be blowing out a heck of alot of THC and other useful cannabinoids into the atmosphere.

Once I discovered this, I experimented with reducing the size of the herb that I burn in my pipe. I smoke from a glass spoon pipe. I know that a vaporizer is probably a healthier way to go, but I seem to have an inertia to switching from a tried and tested method. Everyone finds what’s right for them.

I discovered that breaking off a tiny piece of a bud and burning it in my pipe allowed me to get slightly high. I was high enough to feel the benefits; pain control, sleep aid or mood enhancing. But I was not incapacitated on the sofa. I played around with the dosage in this manner until I found a chunk the size of about a third of my pinky fingernail to be a good dosage. It does depend on the strain and the result I’m seeking. Sometimes being incapacitated on the sofa is just what the doctor ordered.

This was a revelation. I no longer needed to ram a chunk the size of my thumbnail into my pipe and create billowing clouds of smoke — no matter how satisfying such a technique may be. I could get similar results with a fraction of the amount of marijuana. I was microdosing before I even knew that it was a thing.

My pot lasts seemingly forever. Gone are the days that I have to go on field trips to Amsterdam, now that I grow my own over the summer. Microdosing this way means that I have more marijuana to share with friends in need and I usually have enough to last until the next harvest. Whatever is left, I process into cannabis-infused olive oil which I store in the fridge and use as a topical to relieve aches and pains.

Now I find myself in the position of going on cannabis field trips again. People are surprised and sometimes comment on how little I put in my pipe. I’m no longer self-conscious about matters such as this and explain to them the reasoning behind my approach. On top of this, my field trips are now “work” and I should be in a state to a) maintain conversation, and b) document that conversation and events at a later date.

Try reducing the amount of marijuana you consume by half and see if it makes a difference.

I’m confident that you will not notice a reduction in your high and you’ll make your stash last twice as long. You have a lot to win and nothing to lose. Microdosing could even allow you to reduce further; I think it’s fair to say I’m consuming less than quarter of what I used to and am only a microdose away from topping up in case I feel I need the boost.