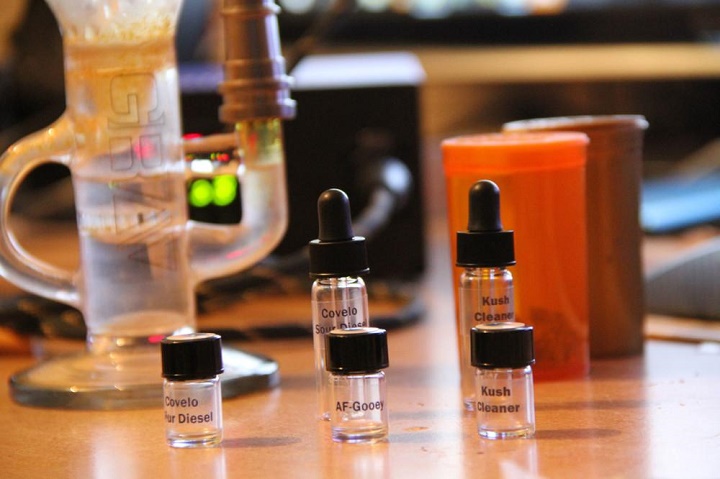 A California company is selling terpenes that supposedly enhance your highs and make your weed taste better. This post from VICE turns the spotlight on these aromatherapy oils that make your dank nugs even danker!

A cannabis producing and processing company based in California has been selling and shipping a range of its products to UK customers. It also ships to other countries where the import and export of the cannabis flower is illegal, such as Brazil, Spain, and Germany. This is the first time a cannabis-derived product has been shipped on an international scale, and the products have been reaching UK customers with no problem—but before you start to fret, everything is completely legal.

The products that Blue River Extracts sell are cannabis-derived extracts of terpenes. This means they contain no THC, CBD, or other independently psychoactive chemicals that are specifically targeted by legislation in the UK. Terpenes are essentially the molecules that produce the unique flavor and smell of any given strain of cannabis, and don’t have any significant effects when consumed alone. But when combined with cannabis or hash, they supposedly produce a superior flavor and an increased or enhanced “high.”

I called Tony Verzua, owner of Blue River Extracts and umbrella company United Cannabis, to find out more about terpenes, and what his motives were for setting it all up.

“Terpenes are found in nature—they are found everywhere in all kinds of plants and herbs,” he explained over the phone. “They make up all the flavors and aromas that come through our senses, noses and mouths.”

So when we smell a particular type of orange, for example, we are smelling the terpene profile of that orange. But what makes cannabis terpenes so special?

“Cannabis is a unique plant,” said Verzua. “It is one of the oldest surviving plants on Earth. They have found at least one hundred forty different types of terpene available in the plant at any one time. Whereas, you take most other plants or herbs—something like lavender or eucalyptus—they produce a high abundance of a single type of terpene, as opposed to the one hundred forty or so [of cannabis].”

This is why, when you walk past someone smoking a spliff in the park, or pick up the scent outside somebody’s open window, the smell is immediately recognizable. But what use do these terpenes provide beyond the nice smells and flavors?

“We call it modulation,” says Verzua, referring to how terpenes can enhance the effect of cannabinoids. “What we have found is that particular terpenes that are found in cannabis turn on a part of our endocannabinoid system called CB2 receptors. THC and CBD don’t really work without terpenes. If cannabinoids were the guitar, terpenes would be the guitar player.”

Verzua stressed that what he sells are essentially aromatherapy oils. Even though cannabis strains have a relatively unique and complex terpene profile, these are the same molecules that are present all over nature—therefore, they’re an entirely legal molecule, and one that would be virtually impossible to make illegal.

The idea and product is pretty revolutionary. “This is my way of being an activist,” said Verzua. “This is a business way of saying: ‘You know what? I’m testing the waters, pushing it.’ How do you lock someone up and tell them what you’re doing is illegal? How do you prove the molecules are actually from cannabis?”

Verzua’s passion for cannabis is not a recreational one, but stems from his medical needs as a patient. “I have used cannabis as a patient since 1996,” he said. “All the medical products I sell are ones I have invented for my own consumption over the years. Prohibition has dominated a big part of my life. It’s the right time to do this; ten to twenty years ago I’d be in jail.”

Considering his extraction work is carried out in states where recreational and/or medical cannabis is legal, Verzua is not breaking the law at any point along the chain. He told me that one of his biggest inspirations for his latest venture is the UK’s GW Pharmaceuticals, which produces a cannabinoid medicine named Sativex, and has also been studying the interactions between terpenes and cannabinoids.

“What I find extremely fascinating,” said Verzua, “is that a company like GW Pharmaceuticals exists and manufactures its cannabis in an illegal country like the UK and ships all around the world. It goes into the United States and can somehow import its drugs through Kansas, and then get them into the FDA, through a state that doesn’t have legal cannabis at all. And yet people from our own country can’t do that.”

Of course, Verzua is not a multi-national corporation with global political leverage, and so has faced barriers in his business ventures. He’s had his website taken down multiple times, his money taken, and his packages seized by FedEx—all with no real evidence or any cases brought against him.

Regardless, Verzua has big plans for his product. He hopes to expand beyond the cannabis market into areas such as food, drink, and aromatherapy. He sees cannabis terpenes as something that go way beyond the traditional cannabis market and industry. He already has a selection of products that are in research and development, such as candles, beard oils, and bath bombs—as well as other products he couldn’t talk about freely due to being under contract. He told me he was being regularly approached by people interested in using the terpenes for new products.

I contacted a few people using the product via Instagram and found that the reasons for use differed; while some simply used it to improve the flavor of their hash and oils, others were experimenting, dropping terpenes into stuff like champagne and juice. The general impression was that they were a unique experience worth trying, and—if you had the money—experimenting with.

I decided the only way to get a real flavor for the “terps” was to buy some myself. So my friend and I did just that, buying one and two 0.25ml vials respectively, giving us a nice selection to test. I ordered the Sour Diesel for myself, as it’s a strain with a smell I can identify, and therefore one I assumed I’d be able to assess better.

After receiving my parcel, I opened it up and unscrewed the lid. The power of it was pretty overwhelming, like the smell of a few ounces of weed concentrated into this tiny little vial.

The next day I met up with my friend who has the whole professional setup: a dabbing rig, an e-nail, and some cannabis concentrates. We followed guidance through various user-generated Instagram and YouTube videos, dipping small dabs of hash into the terpenes and then hitting them. The result was a mouth-watering flavor of smooth smoke—a hit of an orangey diesel taste.

The taste lingered in my mouth and nose, and in the air, for at least five minutes. I could certainly see this being on par with something like wine tasting—at least for people who really enjoy their weed. Thing is, there’s no doubt this is a luxury item; the price tag on the 0.25ml I got was about $90. Verzua explained that cannabis plants have 1 to 3 percent terpenes, and this, coupled with cost of cannabis, dictates the final price tag.

Whether or not the raw terpene product will ever take off into the mainstream is uncertain, and maybe improbable. However, once a range of products are developed using the terpenes, there is potential for accessing an entirely new market, beyond the committed cannabis community. Because, really, who wouldn’t want an OG Kush orange juice or a Super Silver Haze bath bomb?