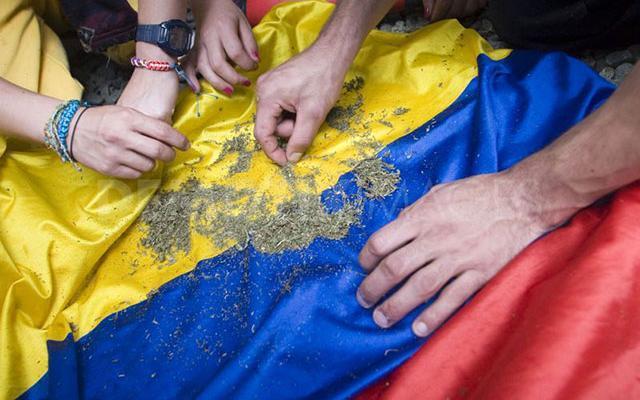 Cannabis is starting to replace coca leaves in Colombia’s cultivation zones, giving rise to a new cannabis economy. This post from High Times reports the transition in Colombia’s countryside.

On Colombia’s eastern plains, the Llanos Orientes, campesinos are starting to abandon cultivation of coca leaf for cannabis, military commanders in the region say. “”In this zone, marijuana has been replacing coca because there is more of a market for retail and micro-trafficking,” Gen. Oswaldo Peña Bermeo, commander of the army’s local Seventh Brigade, told Bogotá’s El Tiempo newspaper Jan. 13. He spoke just after his unit had eradicated 5,400 plants on a half-hectare plot at the vereda (hamlet) of Cafetales, in Lejanías municipality, Meta department. Gen. Peña Bermeo named the varieties as Colombia’s traditional “Punto Rojo” (Red Point), a stand-by sativa, and “Creepy”—a bit of a catch-all in South America for any hybridized indica strain.

Gen. Peña Bermeo implied a guerilla hand in the new cannabis economy, noting the presence of the FARC’s 26th Front in the area. But the stuff seems to be cultivated mostly for Colombia’s internal market. The account cites the Observatorio de Drogas de Colombia to the effect that cannabis is the substance of choice for 87% of the country’s “illicit drug consumers.” The traditional cannabis cultivation zone is in the central highland departments like Cauca and Tolima, but it has recently started to spread into Meta and other departments of the Llanos Orientes. One reason given for the switch is a rise in the costs of chemicals for processing coca base into cocaine, due to an international crackdown.

There is a sense of “back to the future” here, as Colombia’s countryside was famous for its cannabis back in the ’70s, before the marijuana syndicates morphed into the sinister cocaine cartels  This is a good sign of the general de-escalation in the country—peace talks with the guerillas, a halt to aerial eradication of coca with glyphosate, and moves to lift the pressure on cannabis.

But coca cultivation remains the economic mainstay for thousands of campesino communities across the country—and unrest in response to eradication continues, despite the dropping of the egregious glyphosate program. Bogotá’s Blu Radio reported Jan. 8 that some 100 campesinos blocked the highway along the Caribbean coast at Puerto Valdivia, Antioquia department, backing up traffic for kilometers, to protest plans to resume coca eradication in the area.