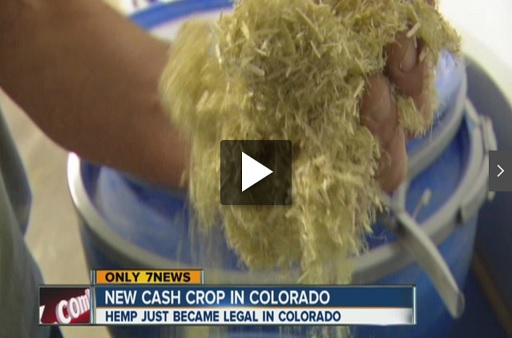 In this post from Tenth Amendment Center, Mike Maharrey reports how practical nullification of federal hemp prohibition in Colorado continues its march forward with the opening of the first large-scale industrial hemp processing plant.

Practical nullification of federal hemp laws in Colorado continues its march forward with the opening of the first large-scale industrial hemp processing plant.

Farmers in southeastern Colorado began harvesting hemp in the fall of 2013 after growing the crop was legalized in the state along with recreational marijuana. The PureVision Technology processing plant in Ft. Lupton recently began hemp processing, marking another step forward in nullifying federal prohibitions on hemp and establishing the industry in Colorado. In fact, some have called the Centennial State the “Silicon Valley of Hemp.”

Ed Lehrbuger runs PureVision Technology, and he gave an ABC 7 reporter a tour of the facility. It processes hemp stalks into pulp that can be made into paper, and sugar that serves as a basis for biofuel.

“Our tagline is pioneering the hemp revolution,” Lehrbuger said.

According to ABC 7, the plant has long processed corn stover and wheat stalks, but hemp harvests by farmers like Dani Billings created a demand for hemp processing.

“It’s going to save the world. It has thousands of uses, and it’s sustainable,” Billings told ABC 7. “Clothes, shoes, chairs, literally everything that we are in right now can be made from hemp. It just needs to get going.”

Company officials say the pilot plant will process a half-ton a day, and they plan to scale up to 25 tons a day by the fall in a larger facility as the hemp harvests grow.

Industrial hemp currently falls under the Controlled Substance Act of 1970. It technically remains legal to grow industrial hemp, but farmers must obtain a permit from the DEA, a nearly impossible feat. Up until last year, the feds maintained a policy of virtual prohibition.

In 2014, Pres. Obama signed a farm bill into law that includes a provision allowing a handful of states to begin limited research programs growing hemp. The hemp amendment allows, “state agriculture departments, colleges and universities to grow hemp, defined as the non-drug oilseed and fiber varieties of cannabis, for academic or agricultural research purposes. But the new measure applies only to states where industrial hemp farming is already legal under state law, and the feds still prohibit hemp production for commercial purposes.

The Colorado law completely ignores the federal ban, and farmers like Billings and companies like PureVision put the law into action. Colorado has effectively nullified the feds on hemp prohibition.

When Colorado took the lead, other states followed suit. Legislatures in Oregon, South Carolina, and Vermont passed similar measures. Farmers in Vermont began harvesting hemp in 2014. On Feb. 2 of this year, the Oregon hemp industry officially opened for business. Just one week later, the state issued its first license to a small non-profit group that hopes to plant 25 acres this spring.

Experts estimate some 25,000 uses for industrial hemp, including food and body products, clothing, auto parts, building materials, biofuels and other goods. The Hemp Industries Association estimates that the total U.S. retail value of hemp products in 2014 came in at $620 million. The U.S leads the world in hemp imports, getting most of its supply from Canada and China while the federal government maintains its prohibition.