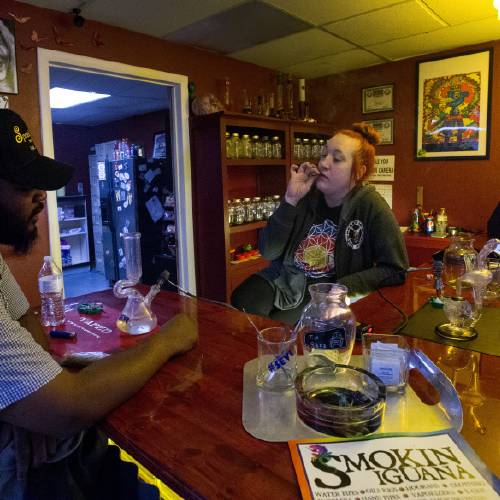 Cannabis clubs now are banned from Colorado Springs despite some slick maneuvers Tuesday by City Council members Bill Murray and Jill Gaebler to delay what appeared to be a foregone conclusion.

The 6-3 vote, with Councilwoman Helen Collins joining Murray and Gaebler, came after another hour of passionate testimony by club-goers and owners.

They have spent hours testifying and waiting to testify in multiple council meetings since September, when a six-month moratorium was imposed on the clubs. That moratorium expired Tuesday night.

“Amendment 64 rights are non-negotiable,” Correy told the council. “This is the reality. I will be seeking an immediate temporary restraining order today.”

But while Amendment 64 allows cities to ban recreational pot sales, nothing in it specifically cites cannabis clubs. They sprang up statewide after Amendment 64 was passed in 2012, as pot smokers sought a legal place to imbibe since public pot usage is illegal.

Many, if not all, of the clubs have been exchanging marijuana for “dues” or “donations” despite the law forbidding recreational sales in the city.

“We have a ban on recreational sales, but we aren’t enforcing it,” Murray said, moving that a vote on the ban be delayed for six months while the existing law be enforced.

Gaebler seconded the motion, but a legal adviser explained that such a motion would leave the city without even a moratorium.

So Murray suggested delaying the ban while extending the moratorium. But the moratorium couldn’t be extended without public notice and two public meetings, so Murray reverted to his original motion.

“We’re pushing all these community members back into neighborhoods,” Gaebler warned. “So many people don’t have a place to go, so they will end up (smoking marijuana) in our parks, open spaces and other illegal places.

“We’re not going to stop people from using marijuana by enacting this ban. We are on the wrong side of history.”

Collins said, “This is the reason I voted against the sit-lie ordinance, because it was unconstitutional,” targeting only two areas of the city. “I find issue with this (ban) also to be unconstitutional.”

That was Correy’s point. “Amendment 64 passed overwhelmingly in 2012,” he said. “Majority rules; that’s the system. … It’s in our supreme law to prevent local governments from tinkering with those supreme rights. Amendment 64 rights are non-negotiable. That is the reality.”

Featured Image: Emily McNamara smokes a joint with Black Angus Wednesday, March 16, 2016, at the Speakeasy Vape Lounge and Cannabis Club in Colorado Springs. The Marijuana club has been open for three years. (The Gazette, Christian Murdock)