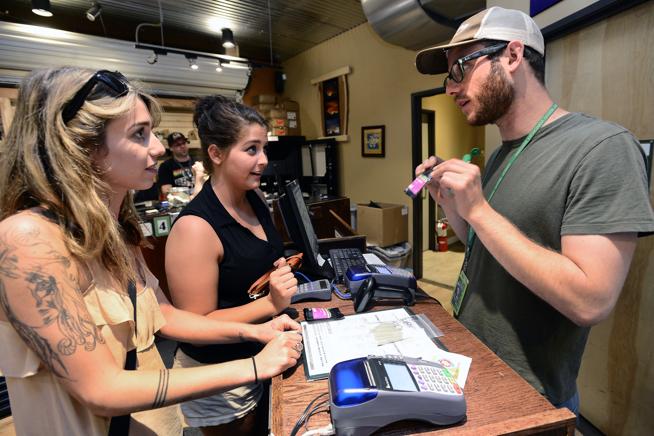 Boulder City Councilman Macon Cowles is seeking a relaxation of some of the city’s more strict recreational and medical marijuana regulations. This post from The Cannabist discusses Cowles’ four-page memo seeking changes and the Mayor’s response.

Cowles, who says he’s supported by Councilman George Karakehian, asked the City Council this week to “discuss all aspects of (marijuana) regulations and give direction to staff” at an upcoming study session on Sept. 17.

He wrote in a four-page memo that Boulder’s commercial pot rules are “out of step” with other jurisdictions and the state.

“It’s been a long time coming,” Cowles said in an interview. “I have become increasingly uncomfortable with marijuana regulations and the way in which they put Boulder pot businesses at a competitive disadvantage compared with others in the county and in neighboring jurisdictions.”

Cowles said he wants the City Council to address Boulder’s pot rules before the current council term expires on Nov. 10, when he and Karakehian will step down after deciding not to run for re-election.

He said he believes there are 40 or more items that are “stress points” in Boulder’s rules that don’t match up with the state’s or are unfair compared to other cities and counties in Colorado.

Rather than address each mismatch individually, Cowles is proposing that Boulder repeal its medical and recreational marijuana regulations and adopt a new ordinance that addresses only local application processes and inspections, and creates an administrative review process and a schedule of fines.

“It’s really time for us to scrap our regulations and accept the state’s standards, and then create a few pages of special rules that are strictly a matter of local concern,” he said.

Some of those stress points include marijuana business owners’ inability to appeal or challenge the finding of a violation by Boulder inspectors, Cowles said. Others include confusion on the meaning of branded merchandise, the use of coupons and grandfathering rules.

Though he’s open to discussing the regulations, Mayor Matt Appelbaum said he feels confident in Boulder’s current marijuana rules and wants to talk with other municipalities about their experiences.

“My general attitude is I think being cautious, conservative, whatever term you would use, has served us well,” he said. “And while I have no doubt that, as we learn more and as the industry matures, there will be items that need to be looked at again, I’m not yet convinced that we need a wholesale revamp of our regulatory approach.

“But I’d be interested to see what people have to say about it.”

Many Boulder marijuana business owners seem to be in favor of rewriting the city’s rules to make them more consistent with the state and other municipalities — and to help local businesses be more competitive.

“We hold licenses in Boulder and we hold licenses outside of Boulder, and I can say that some of the restrictions that exist within the Boulder code do inhibit businesses from establishing their brand or competing with other local jurisdictions,” said Chris Woods, owner of Terrapin Care Station.

Alison Ledden, marketing director for The Farm, said the company created a presentation for the City Council to outline all the ways that Boulder’s regulations create a “confusing and unduly burdensome” framework and impede the company’s ability to do business.

“Underlying all of this is a sense of, ‘Why are we being treated so unfairly? What did we do to deserve this?’” he said. “Because it’s like, ‘Wait a second, all of our colleagues all over the state have all these privileges and rights.’”

The Boulder Chamber also is supportive of a rule change, said president and chief executive officer John Tayer, because it’s heard from members about some of the challenges created by the inconsistencies in state and local rules.

“This is a new industry in our community and one that is contributing to our economy, and they should be treated like any other business,” he said. “To the extent that our local regulations are hampering their ability to be competitive or creating just an impractical enforcement environment for them, we really want to see the City Council step up and help address those issues.”