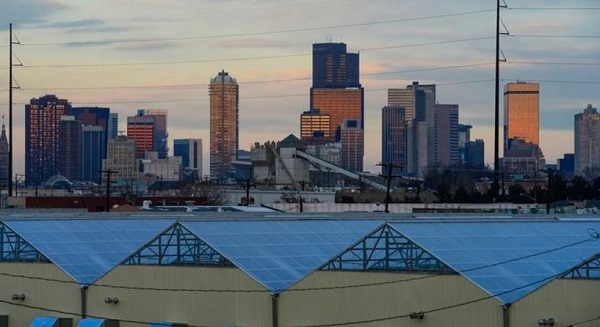 Recreational marijuana businesses have proliferated so rapidly in some of Denver’s poorer neighborhoods during the past two years that city officials are exploring ways to disperse future growth more evenly.

The pot boom in neighborhoods such as Elyria Swansea, Globeville and Northeast Park Hill in north Denver, and Overland to the south, wasn’t exactly unexpected, but it still has residents and community groups concerned.

Marijuana business owners say they’ve moved into the parts of town that city regulations restrict them to be. They say they work hard at being responsible neighbors in ways that include local hiring and community outreach.

“Between navigating the zoning laws … and finding amendable landlords willing to lease their properties to federally illegal businesses, the list of workable locations for marijuana dispensaries shrinks considerably,” John Lord, owner and CEO of LivWell, said.

The Denver Post used a city database of more than 600 marijuana business licenses to examine where industry growth has occurred and which neighborhoods faced the biggest transformations.

Facilities that grow recreational pot have concentrated along the I-70 corridor to the north and the Santa Fe Drive and I-25 corridors to the south, in neighborhoods where residential and light industrial areas mix.

Other marijuana-related businesses — medical dispensaries, retail outlets and marijuana-infused-product factories — have pocketed along thoroughfares such as Colfax Avenue, Federal Boulevard and Broadway, the analysis shows, and the neighborhoods that surround them.

“Many low-income neighborhoods are next to industrial sites. That’s just the lay of the land,” said Charlie Brown, a former Denver city councilman who led committees that studied and recommended rules on where the businesses could go. “To change the rules today is tricky.”

Neighborhood residents and business leaders say they’ve been concerned since the beginning that Colorado’s new marijuana industry would settle into their backyards and that communities of color and lower incomes would see a disproportionate share of those businesses.

“You would think we’ve borne our fair share already,” said Candi CdeBaca, a member of the Cross Community Coalition in Globeville and longtime resident there. Her home — in the family since her great-grandfather — faces a large marijuana grow operation.

“We’ve been around, and it happens over and over,” she said. “People who bet their life two years ago that this would happen would have won the bet.”

Odors from the pot grows and fears of rising crime and youth marijuana usage top the neighborhood concerns. There have been persistent complaints about unlocked trash bins — by law they are supposed to be padlocked when not in use — and vagrants picking through them for marijuana remnants.

City crime data show marijuana-related crimes from 2012 through November 2015 occurred most in Elyria Swansea, followed by Overland and Five Points. Globeville ranked fourth. Crimes appear to have increased only marginally after Jan. 1, 2014, when sales of recreational marijuana began statewide.

Residents say the potential benefits from a growing industry in the community, such as job opportunities, are less evident to them. They see marijuana as just the latest in a string of undesirable industries settling in their midst.

“The areas are the trash can of the Denver community, and that’s been the view for years,” said Vernon Hill, a Globeville resident and businessman who works with Globeville Civic Partners. “There are more junkyards and more salvage lots than other areas, but we have houses intertwined, too. It’s our home.”

Business owners say they try to be good neighbors.

“We’re passionate about doing what we can as a tiny little business doing our part in education and awareness … and hopefully helping the neighborhood,” said Meg Sanders, CEO of Mindful, which has a dispensary along East Colfax Avenue near Monaco Parkway.

Sanders said the company has hosted job fairs to attract employees from the neighborhoods where she operates and even passed out vegetables grown in the company garden.

But the concentration of marijuana businesses in certain areas has given city officials pause in allowing new businesses to be licensed. In November, the City Council placed a four-month moratorium on new licenses until officials can have a closer look at where shops are today, including taking walking tours of neighborhoods. There is talk of extending the moratorium for at least two years, perhaps up to four.

“We agree that there are enough marijuana businesses in Denver,” said Ashley Kilroy, executive director of Denver’s Office of Marijuana Policy. “Seeing the neighborhoods up close reinforces that feeling of saturation and also makes it apparent that there is still room for additional growth and expansion of the industry in an area that is already inundated.”