Even though Indica and Sativa are both marijuana, they’re entirely different. This post from Green Rush Daily compares and contrasts the two types of marijuana!

They’re the two ‘types’ of marijuana out there, and conventional wisdom holds that the effects of smoking one are different than the other. But what exactly are those differences? And why does smoking a sativa make you feel one way, and an indica another? What is the difference between indica and sativa? We’ve got a full rundown of everything you need to know.

The Subspecies of Cannabis

Cannabis is the scientific name for the plant whose flowers are the marijuana millions love to smoke. That’s something you probably already knew.

What you didn’t know is that there are three subspecies of the plant that are all very distinct from one another. The first two are Cannabis indica and Cannabis sativa – far and away the most recognized subspecies.

The third you’ve probably never heard of: Cannabis ruderalis. That’s because it’s way lower in THC than the others, so it’s rarely used for getting high.

The reason these subspecies are so different begins with where they first started growing. By cropping up in various parts of the world, they evolved different characteristics to adapt to their respective environments.

Where Did Indica and Sativa Originate?

Indica originally comes from Central Asia, in places like modern-day Pakistan and Afghanistan. As a result of the extreme climate in these areas, indica developed a variety of structural features to survive like its broad leaves and thick resin.

Sativa’s place of origin is quite a bit warmer, resulting in a much different subspecies of the plant. The original location of sativa has been traced back to the areas of Colombia, Mexico, and Thailand – all of which are right near the equator.

This resulted in a much more lanky plant; its leaves are thinner, and it grows much taller and less densely than indica. In fact, some sativa plants can reach heights of up to twenty feet. It’s this immense stature that makes the plant much better suited for outdoor growing.

Unsurprisingly, this difference in size comes with a difference in output. While you can expect to begin harvesting bud from your indica plant in as early as eight weeks, don’t expect much more than about two ounces of flowers.

Indica’s larger counterpart, the sativa plant, requires more time to mature – anywhere from 10 to 16 weeks. Once you reach the point of harvest, though, you can expect a much bigger yield. Depending on the size of the plant, you can get anywhere from 3 ounces to an entire pound for your trouble.

For those who do not grow their bud, though, these differences might not seem important. So let’s get down to what everyone wants to know: how do the effects of indica differ from those of sativa?

The Different Effects of Indica vs. Sativa 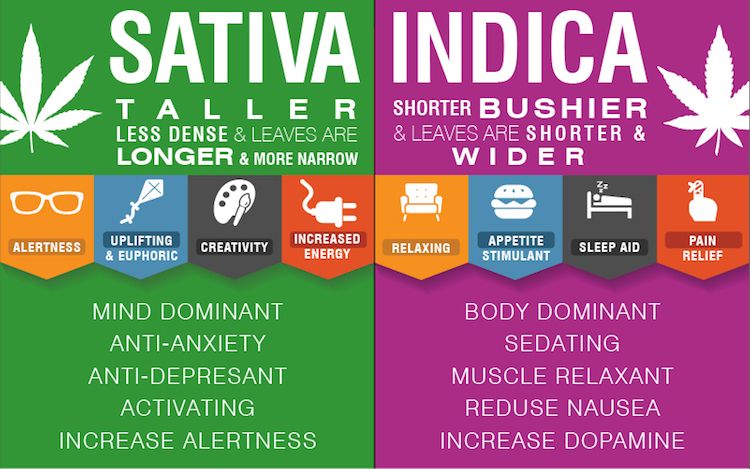 Many users have weighed in on how indica strains make them feel compared to sativa strains, and the consensus is fairly clear on the subspecies’ different effects. While there is obviously considerable variability even between the various strains of the same subspecies, some general characteristics of indica and sativa hold true.

Medicinally, indica is known to treat anxiety and insomnia. Some experts suggest that indica’s high CBD content is what’s responsible for its anti-anxiety properties. Whatever the case may be, indica is what you want if you just want to stay home and kick back.

Sativa creates a more energized, wakeful high than indica. Users report feeling creative and adventurous when under its influence. It’s this stimulant-like effect that makes sativa a common choice for use in the daytime.

From a therapeutic standpoint, sativa is particularly useful for treating fatigue and depression. Its ability to inspire action in users makes it ideal for this purpose.

Even though indica and sativa are both marijuana, they’re entirely different. Depending on what you want out of your high, you may want to try targeting a particular type of plant the next time you spark up.

For those who want a more balanced high, there are all kinds of indica-sativa hybrids out there as well. Whatever your needs, there’s certainly a strain out there that’s perfect for you. Try taking our quiz!

Source: What is the Difference Between Indica and Sativa Marijuana?