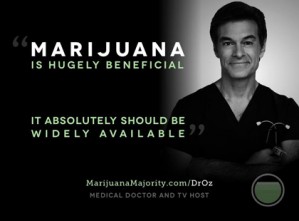 Popular TV physician Dr. Oz on Friday ran a positive story on medicinal cannabis. “Cannabis is a natural medicine which is less addictive and ultimately safer than opiates that are currently the standard of treatment,” said Dr. Mehmet Oz, who is a cardiothoracic surgeon. “And as a physician, I’d opt for the safer choice, given that option.”

Those with severe chronic pain have learned that our choices are limited, reports Devi E. Nampiaparampil, MD on DoctorOz.com. Medical marijuana is increasingly seen as an alternative to harsh, addictive pharmaceutical opioids which carry the threat of overdose.

Another problem with opioid painkillers is the phenomenon of tolerance, wherein the drugs become less effective over time, making larger doses necessary — and, once again, bringing up the danger of overdose, since taking too large a dose of opioids can depress the portion of the brain which controls breathing.

Cannabis, on the other hand, has never caused any lethal drug overdoses — and the number of opioid deaths appears to have decreased in states with laws allowing medical marijuana. It may be that the addition of cannabis is effectively replacing opioids for some people, and according to some studies it might also be boosting the pain relief patients get from the same dose of painkillers.