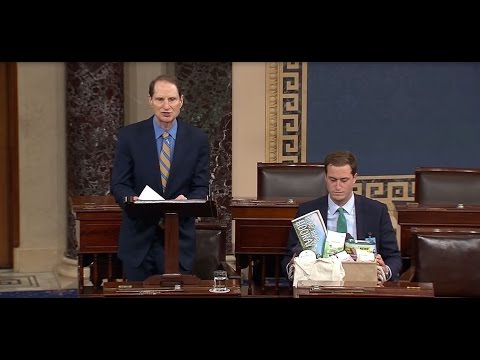 In this article from The Huffington Post, Matt Ferner reports that Senator Ron Wyden called for ending the federal ban on hemp production in recognition of Hemp History Week.

“In my view, keeping the ban on growing hemp makes about as much sense as instituting a ban on portobello mushrooms,” Wyden, who introduced a hemp legalization bill earlier this year, said on the Senate floor. “There’s no reason to outlaw a product that’s perfectly safe because of what it’s related to.”

Wyden showed senators a basket filled with products made in Oregon using industrial hemp, including protein powder derived from hemp seeds, hemp butter, hemp-based skin care products, and wood deck finish. Because of the U.S. hemp ban, raw material for those products has to be imported from countries that allow hemp cultivation.

Hemp comes from cannabis sativa, the same plant species as marijuana. However, hemp contains little to no THC, the psychoactive ingredient in marijuana associated with the “high” sensation. Other industrial uses include clothing, rope, fuel and paper.

Still, the federal government has maintained a longstanding ban on hemp under the Controlled Substances Act, which doesn’t distinguish between marijuana (the drug) and hemp (the plant).

“Marijuana and hemp are related species, but one should not be confused with the other, much like a chihuahua and a Saint Bernard,” Wyden said. “Mixing hemp in on a ban on growing marijuana is based on a lot of misconceptions.”

The U.S. is the world’s largest consumer of hemp products, but is the only major industrialized country that outlaws hemp production.

Wyden said hemp-based products contributed $620 million to the U.S. economy in 2014. The hemp used in those products must be imported.

“The federal ban on hemp amounts, in my view, to a restriction on free enterprise and it doesn’t accomplish anything but stifle job creation and economic growth,” Wyden said.

Wyden, along with a bipartisan group of lawmakers, introduced the Industrial Hemp Farming Act in January. The legislation would lift a federal ban on growing hemp by exclude industrial hemp from the definition of marijuana. It would allow farmers in any state to grow the crop.

American industrial hemp production peaked in 1943, with more than 150 million pounds from 146,200 harvested acres. Production ceased in the late-1950s as a result of “anti-drug sentiment and competition from synthetic fibers,” according to The Associated Press.

Hemp “was once a booming crop in America,” Wyden said. “It can, and should be, again.”

via Senator: U.S. Ban On Hemp Makes About As Much Sense As ‘A Ban On Portobello Mushrooms’.