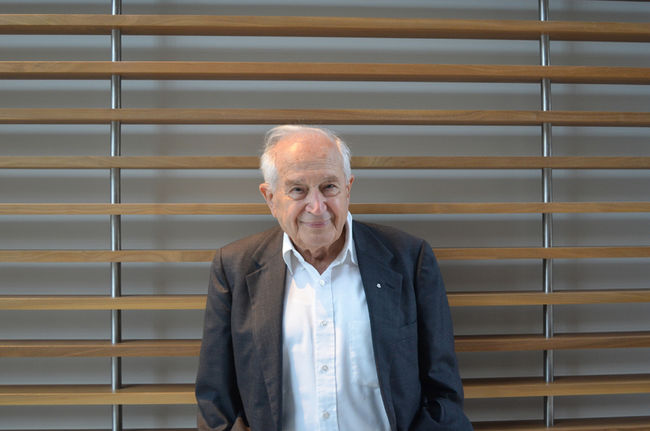 In this post from TheWhig.com, Anisa Rawhani turns the spot light on Prof. Raphael Mechoulam, who has spent the past 50 years studying the cannabinoid field and is known as the father of medicinal marijuana research.

He’s known as the father of medicinal marijuana research, but if you call Prof. Raphael Mechoulam that, he’ll just laugh.

But the name sticks, as he’s spent the past 50 years studying the cannabinoid field and is responsible for much of what we know today.

“From a medical point of view, here we have a treasure trove of material, which should be investigated.”

Mechoulam was born in 1930 to a Jewish family, when “the wounds of the First Wold War were not too painful anymore and Hitler was still considered a demented curiosity,” Mechoulam said in an interview with Addiction.

Over time, anti-semitic laws became unbearable and his family moved from village to village to escape. For a time, his father was sent to a concentration camp in Bulgaria.

Eventually in 1949, the family immigrated to Israel. Here, at the Hebrew University of Jerusalem, Mechoulam would receive his masters degree in biochemistry.

What first sparked Mechoulam’s interest in cannabis research, some five decades ago, was that no else seemed to be doing it.

“Morphine had been isolated from opium a century previously,” he said. “Many of the drugs that we have today are endogenous compounds, which have been modified to suit us — cortisone, for example.”

But that same research hadn’t been done for cannabis.

At the time, laws made cannabinoid research extremely difficult. But in the small country of Israel, there were less administrative hurdles.

The university head called the police and asked for cannabis for research.

Mechoulam was sent over to the police station, he picked up five kilos of cannabis and went back on the bus.

“People on the bus were saying, ‘what the hell is that smell?’ ”

Those first five kilos would lead to countless research papers published in scientific journals such as the Journal of the American Chemical Society.

For the first time, the active components of cannabis were being isolated.

Often, marijuana is associated with its psychological effects. The chemical responsible for that is THC. But THC is the only one of 100 compounds in marijuana that causes such effects.

At the same time as Mechoulam and his team identified THC, cannabidiol was discovered — an extremely helpful and potent anti-inflammatory compound.

At high doses cannabidiol is an anti-schizophrenic compound, but it’s also an extremely important anti-epileptic compound.

Today, there are children with epilepsy, who experience 20 to 30 seizures per day, who are treated with cannabidiol,

“(Epilepsy) destroys the children,” he said. “Many families will rush to Colorado, because they can get cannabis with cannabidiol to treat their children.”

“Nothing else helps them,” he continued. “I hope some day cannabidiol will be approved.”

Mechoulam has led a busy life, to say the least, but in the little spare time he has he enjoys spending time with his seven grandchildren, who range from six to 24 years old.

“Each one is different,” he said. One of his granddaughters, who’s 20, was a bomb specialist, and he teasingly calls her General Boom Boom.

But at 85 years old, Mechoulam hasn’t stopped his research. He’s currently focusing on the compounds that our brain and bodies produce. Some of these compounds protect us, blocking head injuries, while one blocks osteoporosis and bone disease.

via Prof the father of medical marijuana research | The Kingston Whig-Standard.