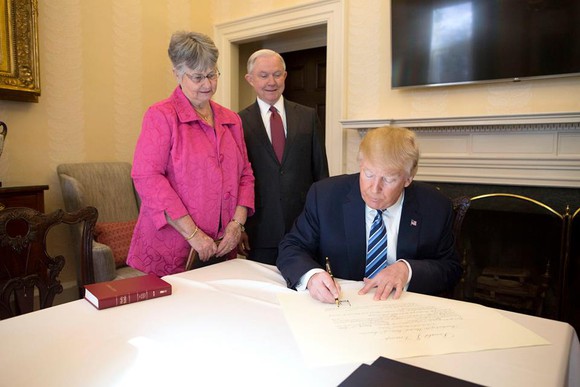 President Trump gives marijuana stocks a reason to celebrate. This post from The Motley Fool covers a short-term victory at the federal level for the cannabis industry.

With few exceptions, everything has seemingly gone right for the marijuana industry, and marijuana stocks for that matter, over the past couple of years.

The legal marijuana industry is budding before our eyes

Last year was a prime example of the momentum present in the pot industry. We witnessed five new states legalizing the use of medical cannabis for select ailments, bringing the total number of states to have done so to 28. Interestingly, two of these five states (Ohio and Pennsylvania) wound up legalizing medical pot entirely through each states’ legislature and without taking a vote to the people. That represents a previously uncommon method of legalization that may now grow in popularity for the two dozen states that don’t have the initiative and referendum process.

The number of recreational weed states doubled in 2016 to eight from four, with residents in Nevada, Maine, Massachusetts, and California, all voting to legalize adult-use cannabis. If not for Arizona where the recreational marijuana vote fell 2% short, the November 2016 elections would have been a clean sweep for the marijuana industry.

Rapidly changing public perception has played a key role in marijuana’s expansion. Both the 2016 Gallup poll and the more recently conducted CBS News poll found that the number of people who’d like to see the drug legalized nationwide hit an all-time high (60% and 61%, respectively).

The legal sales have been flowing, too. ArcView estimates that $6.9 billion worth of legal weed transactions were conducted in North America last year, and by 2021 there could be more than $22 billion annually. By comparison, $46.4 billion in sales were still derived from the black market last year. The opportunity to sway under-the-table consumers to the legal side of the equation is the draw lifting most marijuana stocks.

Yet, the biggest constraint on marijuana stocks and the industry as a whole remains the U.S. federal government. Despite individual states legalizing cannabis, federal law supersedes those approvals — and at the federal level, cannabis is a schedule I drug. Schedule I drugs are defined as being illegal, highly addictive, and possessing no medically beneficial qualities. Ouch!

This restrictive scheduling puts some cannabis-based businesses in quite the pickle. For example, many have trouble accessing basic banking services, such as a line of credit with a bank, or even something as simple as having a checking account. Financial institutions report to the Federal Deposit Insurance Corporation (FDIC), and since the FDIC is a federally created entity, it’s possible that at some point in the future the federal government could deem that any financial institutions helping marijuana businesses are accomplices in money laundering.

Pot companies also face tax restrictions. IRS tax code 280E disallows businesses that sell schedule I drugs from taking normal business deductions. The end result is marijuana-based companies paying tax on their gross profits instead of their net profits. Being able to keep less of what they earn, and having to deal solely in cash in some instances, are pretty substantial growth inhibitors.

There have also been recent rumblings from Capitol Hill that the Trump administration might tighten federal regulations surrounding the marijuana industry. In February, White House press secretary Sean Spicer commented that federal enforcement on cannabis would be stepped up during the Trump administration relative to the previous administration. Though his statement was vague, it’s had marijuana stock investors and pot-based businesses on edge.

These concerns were exacerbated by the appointment of Jeff Sessions as the next U.S. Attorney General. Sessions was an ardent opponent of marijuana’s expansion when in the Senate, and he’s regularly commented that he sees no medical or recreational value to expanding its use.

Sessions’ pot-killing dreams go up in smoke (for now)

However, last week the pot industry and marijuana stocks received some great news that’ll add a bit of near-term clarity to their operations.

With the threat of a government shutdown looming, Congress came together and passed a trillion-dollar budget bill that’ll fund the federal government through the end of September. Trump secured extra funding for military spending and border security, but Attorney General Jeff Sessions didn’t get a dime to go after states who’ve legalized marijuana.

The newly passed budget that Trump signed contains a provision known as the Rohrabacher-Farr amendment, which allows states to formulate medical marijuana policies without fear of federal intervention. There are 43 states specifically listed in the provision. In other words, at least throughout most of 2017, medical marijuana patients and established industries in more than two dozen states won’t have to fear federal intervention. That’s good news for the industry and marijuana stocks as a whole.

Even more than that, it signals that the federal government has more important issues for the time being, such as healthcare reform and tax reform, than to worry about what states are doing with their marijuana policy. Even with Session remaining an opponent, he’s unlikely to see a dime from the federal government over the near-term until these far more important issues are resolved.

It’s important to note that this doesn’t mean the weed industry is getting a free long-term pass. Spicer’s commentary in February shouldn’t be ignored. Once key reforms are passed, Sessions may have more leverage to exert the federal government’s influence on states that have legal marijuana laws on their books.

With the temporary cloud lifted, I’d surmise the most immediate “winner” among the marijuana stocks is San Diego-based Medical Marijuana, Inc.(NASDAQOTH:MJNA), which provides proprietary cannabinoid-based products to the pharmaceutical, nutraceutical, and cosmeceutical industries. Without the fear of intervention, Medical Marijuana is free to continue its expansion, which has included the introduction of new products and even investments in other pot-based companies.

It’s actually been a pretty killer past two weeks for Medical Marijuana, Inc., which also witnessed the lower legislative house in Mexico passing legislation that would legalize medical cannabis throughout the country. HempMeds, which is a fully owned subsidiary, is Medical Marijuana’s distribution branch in Mexico. If Mexican President Enrique Pena Nieto signs the medical marijuana bill into law, Medical Marijuana, Inc. will be able to export more than just cannibidiol-based product to Mexico, which should boost revenue and perhaps its bottom line.

Once again, just to be clear, this is a pretty short-term victory at the federal level for the marijuana industry. As long as Sessions is Attorney General, the risk for an industry crackdown is there. But, given how few positives are generated from policy in Washington for the pot industry, the recent passage of a new federal budget is something for marijuana stock investors and businesses to celebrate.