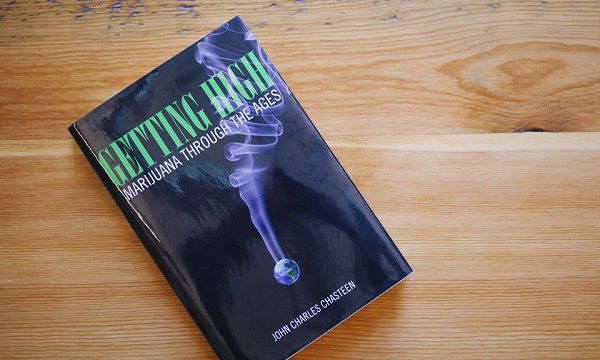 How, and from where, did marijuana get to Mexico? An excerpt from a new book, ‘Getting High: Marijuana Through the Ages’ goes on to answer this and more. This post from Leafly traces common hemp plant’s apparent transformation into psychoactive marijuana.

Where did psychoactive marijuana come from?

We know marijuana came to the United States from Mexico in the early 1900s. After months spent chasing Pancho Villa and his men, American soldiers returned home and brought with them packets of grifo, mildly psychoactive Mexican cannabis. At the same time, Mexican laborers brought marijuana with them as they migrated north.

But how did it get to Mexico? It’s not an easy mystery to unlock. The entirety of knowledge about the history of cannabis in the Western Hemisphere prior to 1850 would probably fit on a couple sheets of paper. By piecing together the evidence we can see that the story went something like this.

In the 1530s, one of the Spaniards led by Hernan Cortes set his forced indigenous laborers to planting Spanish hemp in the highlands around Mexico City. The historical record is sparse, but there are scattered mentions of hemp production on a modest scale through the 1760s. In the 1770s, the Spanish Crown launched a campaign to foment hemp production in Mexico. This met with indifferent success.

By the 1770s, though, another kind of production had quietly taken off. A priest of the Central Highlands by the name of Jose Ramirez learned that indigenous people not far from Mexico City were consuming preparations that they called pipiltzintzintlis, concoctions that gave them access to the spirit world.

Fearing pagan idolatry, the priest acquired a bit of the mysterious pipiltzintzlis and found to his amazement that, as far as he could see, it was simply the leaves and seeds of Cannabis sativa, or European hemp.

The hemp that European colonizers introduced throughout their North and South American colonies had never been used to get high. Although commercial hemp production never had much success in colonial Mexico, indigenous people continued to cultivate the plant for something other than fiber. When officials seeking cordage and sailcloth for the Spanish Empire asked Ramirez where they could find hemp seeds in Mexico, Ramirez told them. Go to the marketplace, he said, and ask for pipiltzintzintlis. Look for the indigenous herbolarias, the herb dealers.

Religious specialists among the indigenous people had used psychoactive substances for many centuries before the arrival of the Spanish. The Catholic Church condemned the use of pipiltzintzintlis, peyote, and teonanacatl because they represented the competition, so to speak–access to a religious experience outside the strict confines of the church. Therefore Mexico’s spiritual users of psychoactive cannabis kept a low profile.

The question remains: How did hemp develop into psychoactive pipiltzintzintlis? Apparently, between the 1530s and the 1780s, when commercial hemp production was fizzling, there nonetheless had been subsistence cultivation of Cannabis sativa, a few plants here and there in rural kitchen gardens. Mexico is one of the world’s hot spots of plant domestication. Corn, a Mexican creation, is a prime example. Domestic corn constitutes a triumph of early bio-engineering, entirely transformed from its wild progenitors. These botanical wizards also had experience with hallucinogenic flora that gave privileged access to the spirit world.

Anthropologists believe that the New World has so many more known hallucinogens than the Old–roughly ten times as many–not because it was providentially endowed with more, but because New World people were better at identifying and cultivating them. They gained this ability, hypothetically, by migrating through so many different climate zones to populate the Americas.

In view of all this, we shouldn’t be surprised if ten generations of indigenous Mexican botanists, aided by the blistering tropical sun, were able to discover and cultivate the psychoactive potential in European hemp.

Oddly, Ramirez’s discovery of pipiltzintzintlis was soon forgotten. Not until the 1840s does one find further evidence that marijuana existed in Mexico. And then, there it is: In 1846, the Mexican Academy of Pharmacy published a national pharmacopeia that registered the existence of two separate Mexican strains of cannabis: sativa, listed for its “emulsive seed,” and “Rosa Maria,” used for its “narcotic leaves.” Another name for Rosa Maria was a word that first appearance in print in the pages of the 1846 pharmacopeia: mariguana.

Within the next decade, a pharmacist of the University of Guadalajara mentioned that Rosa Maria was smoked in cigarettes, the first mention of that practice. (Pipiltzintzintlis seems to have been eaten. It was, in a sense, the original edible.) Further references followed in the 1860s and 1870s, as the word marihuana gradually became familiar to readers of Mexican newspapers.

Marijuana was very far from being a universal of Mexican life, however. Little known in the cities before 1850, it grew widely in the countryside, and the smokers of it were poor country people and mestizos, people in the not-Indian, not-European category of cultural/racial in-between-ness by which Mexicans increasingly defined their national sense of self.

Though not illegal, smoking Rosa Maria was considered un-Catholic. The innocent-sounding name was a reminder of the need to blow some smoke, so to speak, when mentioning the drug. The young rural men who gathered to pass a marijuana cigarette from hand to hand were not doing anything religious, not divining the future or gaining access to the spirit world. They were using marijuana more as a cheap substitute for pulque, a fermented beverage made from the maguey plant. And yet, the idea that marijuana was a “devil weed,” the idea that it was a bit pagan, that it produced madness and unholy violence–that had not completely vanished, either.

Then populations mixed. Beginning in the 1860s, national upheaval and war, followed by a period of rapid economic growth, stirred things up in rural Mexico. Soldiers and workers moved around the country. Along the way migrants passed through growing towns. These travelers were young men with zero years of schooling, jostled loose from tiny, traditional villages, now far from home, willing to try their hands at anything. They landed in the army, in labor camps, in rough neighborhoods where homeless drifters go to spend the night. Often they got in trouble for fighting. It was a commonplace belief that marihuana, like pulque and tequila, made them do it.
Prisons and military barracks were the two places most associated with marijuana smoking in Mexico by 1900. We should be clear about what that means. Marijuana had not turned these conscripts into soldiers, obviously, and neither had it turned them into prisoners. Rather, prisons and barracks created the ideal conditions for marijuana to substitute for pulque. Compared with alcoholic drinks, marijuana was much more easily smuggled and consumed. Prisons and barracks were also places of tough masculine society where the “devil weed” reputation could even be a plus. So “prisoner” and “soldier” were the most frequently mentioned identities of early marijuana users in the Mexican press. Other descriptors applied in print were lower class, degenerate, thieves, Indians, social dregs, and revolutionaries–along with various references to women, such as herbolarias, prostitutes, and soldaderas. The denizens of Mexico City’s underworld were said to loiter at cheap cafes smoking grifos and drinking coffee laced with cane liquor. Finally, there were also some middle-class dandies who dabbled with marijuana. A group of young dandies was said to meet at night in the shadowy cloisters of an abandoned convent, decorated with symbols of occult spiritualism, to smoke marijuana and read poetry.

Some women smoked marijuana, but press reports provide good evidence that men outnumbered them twenty to one. Women appear in the press reports much more often as suppliers than users. Herbolarias were not supposed to sell marijuana, but they remained the chief source of it for the urban population. Soldaderas, who traveled with soldiers to cook for them and take care of them in various ways, could be described as prostitutes or as soldiers’ sweethearts, overlapping categories at the time. Getting marijuana from the herbolaria and sneaking it to her man in a jail or a prisonlike barracks was a routine chore for such a woman, who may never have smoked it herself.

Mexican press accounts from the turn of the twentieth century present marijuana as a substance that turns smokers into homicidal maniacs after exactly three puffs. Here, in article after article, we find the origins of the “reefer madness” image later publicized in the United States by Harry Anslinger’s Federal Bureau of Narcotics. It’s an open question how much this “social script” influenced the behavior of the young men who were smoking the stuff. Did they feel themselves possessed by a devilish influence that made (or allowed) them to run amok? Press descriptions of fights under the influence of marijuana don’t differ much, in fact, from descriptions of similar fights under the influence of drink. Mention of alcohol in such accounts was twenty to a hundred times more common. And yet the Mexican press had absolutely nothing good to say about marijuana, whereas alcohol was a different, more complex story.

Alcohol was the active ingredient of lower-class pulque, but also of champagne and cognac, symbols of European chic in a country whose better-off citizens yearned for Europe. Only a smattering of bohemian middle-class Mexicans dabbled with marijuana, but all social classes drank. Immigrant families of German brewers were beginning to produce excellent beer in Mexico. Consequently, grisly murders, described with lurid detail in the yellow press, could not define the entire social meaning of alcohol, only its lowlife pathology, for the Mexican reading public. But they could, and did, define the entire meaning of marijuana. and marijuana’s indigenous image only made matters more embarrassing for the Mexican middle class, by reminding them of a Mexico that they preferred to forget.

All this gives us a much better picture of the backstory of marijuana smoking in the United States. The U.S.-built railroads that were stirring up the Mexican countryside also hired many Mexican workers and carried them north to the U.S. border. U.S. mining and ranching interests in northern Mexico wanted more strong young men with zero years of schooling, and soon U.S. labor contractors were signing them up to repair track or pick peaches north of the border. Nobody but the young men knew they smoked marijuana, until they got into fights…and the rest is history.

Now we can understand why Pancho Villa’s soldiers sang about marijuana, why migrating workers kept the stuff under wraps, and why respectable Mexican Americans had not the slightest interest in defending it. Finally, we can see where Harry Anslinger got the idea of promoting the Marihuana Tax Act of 1937 by showing congressmen pictures of mangled corpses. It had all happened before, to powerful effect, south of the border.