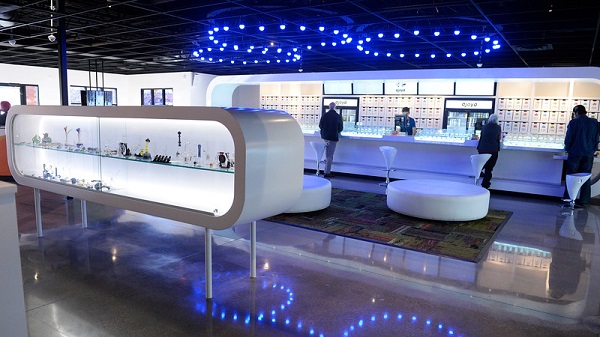 With marijuana legalization gaining momentum across the nation, pot shops are looking at high-end retail design for an exclusive edge. This post from The Cannabist highlights the trendy retail design of Ajoya, a new marijuana dispensary in Louisville, CO.

When marijuana first became legal, design was the last thing on the mind of retailers. They just wanted their stores open in a hurry so they could start turning all that bud into bucks.

The results, visually speaking, were disastrous. Early pot shops looked a lot like bail-bond operations or check cashing centers: simple, white rooms with metal folding chairs, maybe an Ikea print on the wall. Buyers interfaced with sellers though bullet-proof glass windows, as if no one, on either side of the transaction, was trustworthy.

Financially speaking, it was a different story. The money rolled in (and in) and the potential for the cannabis industry became clear. As competition heated up, retailers started looking for ways to distinguish themselves, and the idea of turning the once-shameful drug deal into a cozy retail experience caught on.

Two years in, design is emerging as a big part of the strategy, as the new Ajoya store in Louisville makes clear. It is as sleek as anything in the local shopping mall, a trendy boutique that aims to make the buying experience as pleasant as imbibing the products for sale.

The shop comes with considerable cred. It was dreamed up by the design firm Roth Sheppard, and overseen by principal Jeff Sheppard, the reigning Architect of the Year, as named by the American Institute of Architect’s Colorado Chapter.

The firm embraced the idea of working on a category of retail design with almost no precedent. In a sense, they got to invent the high-end marijuana store in Colorado.

For that, it found inspiration in several places. There main counter — clean, curvy and predominantly white — resembles something between the bar of a swank cocktail lounge and the pharmacy desk at a local drug store. Customers saddle up on glossy, single-leg stools and consult with their budtenders on the appropriate products.

The 2,000 square-foot showroom has undeniable roots in the most successful retail operation of our time — the Apple store. Only sample ware is on display and each object is shown off under glass, and in bright light. Products glow, especially colorful items, like raspberry red jellies and cocoa-colored chocolates. The pipes and vapes in the side cabinets seem to radiate from within.

Borrowing Apple’s sterile, sparse motif is a purposeful branding tactic. The retail marijuana business has matured in the past 24 months — products are now heavily regulated and the quality of offerings have risen, but it still suffers from an image problem and customers want reassurance that the things they buy are safe and healthy. A store that looks a little bit like a science lab or a medical center provides at least the aura of a hygienic environment.

While the job invited creativity, Roth Sheppard did have some limits. most of them financial. While Ajoya’s owners, brothers Joey and Shaun Gindi, committed to working with the state’s top architect, they still had the budget of any fledgling business owners. Sheppard calls the outlet “probably the least expensive retail project we’ve done.” The firm’s portfolio includes consumer gems, like the Room & Board furniture stores and the gift shop at the Denver Art Museum.

Ajoya has polished concrete floors and an exposed ceiling. To keep costs down, Sheppard, along with colleague Tyler Joseph, designed all of the cabinetry themselves and had it constructed during the build out of what was a raw cubby in a strip mall off Dillon Road. The fixtures are basically “wood with six coats of epoxy paint to make them look slick,” Sheppard said.

Marijuana stores have special security needs. Visitors have to be screened and ID’s at the door and many customers still pay cash (though Ajoya does take cards). Roth Sheppard worked to hide the security. It built a large welcoming counter that customers must pass as they enter, but kept it low and round so it’s less imposing. The store also has a distinct area where it sells medical marijuana, with a separate entrance and sales counter, essentially mini-version of the main space.

The Gindis said their primary goal was to avoid the traps that make many existing shops unappealing. Mirroring contemporary design was key — the site has none of tie-dye trappings that hark back to the plant’s hippie days and there’s none of the clutter that characterizes neighborhood shops that jam counters and cases with product.

Ajoya hopes “to take that out of the picture,” as Shaun Gindi puts it. The store is meant as a destination, for Boulderites with some cash to spend, or tourists who want to experience the posh side of pot when they come to Colorado. The design is clearly meant to sell a specialized image.

If the plan works, the Gindis hope to replicate the store’s motifs in future operations. If it works really well, other retailers will likely replicate it, too.