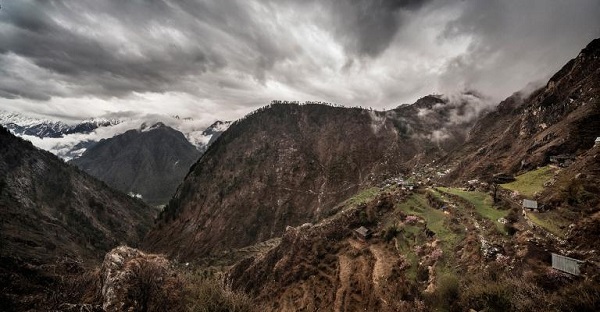 Cannabis is illegal in India, but many Himalayan villages rely on cannabis cultivation for survival. This post from National Geographic gives a peek into the humble and tough life in these villages.

In the Himalayas of India, small villages thrive by growing cannabis.

This is one of them. The village, perched on a mountain at 9,000 feet (2,700 meters), is only reachable on foot. The hike takes three hours. Villagers say it’s been a good season so far—police have only shown up to cut plants twice. But those plants are a drop in the ocean. Ganja grows wild in the Indian Himalayas, and it’s nearly impossible to curb its illegal cultivation.

After harvesting the cannabis indica, farmers spend hours slowly rubbing the resin from the plant’s flowers to create charas, a type of hashish that’s considered to be some of the best in the world. It can cost up to 20 dollars per gram in the West. Cannabis is illegal in India, but many villagers have turned to charas manufacturing out of financial necessity.

Charas gets more valuable every year, but the farmers still live a humble life. Most fields are small, and 50 buds of ganja produce only 10 grams of charas.

Sadhus—Hindu holy men who went to the Himalayas in meditation—were among the first to make charas. When hippies began following sadhus through the mountains in the 1970s, locals, who had been smoking a rough mix of resin and other parts of the plant, began making charas, too. They follow the same technique today to produce what’s estimated to be tons of charas a year. There are no official figures for India’s charas production or cannabis cultivation. Because it’s illegal, the Indian government has never conducted a large-scale survey to assess cannabis production within its boundaries.

Because cannabis is a native plant, it can be difficult for police to trace producers, who keep moving their fields higher to escape raids. Thousands of families in the region survive on charas production. Farmers sell the resin to foreigners, but also to Indians from big cities. Demand is rising; new guesthouses and venues for smoking charas sprout every season.

Though the drug trade is intricate and advanced, time almost stands still in this part of the mountains. Life follows the rhythms of nature. The villages scattered on the Himalayan slopes are made up of colorful houses with dark roofs made of thin stone slabs. There’s one central tap for water, an old temple, and a few shops that sell soap, cigarettes, legumes, rice, and flour.

The history of cannabis in India dates back thousands of years. It’s mentioned in sacred Veda texts. And it’s said that Lord Shiva sat in meditation on the snowy peaks of the Himalayas, feeding on ganja flowers. Yet today, it’s all about business, with villagers selling charas to survive.

Himalayan communities are proud and very secretive. Strenuous workers, they live in extreme conditions and often with no alternative career options. Many farmers have never cultivated anything legal in their life. Cultivation, production, use, context—everything is imbued with spirituality and religion.

Along with many other countries, India joined the global fight against drugs in 1961 by signing the UN Single Convention on Narcotic Drugs. But not everyone was ready to abandon cannabis, which has long been part of religious rituals and festivities. It took 24 years for India to translate its commitment into law. The country banned cannabis in 1985.

“Nearly 400 of the 640 districts in India have cannabis cultivation,” says Romesh Bhattacharji, ex-Narcotics Commissioner of India. “It’s time for the Indian Government to stop being a slave of UN-backed policies: since 1985, cannabis use and cultivation has only proliferated. Prohibition has failed.”

“The obligation to eliminate cannabis in countries with widespread traditional use is a clear example of the colonial background of the [UN] Convention,” says Tom Blickman, from the Dutch think-tank Transnational Institute.  “It would never pass nowadays.”

Source: See Inside the Himalayan Villages That Grow Cannabis