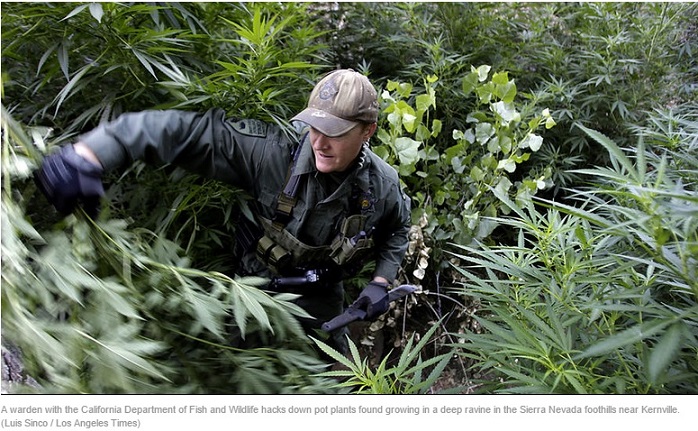 The measure, one of 16 bills signed by the governor Friday, is meant to expand the powers of the state Department of Fish and Wildlife at a time when illegal marijuana operations are expanding significantly.

Sen. Bill Monning (D-Carmel) introduced the measure based on concern that since California voters approved medical marijuana use in 1996, the number of illegal growing operations in state parklands and forests has increased.

Last year, state agents participated in nearly 250 raids on illegal marijuana operations in which 609,480 marijuana plants were eradicated and 15,839 pounds of processed marijuana was seized.

Investigators found more than 135 dams or diversions in rivers and streams that resulted in the theft of about 5 million gallons of water for marijuana grows.

Though stream diversion is already subject to civil fines, the new law signed by the governor would provide for fines of up to $40,000 for illegally dumping many kinds of hazardous materials into rivers and streams, and fines up to $10,000 for removing trees or trapping and killing wildlife.

“The need for flat, fertilized land to cultivate cannabis plants has forced some bad actors to eliminate native vegetation and destroy forested habitat, often bulldozing acres of land with no regard for its ecological effects, Monning said, adding that it can cost up to $15,000 per acre to clean up and restore each acre damaged.

The measure by Sen. Tony Mendoza (D-Artesia) allows the court to provide additional penalties as factors of aggravation in drug cases where occupied residences are within 200 feet of a methamphetamine lab and 300 feet of concentrated cannabis manufacturing.

The measure was requested by the California District Attorneys Assn. because of concern that the process for making the two drugs involves volatile chemicals that have been known to cause explosions and fires.

Brown on Friday also vetoed a bill by Sen. Andy Vidak (R-Hanford) that would have required the state Department of Education to gather and post on its website data showing how many students are transported to school by bus at each school district.

Vidak argued that education agencies need the data for administrative purposes, including the ability to compare their efficiency levels with other agencies.

Brown said nothing prevents the Department of Education from requesting the data if it is useful.

“While well-intended, I am unconvinced that this voluntary data collection would produce meaningful information or is a valuable use of limited resources at the local or state level,” Brown wrote in his veto message.