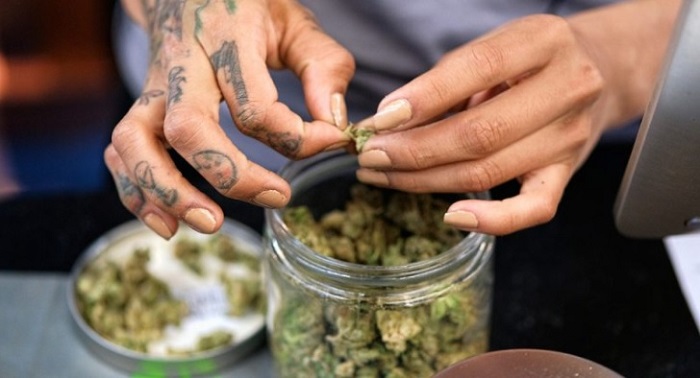 Los Angeles is racing to get ready to be the biggest legal marijuana market in the world. This post from The Cannabist highlights how with about 10 million people in Los Angeles County, the market potentially eclipses entire states like Colorado and Washington.

With the cannabis industry set to be legalized in California at the start of next year, the pressure is on for Los Angeles, as some anticipate that the city will be among the hottest marijuana markets in the country, if not the world.

“It’s the California gold rush again – it’s the ‘Green Rush,’” said Greg Meguerian, owner of The Reefinery medical marijuana dispensary in Van Nuys. “The world’s paying attention, and at the end of the day, this is Los Angeles. It’s going to be the largest market in the world … it’s going to be huge.”

“If I’m a tourist from another country, why would I go to Washington if I can go to Hollywood?” he said.

The revenue projections appear rosy to those cannabis businesses looking to be a part of the Los Angeles market. Some believe that with about 10 million people in Los Angeles County, the market potentially eclipses entire states like Colorado and Washington, which have already legalized marijuana.

But with less than four months to go, city officials still have a hefty workload ahead of themas they race to meet a mostly self-imposed Jan. 1 deadline to set up a program that could potentially issue licenses to dispensaries, cultivators, distributors and other sectors in the industry.

And once licenses become available, demand is expected to be high in the Los Angeles area, compared to other parts of the state. A survey of cannabis businesses conducted by the state Department of Food and Agriculture in 2016 found that there were 2,718 companies interested in getting licenses in Los Angeles County, which is the highest number of the counties mentioned in the survey, followed by 1,415 for San Diego, 1,177 for Sacramento and 1,141 for Alameda.

Local licenses are critical because cannabis businesses must obtain them before they can even begin to apply for a license with the state.

But some groups representing cannabis businesses are concerned Los Angeles city officials may be cutting it close, and it could be well into next year before a licensing program is available to many that want to operate.

The city is not expecting to adopt local regulations until the end of October, with licensing applications expected to be made available in November. Hiring has not quite begun for the city’s cannabis department, which will be tasked with processing applications.

City Council President Herb Wesson has been leading the process for developing the regulations for L.A.’s cannabis industry, and says he is “guardedly optimistic” that the city will be able to get a licensing program running before January.

His aides said they are aiming to get regulations adopted by the end of October, and the application process started in November.

Businessman Brian Blatz, who has spent the last two years getting his marijuana distribution business ready to enter L.A.’s market, said that there have already been delays and any further ones would be hard to take, as he does not plan to start operating until a license is issued to him.

“I won’t move a stem until we have, at the bare minimum, a local license in Los Angeles,” he said.

Blatz said he is expecting to begin paying rent next month on a facility in Los Angeles, which means there will soon be more bills to pay, despite not being able to earn income.

“I’m interested in the city of Los Angeles, as I know a lot of people in this industry are, and they’re trying to be as patient as possible,” he said. “But it’s very difficult … I have investors, and I have money at risk. Every time that they delay or hold back on the licensing, it costs us a lot of money.”

Blatz said ideally he would want Los Angeles to make licensing applications available to businesses like his starting in November, so that he could be ready to apply with the state on Jan. 1.

Some businesses say that while they are eager to be a part of the Los Angeles market, if the process takes too long, they have other options.

“There’s definitely the desert cities around us that have moved much more quick,” said Ryan Jennemann, who co-founded THC Design, a cultivation company based mostly in Los Angeles.

“We are very actively looking at surrounding cities right now,” he said.

There are also a few legislative hurdles to get through for the city, before it can launch its cannabis licensing program. The L.A. City Council still needs to weigh in on a “social equity” component to the regulations that would give licensing priority to those that have historically been most affected by drug law enforcement policies, such as the federal government’s so-called “war on drugs,” a crackdown that led to many minorities being incarcerated.

With worries that L.A. may not be able to make licenses available to many operators by Nov. 1, some in the industry are pressing the city to develop an application process that can feasibly be completed by cannabis businesses in time before Jan. 2, so that those businesses are not left out when the state makes its applications available.

City officials have some motivation to get its licensing program set up sooner than later. The industry is expected to be a boon for city coffers, with estimates coming in at around $50 million in tax revenues for the first year of licensing, according to figures projected by Los Angeles City Controller Ron Galperin’s office.

Meanwhile, as city leaders work to shepherd its licensing program through the process, illegal cannabis businesses, including cultivators, continue to feel the threat of being shut down through ongoing enforcement by state and city authorities.

Erik Hultstrom, who co-founded the Southern California Coalition, a trade group that has lobbied on behalf of its cannabis business members, said that he believes “the city really wants to get it done right,” so the process to set up the licensing program might not go as quickly as some are hoping it would.

But that leaves some businesses, which supply cannabis or provide services to dispensaries, operating in a “limbo,” making them vulnerable to enforcement actions by the city, he said.

Some cultivators have complained of aggressive enforcement from the city, and say that they have had to let go of employees and take apart their facilities.

Hultstrom, who is also the president of a cultivators trade group, said he supports interim measures providing “short-term clarity,” that could “keep unnecessary enforcement from happening to the good operators.”

But some operators have been willing to take the risk, despite this uncertainty. Jennemann, who started the company in the Bay area, said he moved to Los Angeles in 2014 because he saw promise in L.A.’s market.

“I wanted to position my company to have a foot in the (door of the) largest market in the world,” he said.

“Granted I can make my product somewhere else,” he said. “But the bulk of it is still going to be sold in Los Angeles, so I’d like to have my roots in the city where most of it is being sold.”

Featured Photo: A budtender weighs out marijuana for a customers on April 15, 2017, at ShowGrow, a medical marijuana dispensary in downtown Los Angeles. (Richard Vogel, Associated Press)

Source: Los Angeles races to get ready to be biggest legal marijuana market in world