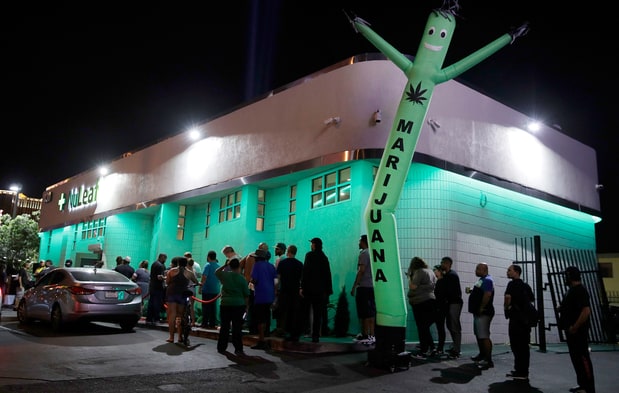 Pot prices have risen 200% as demand outstrips supply in Nevada. This post from Forbes reveals how weed shortage and spiked up prices are ruling the market.

Nevada’s recreational marijuana sales have only been legal since July 1 and the market can’t keep up with the demand. A combination of last-minute distribution issues and larger than expected sales have caused unnecessary stress among dispensaries and producers alike. The results have led to a 200% increase in the price of marijuana in just one month.

Brayden Sutton, CEO of Friday Night Inc. said the price per pound for trim has gone from $150 to $450 in one month. Friday Night Inc. owns a subsidiary called Alternative Medicine Association which grows cannabis and produces products that include traditional marijuana flower, pre-rolled joints, and edibles. “We still have healthy margins, but it’s a good indication of what the market has done,” Sutton said if they can grow it or make it, it sells out immediately.

While the initial problem has been the fact that there are only two distributors for the retails outlets, Friday Night Inc. signed a deal with Blackbird Logistics to do the physical deliveries themselves. “Right now, the retail stores are really struggling with keeping a consistent product on the shelf and meeting demand,” said Sutton. “They are constrained by what cultivators can produce, which is nowhere near what they need to be right now.” Sutton is expanding his facilities to increase production. The state has 88 approved cultivation facilities.

“We predicted the supply issues in Nevada when the demand for the products quadrupled overnight,” said Joel Milton of Baker, a customer engagement platform for dispensaries. “Nevada did not issue enough cultivation licenses, and it does not help that the production cycle from seed to sale in cannabis is untimely,” Milton said that most of their dispensary clients are experiencing a 3-4x increase in foot traffic and 74.2% of the sales are recreational versus medicinal. Baker is also seeing some of the same purchasing patterns among customers that it has seen in other legal recreational markets.

Milton said, “Recreational customers substitute the most popular medical category, flower (marijuana buds), for more convenient and discreet products. Items like vape pens, or single-use products like pre-rolls and single-serve edibles are much more popular for recreational users and tourists. Pre-rolls were found in 9x as many orders since recreational went live.” The long lines have motivated many customers to pre-order online and the dispensary owners like using the Baker retail software because it helps them serve the customers more quickly, which helps reduce the lines.

Many of the customers in Nevada are tourists and they are most interested in products that are convenient and something they can use over a weekend before they head back home. These customers don’t want to buy large amounts of traditional marijuana buds or products that require lots of accessories. This is why the vape pens and pre-rolled joints are so popular.

Nitin Khanna, Chief Executive Officer of Cura Cannabis Solutions, a cannabis oil company pointed out that in Nevada, people can’t consume marijuana outdoors or in their hotel rooms and there are no lounges where it is legal to smoke a joint. So, while the pre-rolled joints are popular now, Khanna believes that is because it is a familiar method of consumption to tourists. He thinks as the consumer begins to try vapes, they will make a switch. “Our assumption is Nevada is going to be the biggest vape cartridge market probably anywhere,” he said.  “The product that we are launching in our Nevada market is really our lowest THC product. It’s called Social. And the Social product comes in vanilla, watermelon, blueberry, and strawberry. The exhale has no cannabis smell to it, and so the people are able to consume without actually being able to be noticed. It’s a very discreet disposable cartridge.” Khanna said that many customers are new to the market and tend to be drawn to lower THC products. “They still have shows and concerts to go to and gambling.”

Sutton’s company Friday Nights Inc. had initially projected that it would have sales of $5 million for 2017, but he conceded that Alternative Medicine Association is currently recalculating its annual projections and how it can fill those increased needs. The cannabis businesses that gambled on Nevada are finding that the payoff has been very good.

Source: Pot Prices Rise 200% In Nevada As Product Flies Off The Shelves