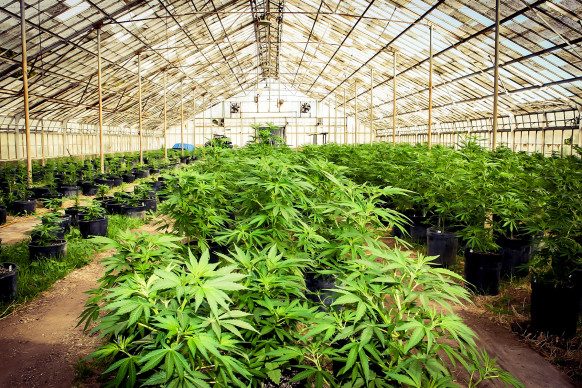 Non-existent pesticide residue regulations for marijuana, at the national level, have led to a situation where nobody knows what to do about the unchecked use of pesticides by legal marijuana farmers. This post from Wired highlights the circumstances leading to this state of affairs.

THE MARIJUANA PLANT’S worst enemy is so small it’s practically invisible. On weed farms around the country, spider mites attack leaf cells one by one, sucking out chlorophyll like teeny tiny green vampires. If the mites kill enough cells, the whole plant is a goner—an expensive problem considering a single mature marijuana plant is worth as much as $4,000. That’s why more and more, farmers have turned to pesticides. Lots and lots of them.

Unchecked pesticide use has long been the status quo in the anything-goes world of illegal weed farming. But as states legalize marijuana for both recreational and medical use, they’re trying to crack down on the toxic chemicals. In late April, Denver officials quarantined 60,000 plants—worth millions—at a single grower, the latest in a string of punishments for growers using dangerous pesticides. “There was 30 or 60 day period where we were receiving multiple complaints a week” says John Scott, pesticide program manager at the Colorado Department of Agriculture. But exactly what constitutes a dangerous or even illegal pesticide is a tricky, tricky question.

The problem goes back to, you know, a small technicality: Marijuana is still illegal under federal law. That means the Environmental Protection Agency can’t approve any pesticides for use on marijuana. States have been striking out on their own with wildly divergent policies. Twenty-three states have legalized cannabis for recreational or medical use; six have no pesticide regulations at all, while at least another five ban either all pesticides, or all but the most benign—like garlic and rosemary oil.

Why can’t weed farmers just use pesticides approved for food? Cannabis is both eaten and smoked, which adds an extra wrinkle in safety tests. As an EPA report on pesticides on tobacco notes, “absorption from the lungs is usually very rapid, often equivalent to IV injections.” The health risks are different.

So right, tobacco. That’s smoked—why not just apply pesticide guidelines for tobacco to marijuana? Because they don’t entirely exist. The EPA does approve pesticides for use on tobacco, but it does not set limits for pesticide residue on tobacco like it does for all food crops. The tobacco industry has a lot of lobbying influence, sure, but so many nasty things are in tobacco already that pesticides aren’t the biggest problem. When it comes to growing cannabis for sick patients, though, regulators can’t be so cavalier about pesticide residue.

Without the EPA stepping in to set pesticide residue limits, states are unlikely to set limits themselves. “Establishing those limits would require very expensive testing to say a certain level is safe,” says Donald Land, a chemist at the University of California, Davis and scientific consultant to the marijuana testing company Steep Hill Labs.  “That’s what hasn’t been done and is unlikely to be done soon going forward.”

That leaves cannabis as terra incognita for pesticide regulators. “There’s no other product out there like it,” says Larisa Bolivar, executive director of the Cannabis Consumers Coalition. “We want to see the cannabis industry treated as its own industry.” The EPA has told states like Washington and Colorado that farmers can apply to use certain pesticides for marijuana under a “special local needs” registration. It’s a slow process, though, that can take years.

States will need to formulate tests for catching residues in buds or edibles sold in stores, too. To look for pesticides and other contaminants, labs usually use a machine called a mass spectrometer, which characterizes the size and charge of molecules in a sample. A particular pesticide will have a unique molecular signature. The way some current state laws are written, though, thousands of pesticides are banned from marijuana. “If I had to make a test to test for thousands of pesticides, that test alone would take many thousands of dollars and weeks to calibrate all the instruments,” says Land, “It’s virtually impossible and nobody would pay the price to actually do that test.” More practically, states will have to come up with a list of a few dozen common but illegal pesticides for which to test.

The state-by-state legalization of marijuana is a great federalist experiment. But it’s creating real headaches for those states on the leading edge of legal pot right now. “We work within what our regulations allow,” says Scott. “That’s really the world we have to live in.”

Source: Nobody Knows What to Do About Pesticides in Legal Marijuana | WIRED