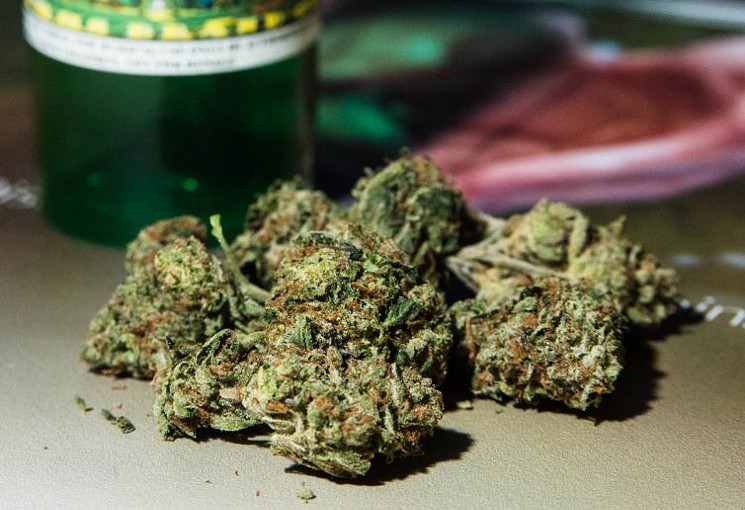 Gov. Jerry Brown was expected this week to sign a package of bills that would finally create statewide rules for medical marijuana dispensaries.

The legislation requires pot-selling collectives to obtain state and city permits. The city of Los Angeles doesn’t offer such a permit. In fact, dispensaries are technically prohibited in town. Proposition D, approved by city voters in 2013, only provides “limited immunity from … enforcement” to 135 shops open and compliant before a 2007 “interim control ordinance” on weed sellers was enacted locally.

Those stores, whittled down to 125 as a result of closures and lack of compliance, according to the City Attorney’s Office, are commonly known as pre-ICO.

An organization that represents a core group of those pre-ICO shops, the Greater Los Angeles Collective Alliance (GLACA), submitted input for the legislation. GLACA president and founder Yami Bolanos says the alliance isn’t worried that the package of three bills will shut down medical marijuana retailing in L.A.

Above-board cannabis operations have long wanted the state to step in and recognize their legitimacy. Without it, they have argued, operating in the Golden State has been like running a business in a legal gray area. Until now, for example, there was no such thing as a state permit for collectives.

“It’s better to deal with it and regulate it,” Bolanos told us. “Changes and amendments need to be made.”

GLACA is confident that either the L.A. City Council will provide permits or the Legislature will come up with an amendment to the legislation that allows the pre-ICO dispensaries here to survive without such municipal paperwork.

“We’ve already started working on that,” Bolanos said. “We’re in the process of hiring a lobbyist and we’re talking to City Council.”

A representative of L.A.-area Assemblyman Reginald Byron Jones-Sawyer, who co-authored a key piece of the legislative package, said, “We plan to do cleanup legislation in January to address this issue.”

The new rules will create the Bureau of Medical Marijuana Regulation under the state’s Department of Consumer Affairs. Operators seeking permits would be subject to “in-depth investigation” by California authorities, according to a fact sheet.

Dispensaries would have to obtain a local license to operate, and “renewal of a state license is contingent upon continued compliance with local ordinances,” the fact sheet says.

Rob Wilcox, a spokesman for the L.A. City Attorney’s Office, said, “We will be analyzing the impact of this legislation and will be advising the mayor and City Council accordingly.”

Los Angeles was originally allowed to keep its Proposition D framework for local shops — essentially an exemption from the local licensing requirement — but that caveat disappeared in final language.

California cities that expressly permit and license dispensaries do exist, by the way: San Francisco is one of them. So is West Hollywood.

Backers of the main piece of legislation, AB 266, say there was no opposition on record. That’s a milestone. The California Police Chiefs Association, a powerful lobbying group oft opposed to anything pot-related, was on board. So was the League of California Cities, which hasn’t always seen eye-to-eye with dispensary operators. Pro-pot group Americans for Safe Access was down with the law, too.

The office of Gov. Jerry Brown provided input and helped to shape the final language for all three bills (including SB 643 and AB 243) that compose the new rules.

Still, there’s a lot of griping out there from dispensaries that didn’t appear to register their distaste during the long process of negotiating this legislation.

Dave Hodges of the  All American Cannabis Club in San Jose argues the package “was influenced a lot more by the League of California Cities than anyone else.”

He estimates there are 2,500 dispensaries statewide (Bolanos thinks there are 1,500 in Los Angeles alone), and that only 300 would qualify to survive under the new rules.

“In order to control this, the locals have to come up with detailed regulations on how you can have one of these operations,” Hodges told us. “It’s pretty unfair for a city council to ban dispensaries without giving the people who live in that city a direct say in the matter.”

Hodges thinks the rules are so restrictive that they’ll only inspire collectives to operate illegitimately. The profit motive is too strong. “You’re not going to get rid of this stuff,” he said.

Dale Gieringer, state coordinator of California NORML, which supported the legislation, says it was quite “an accomplishment … keeping everybody on board.”

“I think it improved the final product,” he said.

“Not everybody’s happy,” Gieringer admits. “But there are plenty of industry people praising it.”

Bolanos of GLACA said those unhappy with the new rules should have been submitting input to lawmakers “instead of griping.”

“Welcome to the adult world where you have to follow the law and regulations,” she said. “That’s what we’ve been begging for for years. Give us rules so we can be respected.”

Of course, the rules heavily favor shops like the ones that belong to GLACA.

And, Bolanos says, her members expect that if recreational legalization is approved by voters next year, pre-ICO dispensaries would be the ones allowed to sell pot to anyone older than 21.

The dispensary rules aren’t scheduled to take effect until 2018.