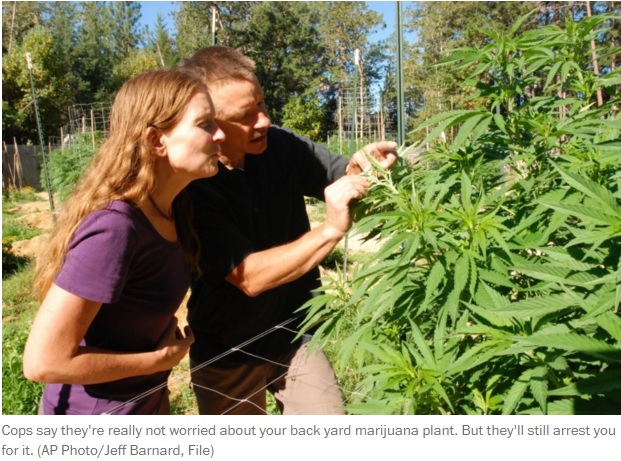 Despite marijuana being at the Bottom of DEA’s drug threat list, marijuana arrests continue unabated. This article from The Washington Post speculates on why the police continues to focus on marijuana-related offenses.

America’s cops overwhelmingly do not see marijuana as a major threat to their communities, according to results of a survey released this week as part of the Drug Enforcement Administration’s “2015 National Drug Threat Assessment Summary.”

The DEA asked a nationally representative sample of over 1,000 law enforcement agencies what they saw as their biggest drug threats. Marijuana came in at the bottom of the list, named by only 6 percent of survey respondents. The share of law enforcement agencies naming pot has been declining steadily since the mid-2000s, even as states have moved to legalize medical and recreational marijuana during that time period. 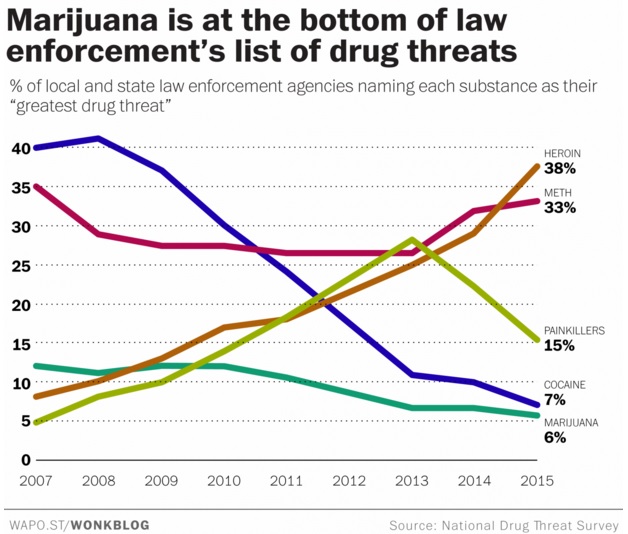 By contrast, nearly three quarters of police departments named heroin and meth as their top drug threats this year. The perceived threat of heroin has more than quadrupled since 2007, according to the survey. And after rising sharply from 2007 to 2013, the threat posed by prescription painkillers has subsided considerably in the past two years.

The findings indicate a statement by law enforcement of a fact that drug policy experts and researchers have known for a long time: compared to other recreational substances, including alcohol, marijuana doesn’t cause that much harm. It’s probably even safer than many people think. And whether you’re worried about potential harms to individuals or to communities, marijuana isvery low on the list of recreational substances.

Despite this shift in thinking, arrests for marijuana possession continue unabated. Cops keep arresting people for marijuana possession. This might be a simple question of low-hanging fruit: Marijuana is by far the most widely used illegal drug, and more users means more potential arrestees. But these arrests have serious consequences for the people caught up in them, and they divert precious police time and resources away from more serious crimes, like rape and murder.

Beyond that, the Department of Justice has continued to aggressively prosecute marijuana cases even in places like California where some use of the plant is legal. This led to a federal judge giving a scathing rebuke to the department last month, accusing it of openly defying congressional efforts to put an end to these raids.

The DEA also continues to pump millions of dollars into its endless campaign to “eradicate” marijuana plants in the United States, funding expensive weeding operations that spend, in some cases, $60 or more to uproot a single plant.

The DEA’s latest drug threat assessment makes an implicit argument for smarter policing: If marijuana is of little concern while heroin and meth are a big worry, then devote less time and resources to the former and more to the latter. The report notes that over 46,000 people died from drug overdoses in 2013. What it doesn’t mention is that not a single one of those overdoses was caused by marijuana.

Source: Marijuana is literally the least of the nation’s drug worries, the police have announced – The Washington Post