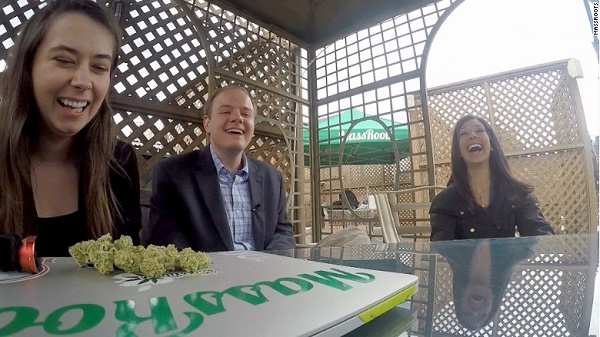 Some weed friendly workplaces in America are not only letting their employees consume marijuana in office, but are happy with the results too. This post from CNN Money highlights marijuana’s place in a regular work-day of these weed friendly offices.

At most offices in America, smoking a joint during your lunch break or eating cannabis-laced brownies at your desk would land you in HR.

But in some states, not only won’t you be punished — you might be rewarded.

Kyle Sherman and Chase Wiseman cofounded Flowhub, which provides software for the cannabis industry, in 2015. The Denver-based startup has been a weed-friendly workplace from day one.

“Our philosophy at Flowhub is to get s*** done,” said Sherman. “If it helps our employees get work done, then we don’t care if they consume at work.”

Sherman and Chase both consume marijuana at work, either in weekly brainstorming meetings or toward the end of the day.

“It definitely surfaces new ideas and a fresh take on things,” said Sherman.

While recreational marijuana is legal in Colorado, smoking of any kind isn’t allowed in the building. So Flowhub’s 18 employees, most of them millennials, are free to bring in cannabis-infused edibles, sodas and juices.

So far, there haven’t been any negative outcomes.

“Our clients are some of the biggest firms in the cannabis industry,” said Sherman. “We have to be on point with our work. We’ve never had a problem yet.”

High There! and MassRoots are just across the street from each other in downtown Denver.

Both are social networking platforms for cannabis users.

Both startups allow weed at work.

“Being in Denver, we’re in the heart of the cannabis industry,” said Darren Roberts, cofounder of High There! “Cannabis is part of our culture.”

Still, Roberts said it’s not like his employees are constantly stoned at work. Similar to Flowhub, he said consumption typically happens later in the day or at brainstorming sessions.

“It has led us to breakthrough moments for our business,” he said. “So yes, it’s been very effective for us.”

“I thought up MassRoots when I was smoking weed in my college friend’s apartment,” said Dietrich, whose firm has 30 employees and has raised $4.4 million in funding.

“Our general philosophy is that we need to be as productive and creative as possible, everyday,” he said. “If cannabis facilitates that, then we’re allowing it.”

While pot-oriented businesses tend to be more open about their consumption, not all companies are eager to talk about it. Many startups fear it could hurt their chances with potential investors. And in states like California, pot is still only legal for medical purposes.

Brandon David is a sales executive with a San Francisco-based software firm (he declined to name the company) that has hundreds of customers, including many in the cannabis industry.

“It’s very well known that most of the employees here consume cannabis regularly during the work day,” he said.

David said he uses a cannabis vaporizer daily at work for medical reasons.

“There are so many daily challenges in a startup environment, and you need to press ahead,” he said. Pot helps him stay focused by managing his stress and anxiety. “Sometimes I get a second wind and I’ll put in a few more hours.”

David said it’s an open secret that many more businesses are embracing the notion of consuming pot at work.

“There definitely are far more that allow it than are willing to openly talk about it,” he said.