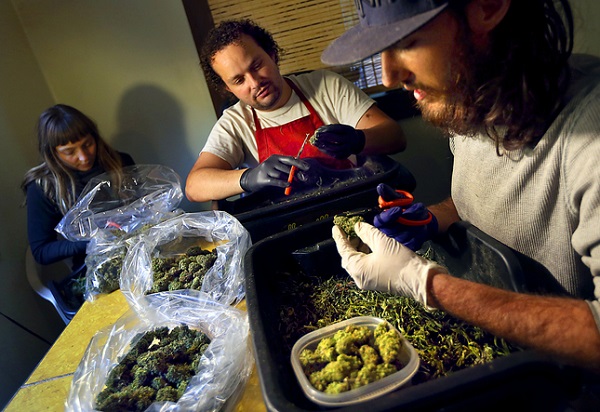 The annual march of migrants for marijuana jobs throughout California’s pot-rich North Coast is in full swing but reaction to the workers’ presence is mixed. This post from San Jose Mercury News turns the spot light on the annual phenomenon that occurs during the traditional fall cannabis harvest season.

Except for traffic passing through on Highway 101, this northern Mendocino County city is relatively quiet much of the year. But for three months in the fall, it gets an influx of world travelers lured by marijuana-trimming jobs, temporarily swelling the town’s population of under 5,000 and instilling it with an international flavor.

They’re called trimmigrants and they are an integral part of the North Coast’s lucrative marijuana industry, estimated to be worth billions of dollars and widely considered to be a major economic driver in Mendocino and Humboldt counties. But, like the pot industry itself, reaction to their presence is mixed. The migrant workers contribute to the economy, but many effectively are homeless. Though the growers who employ them typically provide housing or a place to camp, when not working, they camp illegally in parks, alleys and along railroad tracks and rivers. Some can’t find jobs and turn to panhandling and frequenting food banks.

The annual march of migrant marijuana workers has occurred for years throughout the pot-rich North Coast, from Sonoma County to the Oregon border and beyond during the traditional fall cannabis harvest season, which runs roughly from mid-September through the end of November. The phenomenon has gained a worldwide reputation, and now draws an international crowd to rural places that are not on the usual tourist guide list.

At a local pub on a recent evening, German, French, Italian and Spanish accents could be heard among the conversations as about two dozen foreigners gathered to meet up with fellow travelers or play music.

“It’s a melting pot,” said a man from Spain who gave his name only as Paolo. Like most of the foreign trimmigrants interviewed for this article, he said he’s working in the cannabis industry to earn enough to continue traveling the world. He also works as a freelance photographer and online graphic designer.

Most know before they arrive where to go to find work — typically outside supermarkets and natural food stores that potential employers are known to frequent in search of laborers. Those places include the Wal-Mart in Ukiah and Safeway in Willits.

They also know about local hangouts where they can find each other.

A man from Germany said he didn’t know two of his friends were even in the United States when he ran into them at the Schanachie Pub on Willits’ main drag, where customers are invited to mark their home countries on world maps already thickly covered in sticky dots.

The owner of the pub declined to be interviewed.

Trimming cannabis is tedious work — requiring hours of sitting and repetitive motion — but it’s not difficult to learn and it pays well.

Using special tiny scissors sold in hardware stores throughout the North Coast, trimmers earn anywhere from $100 to $200 per pound of finished product, snipping out the unwanted leaves from the resin-rich cannabis buds, which contain most of the plant’s medicinal and intoxication values.

“If you are really, really fast, you can trim two pounds a day,” maybe more, said Eric, 30, of Guatemala, as he stood outside the Willits Safeway with his backpack, sleeping bag and Argentinian traveling companion, Sol.

Like most others in the trimming business, they would not reveal their full names, an acknowledgment that marijuana laws remain murky, at best, rendering trimmers subject to possible arrest. Legitimate medicinal marijuana cooperatives aren’t supposed to pay employees, so most of the hired hands likely are working for people who also are growing marijuana illegally.

Ukiah attorney Bob Boyd over the years has defended a number of foreign trimmigrants snagged in law enforcement actions.

“They get their passports seized. I get a call from mom and dad back home,” he said.

Trimmigrants normally don’t want future employers or their families to know about their temporary jobs in the underground industry. Most of the foreigners also lack permits to legally work in the country.

The influx of foreign trimmigrants has exploded in the past few years.

“This trimmigrant thing has become huge,” said Tim Blake, founder of the Emerald Cup, the North Coast’s premier annual pot judging contest and festival, being held this year on Dec. 12 and 13 at the Sonoma County Fairgrounds. Blake also heads a Laytonville-based marijuana cooperative.

There are no hard or official statistics available on the number of marijuana processors working in the underground industry.

“These figures are almost impossible to assess due to the secretive nature of the cannabis industry,” said Jason Valentin, vice president of the Humboldt Medical Cannabis Union, a grass-roots organization whose stated goals include protecting the quality of life for medical cannabis workers in Humboldt County. He estimates the number of year-round marijuana workers in Humboldt County at between 7,000 and 12,000 and that, as a group, they earn between $150 million and $320 million annually, generating a significant impact on the economy.

Blake estimates it takes about 150,000 people to trim California’s annual pot crop, which he believes is worth around $15 billion, based on his knowledge of the industry and reports on its size. About half the trimmers are in Northern California, the state’s richest cannabis-growing region, and at least half of those are from outside of the United States, Blake said.

He figures they each spend $1,000 while they’re in Northern California, adding up to about a $7 million contribution to the local economy, he said.

Blake said he doesn’t hire trimmers — members of his co-op work in exchange for their medical marijuana — but he hosts music events that are widely attended by trimmigrants at his Area 101 events venue north of Laytonville.

He’s noticed a change in the trim workers in the last few years. They previously tended to be local residents and people who followed the music festival circuit, then stayed on the North Coast at the end of the festival season to process pot.

The newcomers tend to be educated, hard workers who also cook and clean. Some marijuana farmers prefer them over locals, some of whom act as though they’re entitled to high pay and free meals, Blake said.

“They wanted to be fed and treated like they were royalty,” he said. The attitude has prompted some growers to switch to mechanical harvesting, but it’s not as effective as hand trimming, Blake said.

When the foreigners showed up, they quickly became popular among growers.

But he doesn’t expect their jobs to survive new marijuana regulations aimed at taxing and regulating cannabis.

“Most of them probably don’t have work permits,” Blake said.

Valentin said he’d like to see a local, stable, above-board workforce that earns decent wages and benefits in a safe environment. Currently, it’s not always that way. Trimmers have been ripped off, sexually harassed and shot by employers, according to police reports and area residents. Some have disappeared. Growers also have been subject to robberies and other crime.

The surge of trimmigrants in general has some downsides.

There are too many of them now, creating a glut of workers in the cannabis industry. Some are believed to wind up on the streets, loitering, camping illegally and panhandling.

“There’s certainly a negative aspect to it,” Madrigal said of the trimmer migration.

Most of the vagrants spotted in recent weeks along the Highway 101 corridor in Mendocino and Humboldt counties did not appear to be foreign-born, but a few were.

Eugene, 28, who hails from France, said he worked as a cannabis trimmer for several prior seasons. He typically picks fruit in Canada before heading to California. But this year, he was unable to find trimming work and became stranded in Willits, dependent on its food kitchens and the kindness of strangers.

“I have to figure out how to get enough money to get gas to get back to Canada,” he said.

“I don’t encourage people to come here for that (trimming pot). There’s too many people,” Eugene said.

Cindy Savage, manager of Willits Daily Bread, said her organization each day feeds as many as 15 people she believes are trimmigrants.

Cannabis cultivators are choosy and now apparently prefer to hire young women, Eugene said. He said a Canadian woman he knows told him she was sexually harassed and was frightened of her employer.

Willits Police Chief Gerry Gonzalez said there are upticks in complaints about transients, illegal camping and illegal dumping in his city during the trimming season. But it’s nothing like the problems plaguing Garberville, in southern Humboldt County.

The problem people there may not be trimmigrants, but police and area residents believe they have been drawn by the perception of a permissive pot culture.

“I have been told ‘this is the land of buds and honey'” while confronting troublesome transients, said Beth Allen, 58, a Garberville restaurant owner and small-scale medicinal marijuana farmer.

Transients are everywhere in Garberville, a tiny town with fewer than 1,000 residents. Dozens have set up a tent city on a hill just outside of town, dubbed “Hippie Hill.”

The problem has given rise to a movement in Garberville to take back the town from vagrants and drug addicts who vandalize and burglarize homes and businesses, do hard drugs in public, urinate in the streets and harass tourists, who are now shunning the town.

“There is a bit of a community revolt,” said Humboldt County Sheriff’s Sgt. Jesse Taylor, who is based in Garberville.

Allen said she carries a Taser at all times because she’s been threatened and physically assaulted by vagrants, some apparently on drugs and acting crazy. Her store also has been vandalized, likely because she confronts people who act inappropriately in public. She’s also the spokeswoman for the group that has begun patrolling the town, offering assistance and advice to homeless people and attempting to get them to leave.

Willits is in good shape by comparison, but some residents are concerned and the city is split over trimmigration.

“There are people who do not like it at all. There obviously are others who don’t feel the same way,” said Lynn Kennelly, director of the Willits Chamber of Commerce.

Willits Mayor Bruce Burton is not a fan. He believes the trimmigrants are a negative for the community, potentially deterring the city’s efforts to attract doctors to its new hospital.

“I just don’t think it improves the curb appeal of the community,” Burton said.

He also doubts the trimmers are spending significant amounts of money in Willits.

But the side effects of the phenomenon also cost the city in social and police services, Madrigal said.

“I think it’s going to be a wash” economically, she said.