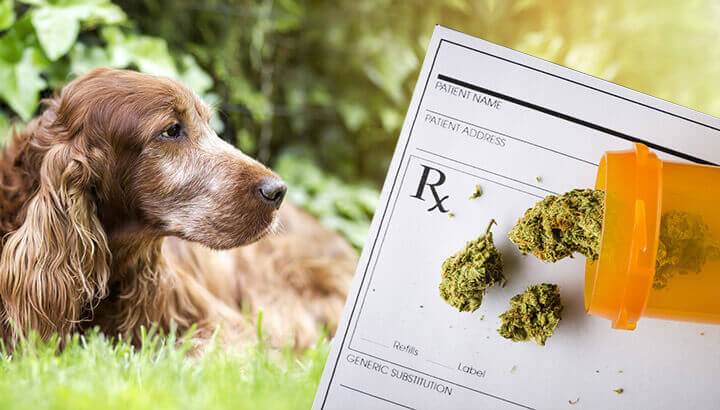 Medical marijuana is a controversial topic. But how do you feel about giving it to your pet for their health problems? Read on to find out more in this post from The Alternative Daily.

While much of the Western world is only just beginning to embrace the notion of medical marijuana for humans, there’s an even more controversial debate lurking right around the corner… has anyone thought about giving their pet a strong dose of pot?

Immediately, images of dogs with great big marijuana joints hanging out of their mouths jump into your mind. Or perhaps a cute little kitten taking a good long drag on a bong and going into a fit of cute kitten coughs. While it’s a slightly hilarious mental picture, it’s obviously not accurate — how the heck would you get them to inhale the smoke anyway? Smoke a joint yourself and blow it into their face?

But beyond the practical (and ethical) dilemma such a scene represents, there’s another reason why your pet isn’t going to be ingesting marijuana: it’s not marijuana that they’re ingesting! Not the kind that you became familiar with in your rebellious teenage years, anyway.

The difference between marijuana and hemp

Let’s get one thing straight: hemp and marijuana are, indeed, the same species. There’s actually a lot of misconceptions surrounding what exactly hemp is, with many people thinking they’re either completely separate species, or that hemp is the male variety of Cannabis sativa and marijuana the female.

The truth is, hemp and marijuana are simply different cultivars of the exact same species. While marijuana contains high levels of THC, the cannabinoid that creates that mind-altering “high,” hemp is required by law to have a THC concentration of 0.3 percent or less. Also, depending on the specific cultivar, hemp often contains higher levels of the therapeutic active compound cannabidiol (CBD), which is responsible for almost all of Cannabis sativa’s health-promoting effects.

For this reason, most of the cannabis products on the market aimed at pets are in fact hemp, as this still elicits the therapeutic effects on your pet but doesn’t get them staring vacantly at the TV or eating everything in sight. The exception, of course, is those products specifically formulated for treating pet anxiety. In this case, a strong dose of THC from good old marijuana is just the ticket.

Should you give your pet marijuana for arthritis?

The short answer is: maybe. There’s a growing body of evidence to confirm that medical marijuana (and indeed hemp) has a huge range of beneficial effects on the body and mind of us humans. You can take your pick of the therapeutic powers of marijuana: cancer treatment, pain-alleviating, reduction in multiple sclerosis symptoms, epilepsy treatment and of course as an antidepressant.

And while our physiology may differ considerably from that of our pets, there are enough similarities to confirm that many of these same therapeutic effects of marijuana can also be experienced by our animals. Unfortunately, because it’s an emerging field, there’s not as much scientific evidence as one would like. But, what studies have been completed show a lot of promise. And there are the thousands of anecdotal case studies from pet owners all over the world to consider.

But before we dive any deeper, it’s important to emphasize that every pet is different. As you well know, they come in all shapes and sizes, from tiny little birds to Great Danes or even horses. For each species and indeed each breed, the dosage is always going to be different, meaning you should consult your vet before starting your problematic pet on a course of cannabis.

So, why should you give your pet marijuana to treat his or her health problems? Let’s find out.

Many holistic vets across the country are recommending medical marijuana for the treatment of arthritis in certain animals, including cats and dogs. They maintain that the potent anti-inflammatory compounds in marijuana and hemp, largely in the form of CBD, can provide significant relief from pain in arthritic pets and enable them to have fuller, more enjoyable lives.

And there’s plenty of research out there, admittedly mostly conducted on rats and mice, that supports these veterinary claims. A study published in 2000 in the journal PNAS used a concentrated form of CBD (which you’ll recall is found in high concentrations in hemp, and to a lesser extent marijuana) to treat two different forms of arthritis in mice. They found that “in both models of arthritis, the treatment effectively blocked progression of arthritis.”

Another study, this time published in 2004, examined the therapeutic effect that CBD exhibited on rats that had been injected with inflammation-causing and arthritis-inducing carrageenan. Researchers concluded that the CBD had significant beneficial effects on many different markers of both inflammation and arthritis.

For this reason, using medical marijuana, hemp or a high-quality cannabidiol (CBD) treatment can provide good levels of relief for your pet, especially cats, dogs and (apparently) rats and mice. Combining CBD treatment with other holistic treatments, like massage, acupuncture (yup, acupuncture for pets is a thing!) and fish oil, can increase your chance of success.

Inflammatory bowel disease is a surprisingly common affliction in pets, particularly cats. By reducing inflammation, it’s possible that the CBD in marijuana may help to alleviate symptoms of IBS. By soothing their gastrointestinal tract, the CBD will also allow them to regain a healthy weight and be more enthusiastic about eating. Perhaps a little too enthusiastic at times!

Just as it is in humans, anxiety is a very real problem in many pets. Our cat, Ollie, had all sorts of problems with anxiety, stemming from a very troubled “kittenhood” as an abandoned street cat. While we were able to soothe much of those anxieties away over years of TLC, he still suffered form serious bouts of anxiety from time to time, particularly when lightning storms rolled in across the lake. The last time this happened, he actually suffered from a complete urinary tract blockage, and we spent many hundreds of dollars and a harrowing week trying to bring him back from the brink with various drugs and anti-anxiety medications.

The CBD in medical marijuana has the ability to almost instantaneously foster feelings of tranquility and calm in pets, thereby helping them to overcome their anxiety. And while I don’t recommend regular use of marijuana to calm their frayed nerves, in scenarios like our beloved Ollie’s case, it may be a life-saving move.

Source: Should You Give Your Pet Medical Marijuana For Arthritis?