2017 saw some tough times, but there was plenty of good news to spread around, too. This post from Leafly shares the 10 most inspirational cannabis stories of the year gone by.

It would have been tough to top 2016—the year four states legalized adult-use cannabis—in terms of inspirational cannabis stories. But don’t poor-mouth 2017. Sure, we went through some tough times. Jeff Sessions had nary a good word to say about legalization. The California wildfires hit some in the cannabis industry especially hard. But there was plenty of good news to spread around, too.

Canada moved on its promise to legalize cannabis nationwide. Adult-use cannabis stores opened in Las Vegas. Orrin Hatch hopped on the medical cannabis bandwagon. It was hard to winnow the list to ten, and especially hard to choose between Jeff Sessions and Canadian legalization.

After many late-night debates among our editors, we finally reached consensus. In the end, what Canada did to push progress on national and global legalization will mean far more than what Jeff Sessions did not do to undermine it in the United States. Here are Leafly’s ten most important cannabis stories of 2017.

While Jeff Sessions and other federal officials in the US spat venom at state legalization, Canada’s prime minister, Parliament, and provincial governments all moved to end prohibition in 2018. Make no mistake: Legalization isn’t a theory in the True North, it’s really happening (and will open next summer). Provinces are crafting rules to regulate legal cannabis—and some, like Ontario, are actually going to open province-run cannabis stores. Meanwhile, leading Canadian LPs (licensed medical cannabis producers) expanded their global reach by exporting product to Germany, Croatia, New Zealand, Australia, Brazil, Chile, and Portugal.

Just this week, Mexico announced that it will allow infused medical cannabis products to be imported in 2018. Most likely source for those imports? Canada. (Of course, Canadian licensed producers famously cannotmanufacture edibles. Yet. But edibles are coming, and the Mexican market might speed up their introduction.) By embracing regulated legalization, Canada is sprinting ahead to become the clear leader in the global cannabis industry.

Long lines of happy customers turned out for the midnight opening of Nevada’s first adult-use retail stores on July 1. At Las Vegas stores like Essence, Reef, Jardin, Oasis, Acres, and The Apothecary, locals buzzed inside and outside the stores, celebrating the state’s newfound freedom. State Sen. Tick Segerblom, the political godfather of the state’s legalization movement, made the ceremonial first purchase at The Reef just after midnight. “When I was doing this back in the 60s, it didn’t look like this,” Segerblom said. “No seeds, no stems, no sticks. This is pure bud.”

We learned two things about US Attorney General Jeff Sessions in 2017: He really, really hates cannabis. And he isn’t quite sure what he can do about it. 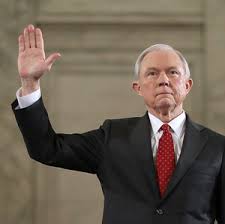 So he spent most of the year making snarky comments about state legalization, sending threatening letters to governors of legal states, and pressing members of Congress to end the Rohrabacher–Blumenauer medical marijuana protections.

It got so bad that former US Attorney General Eric Holder commented on Sessions’s “almost obsession” with cannabis, noting that it’s put the Justice Department in a “strange place,” with Sessions decrying legalization while the DOJ maintains its Cole memo policy that allows states to police legal regulation. By year’s end, the Cole memo remained in place and the DEA had not initiated any crackdown on legal states. Let’s hope the all-bark-no-bite policy continues in 2018.

This didn’t get a lot of play in the United States, but the opening of Germany’smedical cannabis market had a profound effect on the global industry and legalization movement. This is a nation of 82 million people—twice the size of California—with legislation that requires health insurers to cover medical cannabis used with a doctor’s prescription. That’s a profoundly important step, and one that’s likely to set a precedent for other EU nations to follow.

Mexico’s MMJ legalization happened with so little warning that it caught many by surprise. On June 19, 2017, Mexican President Enrique Peña Nieto legalized medical cannabis by decree, with overwhelming support from the nation’s lower house of Congress. In 2015, Mexico’s Supreme Court issued a ruling that legalized the use of medical cannabis for four plaintiffs in a specific case—but the ruling clearly had implications for the country as a whole. Peña Nieto, who had previously opposed cannabis legalization, followed up with word and deed. In April, he told the United Nations that “we must move beyond prohibition to effective prevention,” and in June he acted to do just that.

First movers have certain advantages, but second movers don’t have to repeat their mistakes. That may be the lesson here. After voters legalized in November 2012, Colorado and Washington crafted strict and imperfect regulations. Some rules worked, others didn’t. California and Massachusetts seemed to learn from those experiences, working with industry stakeholders to craft commonsense regulations (though not without some controversy). California’s massive retail market expects to open Jan. 1, with Massachusetts following in the summer of 2018.

A year ago, most mainstream leaders scoffed at the idea that cannabis could play a critical healing role in America’s opioid crisis. By the end of 2017, those same people were taking the idea very seriously. This year we saw more medical studies pointing to the role cannabis can play in helping chronic pain patients avoid opioids, limit their use, and/or ease the path out of addiction. Other research indicated that states with legal medical cannabis experienced lower opioid-related overdose deaths. And some recovery centers are now using cannabis as part of their wellness program.

The first two states legalized the adult use of cannabis in November 2012. Five years later, the grand experiment looks like an overwhelming success. Teen use in Colorado and Washington has fallen. Arrests are radically down—by 95% and 98%, respectively. Traffic fatalities did not increase. Violent crime didn’t rise. Opioid-related deaths declined. Cannabis tax revenue ($185 million in Washington in 2016 alone) has funded school construction, drug abuse education and prevention, and even sent some students to college. Meanwhile, the legal industry continues to grow and, at last count, supported more than 149,000 jobs nationwide.

Despite the data coming from Colorado and Washington, officials in the Trump Administration continue to hammer the successful programs. Earlier this year, Attorney General Jeff Sessions wrote a letter to congressional leaders, urging them to end the Rohrabacher–Blumenauer amendment, a budget measure that prevents Justice Department agencies and officials from interfering with legal state medical cannabis programs.

At year’s end those MMJ protections were still in place, but it’s uncertain how long they’ll continue. Congress currently has two versions of a 2018 federal budget—one that includes Rohrabacher–Blumenauer and one that doesn’t. A conference committee in early January will hammer out the details and decide whether it lives or dies.

An issue that started in Denver in 2016—with near-weekly product recalls—spread to other legal states in 2017. As Chris Roberts chronicled for Leafly in February, this marked the year that California’s growers and dispensaries faced a reckoning with cannabis contaminated with mold, mildew, and banned pesticides. One-quarter of the entries in the December 2016 Emerald Cup—the gold standard competition for Golden State growers—were disqualified for containing traces of banned chemicals. Steep Hill Lab reported that 84% of cannabis tested in a 30-day period turned up residual pesticides. Meanwhile, the state’s tough new medical cannabis testing regulations are scheduled to activate in early 2018. Is the state’s crop clean enough to pass muster? Stay tuned.

10. Conservatives Join the Cannabis Cause

2017 was the year that cannabis became a conservative cause. Or at least an issue that more conservatives came to embrace. Incoming members of Congress like Rep. Tom Garrett (R-VA) didn’t just mumble a few words in favor of legalization. They crafted bills to get the federal government out of the prohibition business.

Perhaps the biggest surprise: On a Wednesday in September, Utah’s senior senator, Orrin Hatch, rose on the Senate floor and gave an impassioned speech defending the rights of medical patients to use cannabis. Orrin Hatch. Utah. It was a surreal sight indeed, and many of us wouldn’t have believed it if we didn’t see it, via the Senate’s video feed, with our own eyes. Adding to the strangeness of the moment: Hatch’s obvious use of “pot” and “weed” puns in the text of his address. Weird, man, just weird. But hey—we’ll take the support just about anywhere we can get it. Welcome aboard, Sen. Hatch! There’s plenty of room for your colleagues; spread the word.