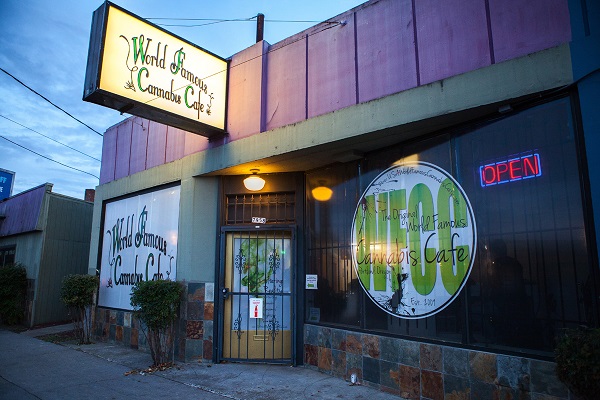 Starting January 1st, a new Oregon law will ban all marijuana lounges statewide. This has garnered a mixed reaction from the public. This post from KTVZ.com relates the reactions this news has generated among the public so far.

As of Jan. 1. the World Famous Cannabis Cafe in Portland is being forced to close, as state lawmakers have broadened the state’s clean indoor air regulations to include marijuana.

Within House Bill 2546, lawmakers defined what they mean by “inhalant.”

By law an Inhalant means:  “Nicotine, a cannabinoid or any other substance that’s inhaled into a person’s respiratory system.”

With this new law, marijuana lounges, of which only a handful exist, are not allowed in the state of Oregon.

“Cannabis cafes are absolutely illegal in Bend,” Chudowsky said. ” If somebody tired to open one here, it would not only be contrary to the codes that we just passed, but also to state law.”

So any type of place that’s open to the public were people can go and smoke or use cannabis is absolutely forbidden.

But many Bendites thought: If it’s not hurting others, than why not?

Madeline Martinez is a former correctional officer for the state of California. Now she’s a marijuana supporter, who worked with state lawmakers who helped create Measure 91. She enjoys helping people of all walks of life with their marijuana needs.

“My dream was to have a place of our own and consume cannabis out of public eye. And that’s really how it started,” Martinez said.

“I really didn’t add ‘medical’ to the name because I had a vision. I wanted to keep my eye on the prize, the gold ring of legalization.”

Martinez said it’s been a place for their community to come together.

“People like coming here, because they have felt like lepers in their own society for so many years,” she said. “We can’t consume anywhere, we can’t go to a theater. Why can’t we smoke a joint while we watch a movie?”

Mary Clendenin wrote: “ABSOLUTELY…total ban on that. Would I like to see one in Central Oregon? NO WAY!”

Jim Brow wrote: “I’m glad they banned it. Just because we have bars we should have pot dens too? Two wrongs don’t make a right. Hey, maybe we should have opium dens too!”

Martinez stressed she agrees no child should use marijuana, but believes there are numerous positives of cannabis.

“No one has ever, ever died of a lethal dose of marijuana — ever. I have that much on my side.”