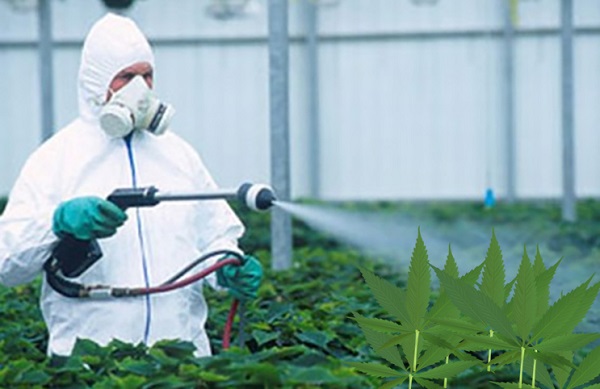 Pesticide contaminated marijuana products in Denver have been labelled a public safety hazard. They’ll be removed from commerce and destroyed. This post from The Cannabist sheds light on recalling of the tainted marijuana products and how the Governor’s orders for their destruction will be carried out.

Thousands of marijuana-infused products, recently recalled in Denver over concerns they contain unapproved pesticides, will likely be destroyed in light of the governor’s order to label them a public safety hazard.

Gov. John Hickenlooper on Thursday issued an executive order to quarantine and destroy any marijuana or its derivative products that contain pesticides not approved for use on cannabis. It could have a profound — and expensive — impact on the billion-dollar industry.

The immediacy of Hickenlooper’s order, jointly announced by the three state agencies that regulate marijuana, pesticides and public health, ensures that products already subject to recall will be destroyed, Denver and state officials said.

“The facilities with products currently subject to recall are already planning to destroy those products,” said Danica Lee, Denver’s food safety section manager in the public health inspections division. “(Hickenlooper’s order) reinforces the importance of protecting consumers from potentially dangerous pesticides. It is unclear at this point what impact this order will have on Denver’s investigations. We’re still evaluating it.”

One of the largest marijuana businesses in the state welcomed the order.

“We believe this brings much-needed clarification to the industry,” said John Lord, owner of LivWell. “We recognized there was a lack of standards in place in the past.”

“For all intents and purposes, these businesses broke the law, and there was no enforcement,” said Larisa Bolivar of the Cannabis Consumers Coalition, referring to companies with recalled marijuana products. “Their plants were put on hold; some businesses voluntarily destroyed their plants. But the fact remains that they used pesticides that weren’t approved by the state.”

Representatives of the Marijuana Industry Group and the Colorado Cannabis Chamber of Commerce said the trade organizations are each evaluating the impact and scope of the order and would not issue statements.

Precisely how the governor’s order will be carried out remains unclear, as various state and local agencies work out the most likely procedures.

“It was a long negotiation between the three departments, and there was some confusion and complexity in their authorities,” said Andrew Freedman, Hickenlooper’s director of marijuana policy. “There was no foot-dragging. It’s simply been a complicated issue.”

Currently, no lab is certified for pesticide testing, and although state law requires marijuana growers to test for the chemicals, that rule has not been enforced. The agriculture department tests marijuana in its own laboratories and could use its facilities for enforcing Hickenlooper’s order.

None of the three agencies had the authority to destroy marijuana laced with pesticides unless the plant was deemed a threat to public safety and health. By making his declaration, Hickenlooper opened the door for immediate enforcement, Freedman said.

The order allows the state to define as a public safety risk all marijuana products containing any measurable level of pesticides banned by the state for use on pot.

“Without the science to know one way or the other what specifically is a public safety risk, it has to be all of it,” Freedman said. “It either had to be all-in or not all-in.”

It appears each agency will have a piece in the enforcement, with agriculture officials catching pesticide misuse, public health officials declaring a public safety risk and MED officials urging businesses to voluntarily recall and destroy the affected products.

Minus a business owner’s cooperation, Hickenlooper directed MED to take whatever administrative action necessary to get tainted pot out of commerce.

Pesticides and how they can be used are regulated by the U.S. Environmental Protection Agency. Because marijuana is illegal under federal law, no pesticide can be specifically approved for use on cannabis, and there is no science about how safe it is for human consumption.

Although state agencies had batted around regulations regarding pesticide use on pot,none was enforced with any regularity. That changed in March, when Denver public health officials quarantined more than 100,000 plants — the equivalent of $100 million in potential revenue, according to industry estimates — that were treated with pesticides not approved by the state for use on cannabis.

Some of the plants were destroyed, but most were held until pesticide residues subsided to levels lower than what’s allowed on other edible crops.

Denver officials supervised another half-dozen recalls voluntarily issued by marijuana businesses, including edible products that were infused with cannabis grown with unapproved pesticides following Denver Post stories about its own tests. Many of those products remain under administrative hold until tests show pesticide residue levels are low.

Despite Denver’s enforcement actions, other areas of the state had little or no oversight program in place. That prompted Hickenlooper officials to set the tone.

“The local public health agencies were looking for some guidance, and there was some confusion as to whose domain the pesticides go under,” said Larry Wolk, director of the state health department.

“We’re not willing to let people get sick before we take action,” Wolk said of the new statewide edict.

Health officials in Pueblo, Colorado Springs and Boulder — the cities with the largest concentrations of marijuana cultivation licensees outside of Denver — said they did not deal with pesticide issues.

Bolivar, of the Cannabis Consumers Coalition, said she worries that violations will continue.

“The cynical side of me assumes there are more businesses still using unapproved pesticides, especially because the marijuana brands that were using these potentially dangerous pesticides are trusted brands,” she said.

It might take time for the industry to get the message, according to Sean McAllister, an attorney who represents a number of marijuana businesses.

“I’m very optimistic that in the next few months all the operators will have gotten the message and stop using things that aren’t specifically approved,” he said. “But in the short term, there are people out there that assume that no one’s watching and they can get away with doing this still.”