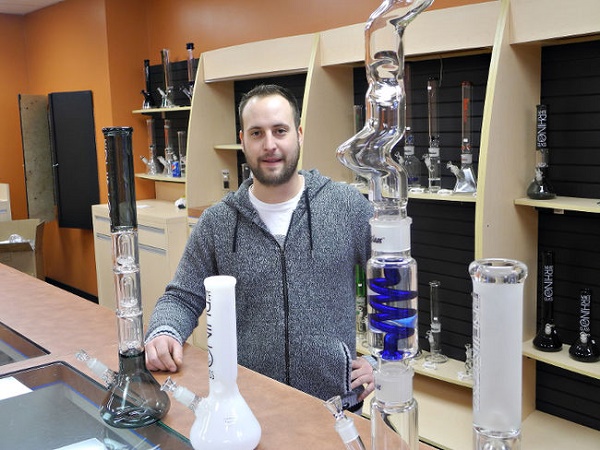 A specialty retail store, selling supplies for medical marijuana users, hopes to expand into the sale of medical marijuana. This post from Brantford Expositor turns the spot light on The Cannabis Supply Company.

The Cannabis Supply Company which will open its doors Saturday is just the beginning for owners Josh Millar and Steve Tota.

The Brant County residents, who live in the Burford area, near Norwich, already are looking to expand the Brantford business, which will sell supplies needed by medical marijuana consumers at its location in Unit 5B of a plaza at 164 Colborne St. W. The store will open at 10 a.m.

Millar couldn’t say when the store will be able to sell medical marijuana because doing so requires approval from Health Canada. Potential producers and sellers of medical marijuana must undergo a lengthy screening process, which includes a heavy emphasis on security, he said.

Security measures are already in place. Bongs, or water pipes used to ingest marijuana, are located on shelves behind a sales counter, with restricted access.

Millar said he believes there is already a large market for medical marijuana and supplies.

Manager Jake Langs said he hopes people will come by to see what the store has to offer and learn about the benefits of medical marijuana.

“It can help people who are in a lot of pain because they have cancer. And if they’re on chemotherapy it can help improve their appetite.”

In addition to various styles of bongs, the store, which occupies about 140 square metres, also sells pipes and vaporizers.

Brantford resident Brit Mitchell, an assistant editor of Cannabis Culture magazine, said she is looking forward to the store opening.

“I’m really excited to see what they have to offer.”

She said there are a lot of medical marijuana users in Brantford.

“It’s becoming a more preferred option as it is not full of the chemicals we are exposed to in traditional medicine.”

There are different ways of consuming medical marijuana and using a bong to smoke it works better for some people, Mitchell said.

“Each method of cannabis use activates compounds in different ways,” she said.

“Bongs are a great option because they hold water and can take the dryness away from smoking, making it easier to take in.”

Mitchell said she is not surprised that some of the bongs being sold at the store are worth $600.

Bongs are considered by many as works of art, taking a great deal of time and effort to create, she said, noting that type of materials used can also contribute to the cost.

The Cannabis Supply Company is regarded as a speciality retail store and is required to meet zoning bylaws, as well as building and fire code regulations, said Maria Visocchi, the city’s manager of corporate communications.

She noted that sale of medical marijuana is regulated federally and the provincial government plays a role in terms of business registrations for sales tax purposes.

“We do not believe a municipal business licence from the city is required for this retailer at this time,” she said.