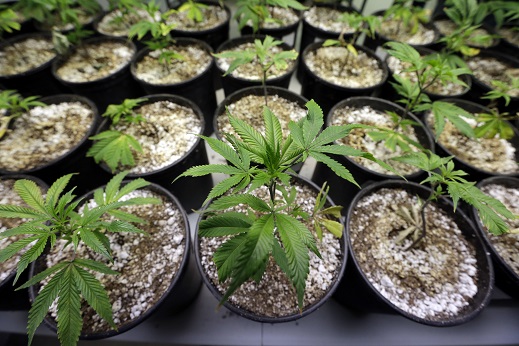 In this post from Politico, Darren Samuelsohn discusses how some of the nation’s toughest law-and-order senators just might be softening their stance on medical marijuana research.

As progressives celebrate a couple of big wins in Washington –  the Supreme Court upholding the Affordable Care Act and legalizing same-sex marriage – another issue has remained firmly stuck at the national level: marijuana legalization. Congress has resolutely opposed the state-level movements toward legalizing marijuana, keeping it a Schedule I controlled substance on par with heroin, LSD and peyote.

But now some of the nation’s toughest law-and-order senators just might be opening the window to cannabis, at least a crack.

Sens. Chuck Grassley (R-Iowa), Orrin Hatch (R-Utah) and Dianne Feinstein (D-Calif.) have all begun speaking up about the need for more clinical research on the marijuana plant compound known as cannabidiol, or CBD. The three sit on the powerful Judiciary Committee, which has a key voice in setting the federal government’s firm stance on pot in all its different forms.

They sent a clear signal in a packed hearing room last week, when the senators took on the tricky issue of CBD, a compound derived from an illegal drug but which many scientists and public health officials believe could treat conditions including cancer, diabetes, chronic pain, and alcoholism. Some parents and doctors have already turned to CBD as an anti-seizure medicine for children who suffer from rare and extreme types of intractable epilepsy.

Grassley, the chairman of the powerful Judiciary panel, told the audience at a narcotics caucus meeting that it’s not an “inconsistent position” to embrace the beneficial components of the pot plant even while rejecting pretty much everything else about the drug, adding that doctors prescribe morphine but don’t recommend their patients go out and smoke opium or heroin.  Feinstein and Hatch also spoke about the potential benefits from CBD, and complained that current drug laws impede the parents of sick children from access to what appears to be a helpful medicine.

At the same time, the senators went through elaborate motions to explain they weren’t softening their stance against recreational pot.

“I have deep concern that [pot] does more harm than anything else,” Feinstein said in an interview. “But in terms of the medical aspects of it, it’s a totally different picture. It’s like any other plant. I’m sure there are other plants that if you ate you’d hallucinate or something. But if you can get the beneficial parts out, get them researched, be able to standardize it, regulate it, you may have something very good.”

The lawmakers’ comments, coming on the heels of two recent Obama administration moves to expand medical-marijuana research, marked another pointed moment in the country’s shifting views on drug policy. What was once an absolute red line in the “Just Say No” era is now a more porous border. Twenty-three states and Washington D.C. have legalized medical marijuana; Alaska, Colorado, Oregon, Washington state and the District of Columbia have also legalized recreational use, despite the clash with federal drug laws.

Congress, so far, has made no moves at all to relax recreational marijuana laws, and in Washington D.C. – where it effectively holds veto powers over the local government’s affairs – it prohibited the city from spending money to implement its voter initiative on recreational use. As a result, the nation’s capital considers marijuana legal but doesn’t have any sales and taxation system.

But there have been a few openings as well. The Obama administration has declined to enforce federal drug laws in states that have legalized recreational pot, and Congress last year also approved legislation telling the feds not to meddle with any state-approved medical marijuana programs. The special case of CBD, which does not get users high, might provide the biggest opening. “I understand the desire for caution. We’re Congress. We act slowly,” said Hatch, the Senate’s longest serving Republican and the current chairman of the Finance Committee. “But we must remember that these are people’s lives we’re dealing with. These are people for whom a five- or ten-year delay is not an inconvenience, but a potential death sentence.”

Utah, Hatch noted, was “certainly no redoubt of hippie liberalism,” but in March 2014 became the first of 15 states to legalize use of the CBD oil. Now, he’s pushing the Senate to pass a bipartisan bill that would remove CBD from the definition of marijuana under federal law, giving parents a green light to buy the medicine without the threat of DEA agents busting them.

One sticky issue on the cannabis front has been that its outlaw status makes it more difficult to carry out both government and privately funded research. While it’s technically legal to study the medical aspects of pot, researchers must go through a rigorous DEA and FDA approval process, and can only obtain their marijuana from the government’s sole authorized U.S. supplier, located at the University of Mississippi.

While Grassley rarely has praise for Team Obama, he applauded the Democratic administration for two moves it made in June on the medical-research front: the Department of Health and Human Services got rid of what it called a duplicative 16-year old paperwork review requirement for private researchers studying the drug; and separately, the Justice Department and HHS moved to study whether CBD should be classified on a less stringent level than the entire marijuana plant.

“This is a significant breakthrough and I commend these agencies for agreeing to take this step,” Grassley said.

The feds are in part playing catch-up with the black market, where parents using the oil extracts for their children say they’ve spent as much as $2,500 for a month’s supply. Feinstein said she hears complaints from constituents in California and around the country that they have bought CBD without labels, factory seals or clear dosage amounts.

“This is an untenable situation. It is not how medicine should work,” Feinstein said.

Her goal, she said, was “to get this process expanded, and get it legitimized and get it regulated. And I think those are the things we have to do and do as quickly as we can.”

The FDA last year gave a green light to fast-track a clinical trial using CBD; it is being run by GW Pharmaceuticals, a United Kingdom-based company that currently has about 420 children getting treatments under supervision from doctors. Going forward, the FDA said it has a system in place to handle other applications, should more private companies pursue it.

“It is absolutely reasonable to expect that marijuana would be able to be developed as a drug,” Douglas Throckmorton, FDA’s deputy director in its Center for Drug Evaluation and Research, testified during the Senate’s Caucus on International Narcotics Control hearing. He added that the FDA has previously approved two other drugs that are marijuana plant byproducts: In 1985, it permitted Cesamet and Marinol for chemotherapy patients dealing with nausea and vomiting; and the criteria for Marinol prescriptions in 1992 were expanded to AIDS patients who lose weight from anorexia.

Despite their interest, Feinstein and her colleagues were circumspect still about how far Congress will go this session. The House in June included several pot-related amendments to a spending bill funding the Commerce, Justice and State departments; one measure adopted on a 297-130 vote allows states that have legalized cannabidiol to do it without federal interference; another prohibits the federal government from blocking states from implementing their own medical marijuana laws. (President Barack Obama signed a similar provision into law in last year’s “CRominbus” spending bill, but the language lapses at the end of the fiscal year.) The House also narrowly rejected an amendment – on a 206-222 vote – that would have told the feds to butt out in the implementation of any state marijuana laws, either recreational or medical.

In the Senate, Cory Booker (D-N.J.), Kirsten Gillibrand (D-N.Y.) and Rand Paul (R-Ky.) are leading an effort for a broader medical marijuana bill that would help make the drug available for a range of conditions, including cancer, glaucoma and for children via the CBD extract. Their legislation would block the federal government from halting state medical marijuana laws; permit doctors at the Department of Veterans Affairs to prescribe the drug to military veterans; allow banks to do business with medical marijuana dispensaries and let states import the CBD oils for treatments. The senators also want to change how marijuana is classified under the Controlled Substances Act – moving it from the most restrictive Schedule 1 category that limits its use for research and defines it as having no accepted medical benefits into the Schedule 2 category that comes with fewer requirements before it can be studied.

In an interview, Gillibrand said it was a “huge deal” to have Grassley, Hatch and Feinstein supportive of expanding cannabis research. “I think it’s the first step toward a fuller conversation on how important medical marijuana is to so many patients across the country,” she said.

But Gillibrand still has work in front of her if she wans to pick up their support for many of the specifics in her bill. Grassley, who has been a high-profile partner with Gillibrand on legislation tackling sexual assault crimes in the military and on college campuses, said he wasn’t ready to ally with the Democrat yet on medical marijuana legislation. “There’s probably more chances for research and ways to do research that probably detract a little bit from the necessity for legislation, but that doesn’t preclude legislating,” he told POLITICO.

And when asked if she backed the push to reclassify marijuana as a Schedule 2 controlled substance, Feinstein – who represents a state that legalized medical marijuana nearly 20 years ago –replied: “I’m not there yet.”

via The Senate’s experiment with cannabis.