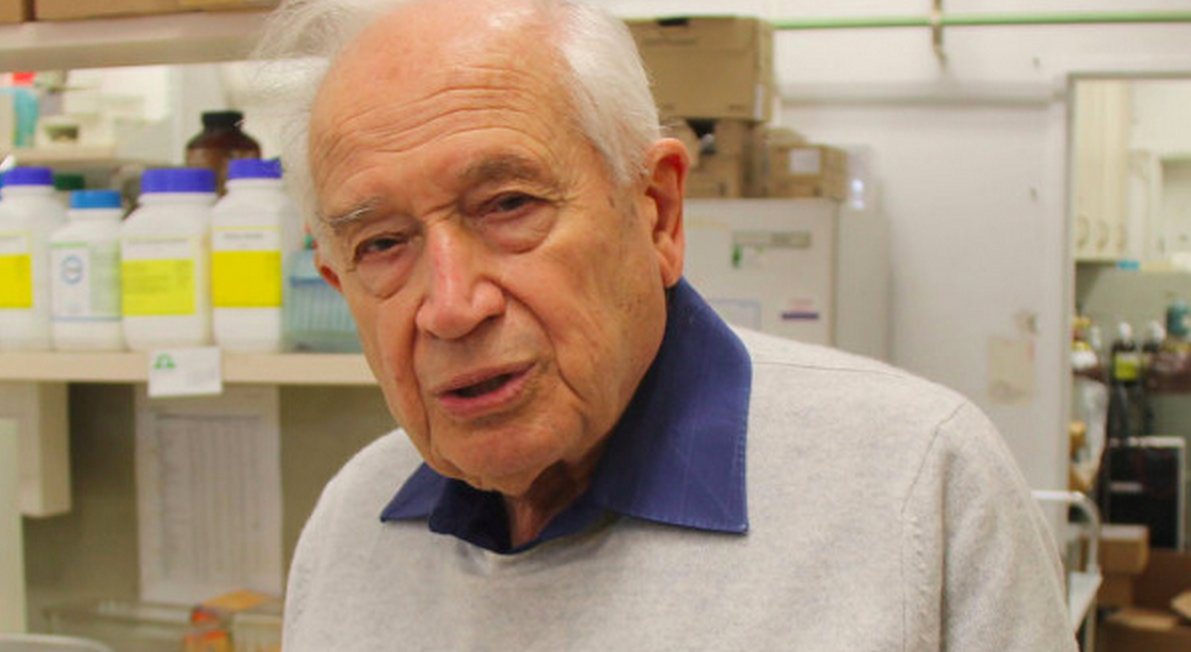 Meet the 84-year old Israeli scientist who discovered THC and is now known as the ‘Grandfather of Marijuana,’ but he’s against legalizing it! This post from ‘Patients for Medical Cannabis’ turns the spotlight on Professor Raphael Mechoulam who became the first scientist to isolate THC.

When Raphael Mechoulam first asked the National Institutes of Health (NIH) for a grant to research cannabis back in 1963, the top U.S. public health agency was quick to show him the door. “They told me, ‘Come back to us when you choose another subject—marijuana is not an American problem,’” the 84-year-old Israeli professor recalls.

More than half a century later—after becoming the first scientist to isolate THC, having a long, successful career dedicated to discovering cannabis and its effects on the body, and now being referred to in Israel as the “Grandfather of Marijuana”—professor Mechoulam still sounds a little proud when he mentions how fast the NIH changed its mind.

“One year after that initial rejection,” he says in an interview this week in his small office in the Hebrew University of Jerusalem, surrounded by framed awards, “I got a call from the same official. Turns out, a U.S. senator’s son was caught smoking marijuana. The senator asked the NIH what effect it would have on his brain, and they were embarrassed to have done no research on the matter. He called to see what our group has done so far.”

“By that time,” Mechoulam continues, “we were lucky enough to isolate THC [the psycho-active ingredient in cannabis], so I invited him over.”

The discovery itself, he says, owes a great deal to Israel being a small country where everyone knows one another and where the rules are somewhat flexible. “Our administrative manager knew a guy from his army time who became a senior police officer. He called him and asked if we could get some Lebanese hashish from the storage rooms. Long story short, I went to Tel Aviv, had coffee with the guy and drove back on the bus with 5 kilos of hashish.”

The American health official left Israel with all the pure THC from that batch, “and most of the THC research which was done in the U.S. during the following years was from those 5 kilos,” Mechoulam says, smiling. “In the U.S., I would have gone straight to prison.” Perhaps not anymore. As attitudes toward using cannabis change in the U.S. and around the world, there is renewed interest—and a new legitimacy—in developing drugs based on cannabis, and on the disease-fighting natural mechanism that the plant helped to uncover: the endocannabinoid system.

Mechoulam and his team have been there all along. After isolating THC and other cannabinoids in the plant (among them the non-psychoactive cannabidiol, which is the main hope in developing new drugs), fellow researchers discovered the brain receptors they activate. Then a team in Mechoulam’s lab began looking for the reason those receptors were even there. (“It’s not because the plant exists,” he says.) They found that the human body naturally synthesizes endocannabinoids, which affect appetite, mood, memory and more. But that’s where things got stuck.

Mechoulam explains it was due to various reasons. THC and cannabidiol are not patentable, meaning drug companies can’t make enough money from them to justify the investment it would take to turn them into approved drugs. Secondly, the fact that cannabis is still considered an illegal drug in many places deters companies from dealing with it. In addition, he says, government regulators did not push hard enough for clinical trials of cannabinoid-based medicine, also because of its illegality.

“A lot of time has been wasted,” he says. “Back in the ’80s, we did a small study on the effects of using cannabidiol-rich marijuana on adults who suffer from epilepsy,” he says, “and the results were great.” These days, doctors are testing doses of a few drops of oil under the tongue on children with very severe epilepsy. “The result are once again great, but it has been 35 years, for God’s sake,” he says, “so many families have suffered since then.”

Mechoulam opens his computer and shows a variety of early-stage research, mostly from small groups in Israeli hospitals, which exemplify the promising nature of cannabinoid-based therapies. Schizophrenia, graft-versus-host disease (GVHD), osteoporosis and a host of other diseases are mentioned. He says things are slowly changing. “The U.S. authorities now realize they have to promise exclusivity to some drug companies who develop a medicine based on cannabis; and some companies try to modify the natural materials so they can patent them.” This slow change, he says, takes place in tandem with U.S. legalization of marijuana. “There are two different worlds: the social or recreational use and the medicinal use,” Mechoulam says. “Though they are usually mixed together.”

Mechoulam is the hero of many legalization activists: “I get fan mail sometimes,” he says. Yet he has a complex view toward legalization. “I am definitely not happy with people going to jail for using weed, but if I had to vote yes or no, I would vote against it,” he says, citing the effects of THC, especially on young brains, as the reason.

The emeritus professor, who still operates an active lab with researchers from Israel and around the world, says he has never tried the stuff. “We did an experiment once, in the early days, where we sprinkled some THC on 10 slices of cake. Half of us got the THC slices, half got a placebo slice. In retrospect, we put too much. One subject started talking nonstop; my wife was just sitting on a couch, in her own world; another one suffered a psychotic episode and was being taken care psychiatrist; the other two were sleeping.” He adds, smiling, “Turns out, I was in the control group.”