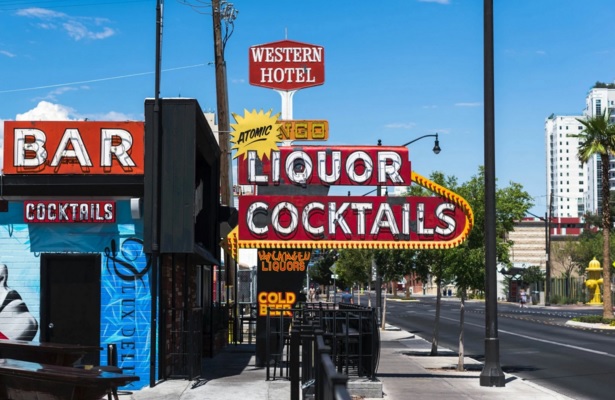 A new research establishes that the real gateway drug is not marijuana and that early alcohol consumption is a better predictor of future illicit drug use. This article from The Washington Post highlights the findings of this study.

You may have heard that marijuana is a gateway drug. Republican presidential candidate Chris Christie makes this argument seemingly everychance he gets. Anti-drug groups often make similar claims.

The evidence seems convincing enough at first blush: studies show that 99 percent of illicit drug users tried marijuana before they did any other drugs. But on its own, this line of thinking actually is pretty tenuous: we could also safely assume that 99 percent of illicit drug users also tried coffee, or soda, or chocolate milk before moving on to stronger substances.

New research out this month in the Journal of School Health could shed some light on this question. A team of researchers from Texas A&M and the University of Florida examined data from from 2,800 U.S. 12th graders interviewed for the Monitoring the Future study, an annual federal survey of teen drug use. They wanted to establish which substances teens typically used first.

They give away their findings in the title of their paper: “Prioritizing Alcohol Prevention: Establishing Alcohol as the Gateway Drug and Linking Age of First Drink With Illicit Drug Use.” They found that “the vast majority of respondents reported using alcohol prior to either tobacco or marijuana initiation.”

Not only that, but of those three main substances — alcohol, tobacco and marijuana — kids were the least likely to start using pot before the others. 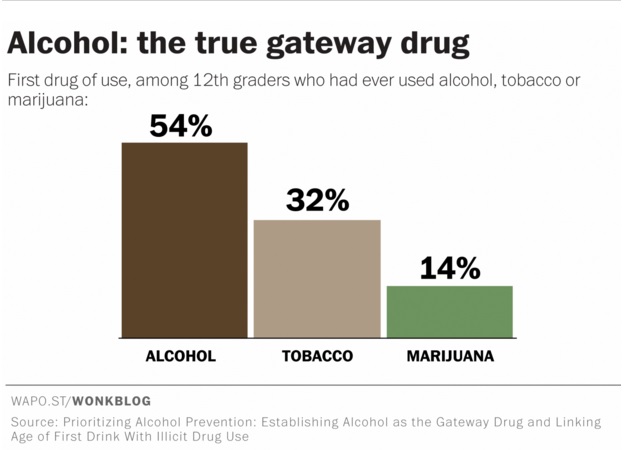 “Alcohol was the most widely used substance among respondents, initiated earliest, and also the first substance most commonly used in the progression of substance use,” the researchers concluded.

It’s not clear to what degree, if any, this reflects greater availability of alcohol. Researchers typically see marijuana as in the same general universe of availability as alcohol and tobacco, simply because use of those three are so widespread compared to other substances. In fact 12th graders now are more likely to use marijuana than tobacco, despite one being legal and the other not. Jonathan Caulkins of Carnegie Mellon University told me last month that perceived availability of marijuana, as measured in the Monitoring the Future studies, has been at a high level for 20 years.

But we’re still playing a game of “which drug came first” here. The researchers go on to argue that the question of which drugs kids start with is a lot less important than the question of how early they start using. “Overall, early onset substance initiation, whether that is alcohol, tobacco, or other drugs, exerts a powerful influence over future health risk behaviors,” they write.

For starters, they found that the earlier kids started using alcohol, the more likely they were to go on to try other drugs. Kids who had their first drink in 6th or 7th grade went on to try an average nearly two illicit substances later. By contrast, kids who waited until 12th grade to drink had only tried an average of 0.4 substances.

They also found that adolescents who drank at a young age went on to use illicit drugs more frequently than than those who waited. They didn’t examine marijuana or tobacco similarly, because the numbers of kids starting with those drugs were so relatively low.

To the extent that there is a gateway drug, then, it’s alcohol. But the notion of a “gateway” is less important, in this study, than the question of when kids take that first step on the path of substance use.

Keep in mind, though, that these questions were asked of 12th graders. People who started drinking in 12th grade didn’t have as much time before the survey was administered to try other substances. If you asked similar questions of people in their late 20s, for instance, you’d probably find that some of those late starters still went on to try other drugs in college.

In the past, Christie has argued that legalizing marijuana would lead to more teen drug use, and that taxes generated from marijuana sales amounted to “blood money.”

“I’m not going to put the lives of children and citizens at risk to put a little more money into the state coffers, at least not on my watch,” he said in March.

But if taxes on marijuana amount to “blood money,” Christie so far has had no qualms with accepting taxes on the sales of alcohol. In 2013, he signed a bill expanding the state’s production of hard liquor. The bill allows distillers to produce 640 gallons of hard spirits per year, provided they pay a $938 licensing fee.

Source: The real ‘gateway drug’ is 100% legal – The Washington Post