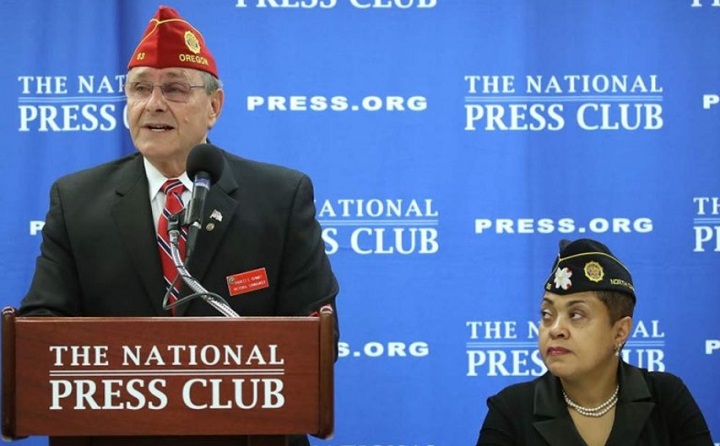 The appeal by the American Legion was included in a letter sent to the White House last month. The letter requests a meeting with Trump to discuss critical veterans’ issues including opiate addiction and suicide, and calls on the Trump administration to “clear the way for clinical research in the cutting edge areas of cannabinoid receptor research,” according to portions of the draft letter shared with The Cannabist.

“It’s time the federal government took action to remove barriers to scientific research on this very important subject,” said Joe Plenzler, American Legion Director of Media Relations, in an email to The Cannabist.

Under the Controlled Substances Act, cannabis is listed alongside heroin, LSD and ecstasy as a Schedule I substance — the strictest of classifications, defined as having a high potential for abuse and no “currently accepted medical use.”

The American Legion’s request is an attempt to extricate the federal government from a “policy Catch 22,” said Louis Celli, the organization’s national director of veterans affairs and rehabilitation.

“On one hand the government claims that there is no federally approved scientific evidence to support cannabis being used in a medical environment, so they refuse to consider reclassifying it,” he said via email. “And on the other hand they refuse to permit scientific research because it’s a Schedule 1 substance.”

American Legion officials stress that they are not advocating for marijuana legalization.

“Rather we are advocating for re-scheduling so that more research can be done,” said Plenzler. “That (research) will enable our elected leaders and the American people to have a national discussion on the matter based on scientific evidence.”

The American Legion has received feedback from many veterans who report access to medical cannabis has been “effective” in helping them cope with issues such as traumatic brain injury (TBI) and post-traumatic stress disorder (PTSD), Plenzler said. He called those afflictions “the signature wounds of the wars in Iraq and Afghanistan.”

The American Legion’s request that marijuana be reclassified doesn’t come as a complete surprise. At its national convention last August, the group passed a resolution urging the Drug Enforcement Administration (DEA) to license privately-funded U.S. medical marijuana production operations to enable “safe and efficient cannabis drug development research.” The resolution also calls on Congress “to remove marijuana from Schedule I and reclassify in a category that, at a minimum, will recognize cannabis as a drug with potential medical value.”

Last December, Legion officials met with then President-elect Trump’s transition team to lay out top priorities, including the reclassification of marijuana so that quantifiable medical research can be conducted.

In addition to the American Legion’s advocacy, there are efforts underway in Congress to allow veterans safe access to medical marijuana in states where it is legal. The Veterans Equal Access Act, introduced in the House of Representatives earlier this year by Rep. Earl Blumenauer, D-Oregon, would authorize Department of Veterans Affairs (VA) health care providers to give recommendations and opinions to veterans regarding participation in state marijuana programs.

The VA states on its website that while some states have approved the use of marijuana for medical and/or recreational use, the department is “required to follow all federal laws” regarding cannabis.

Veterans taking part in state medical marijuana programs should therefore be aware, the website states, that while they won’t be denied access to VA healthcare, the VA doctors and clinical staff will “record marijuana use in the Veterans VA medical record along with its impact on the Veterans treatment plan.”

Among the groups supporting the American Legion’s call to advance research on medical marijuana is the newly-formed Veterans Cannabis Project, a nonprofit organization educating veterans on the benefits of medical marijuana while also promoting cannabis industry career opportunities available to them.

“Medical marijuana is a political issue. It is a legal issue. But most important, it is a health issue that is playing an increasingly significant role in the quality of life for America’s veterans,” said Nick Etten, the group’s executive director and a former Navy Seal, in an email. “In their request to seek support from the president to clear the way for expanded clinical research of cannabis, the American Legion is once again demonstrating, as their membership consistently has for almost 100 years, the leadership required to ensure that neither partisan politics nor failed policy will impede safe and effective treatment options for those who have served us.”

Featured image: Charles Schmidt, National Commander of the American Legion, speaks to the media while flanked by Verna Jones, Executive Director of the American Legion in the District, during a news conference at the National Press Club on February 22, 2017 in Washington, DC. Schmidt spoke about critical veteran’s issues facing the new Trump administration and Congress. The Legion has now called on Trump to reschedule cannabis for medical research to assist veterans. (Mark Wilson, Getty Images)