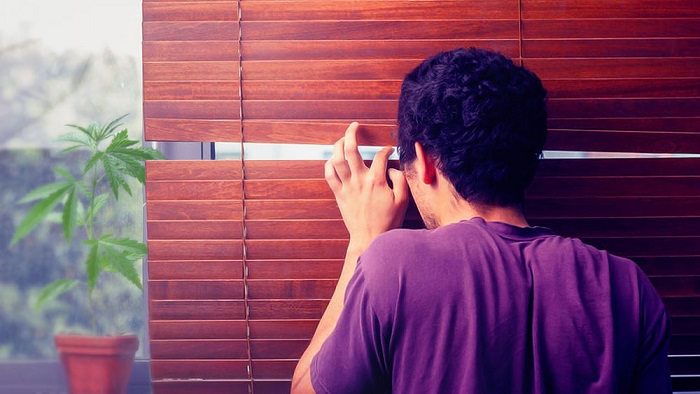 Marijuana paranoia is a condition caused by excessive use of high THC cannabis. This post from Green Camp has tips on how to reverse this effect and which are some of the best low paranoia strains.

Paranoia is one of the most common side effects of marijuana. Some users experience it regularly almost every time they use the herb, while others have never felt it.

It can be frustrating and discouraging. Some people avoid using cannabis altogether because they prefer not to experience marijuana paranoia anymore.

To be honest, marijuana induced paranoia can happen to anyone…

…especially when you get too high.

But it usually goes away as the effects of marijuana wear off.

On the other side, anxiety patients have been using marijuana as a medicine for quite some time now. While doing so, doctors and clinicians are being extra careful and tend to recommend their patients the specific strains which are likely not to induce paranoia.

If you have short-term paranoid episodes when you are high, you don’t need to quit smoking marijuana all the way.

Using cannabis as both medicine and recreational drug can be wonderful, and I’ll try to teach you how to avoid annoying paranoia episodes and even better — I’ll give you some tricks to quickly reduce it if it happens.

So, let’s see why marijuana makes some people paranoid and others not.

Paranoia is a thinking process influenced by intense fear and anxious feelings. It’s characterized by feeling like being under constant threat.

When having paranoid thoughts people are usually overwhelmed with thinking about conspiracies against them.

For example, while most people would think of one incident to be a coincidence, person with paranoid thoughts would think of it as something planned and intentional.

These irrational thoughts and beliefs can get so fixated, it becomes very hard to convince that person otherwise.

For many people, it’s hard to tell the difference between symptoms and reality.

Some symptoms, though, are typical for the condition, such as mistrusting almost everyone, having difficulties to relax, constant vigilance and being unable to forgive.

Can Marijuana Cause Paranoia? 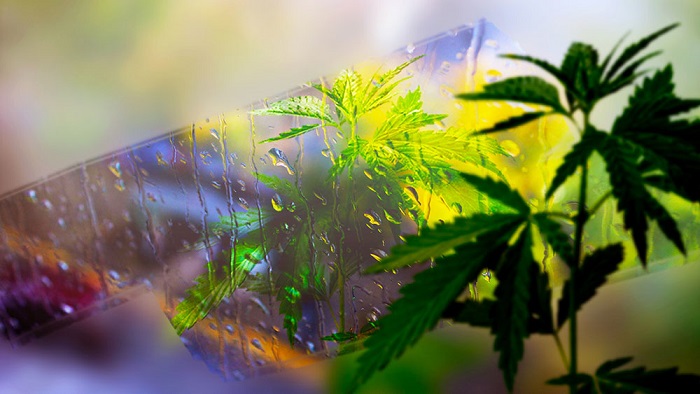 Anxiety sufferers have been using marijuana for decades, with reported noticeable improvements.

On the other hand, some marijuana users have been experiencing paranoia more or less often when using cannabis. Still, most of the recreational marijuana users are having a wonderful experience with the herb.

So, what’s the deal with this?

As it turns out, some marijuana strains can cause paranoid episodes. But that’s not the whole story. Whether you experience paranoid episodes or not, depends on your state of mind and well-being, as well as your psychological health, stress levels and everyday worries.

Once again, the endocannabinoid system in our body plays a role in causing (or not causing) marijuana paranoia.

Researchers from the University of Western Ontario found that rats exposed to THC reacted more to the smells they were trained to be scared of. Rats have similar processes and reactions to fear as humans do, but still, the results of this study could not be taken for granted.

However, the study didn’t conclude why some people feel more paranoid than others, as well why some don’t feel paranoid at all.

Professor Freeman and his team from Oxford University tried to provide an answer to that enigma.

121 participants from 21 to 50 years of age who had used marijuana at least once in their life and had not had any mental issues, were given either THC or placebo.

The results were following:

50% of those who used THC and 30% of placebo users reported having paranoid episodes.

Although marijuana did produce short-term paranoia in some users, researchers concluded that we were more likely to experience that kind of episodes when we are worried or have mistrustful thoughts.

If you are experiencing paranoia when you are high, think of it as an opportunity to learn something about yourself. Think about your feelings and what triggers your paranoia.

This could be the opportunity to resolve your problems and relieve yourself from stress before you start enjoying marijuana without paranoia.

The best precaution is to be happy and uplifted even before you use cannabis.

How to Get Rid of Paranoia When You’re High?

As I said before, “high paranoia” can happen to everyone, there’s no exception. But, not every marijuana experience causes paranoid episodes.

Feeling paranoid from marijuana can occur after taking too much of it… Although sometimes we do feel more or less paranoid, most of us continue smoking weed.

Anyway, even if you smoke so much weed that you think you’re going to die, don’t worry, you won’t. It will go away.

Here are some simple tricks to keep in your sleeve if you want to get rid of paranoia when high.

When marijuana kicks in and you start feeling paranoid, it’s not the best feeling in the world. If you want to get rid of it, it’s important to stay calm. Lay down and close your eyes, try counting if that’s what relaxes you. Take deep breaths and exhale slowly. And remember that it will wear off eventually.

While you are laying down in your bed trying to relax, play some smooth music to help you overcome your marijuana paranoia. Play your favorite song on your phone, it can help.

Lemons have been used for sobering up from alcohol and it looks like this fruit can also help you when too high. So when marijuana makes you paranoid, make lemonade… with pepper. Yes, both lemons and pepper have terpenes which diminish the psychoactive effects of THC and paranoia.

Take one big glass, squeeze one fresh lemon, add a pinch of pepper and lemon zest, some ice and a little bit of fresh mint if you like, and pure club soda. Drink it slowly and you’ll feel paranoia wearing off right away.

Nicely warm or icy cold… Find the right temperature which feels the most pleasant for you. Although you might be lazy to take one but believe me, you’ll feel a hundred times better after taking a nice shower.

If you are feeling too high and paranoid, take a nice long walk outside. Some fresh air could be just the thing you need. Also, when outside feeling the breeze you’ll feel much better and relaxed. Take a few deep breaths of fresh air. Don’t worry, it will all go away.

Help your body to recover from marijuana paranoia by having a nice healthy snack. Eat something that you really enjoy. You should also try some fresh fruits, cereals with some honey or a nice warm broth. Also, if you get paranoid from smoking marijuana, try to remember to stay hydrated all the time.

As I’ve said before, it all depends on your overall health as well how much you smoke marijuana and which strains.

There are strains that usually don’t cause paranoia, while there are a few that apparently do.

If you would prefer to avoid getting paranoid when high, try some of the strains from the list below.

On this list, you’ll find the strains for beginners as well as experienced users, with high THC or CBD content.

In general, CBD is a non psychoactive chemical in marijuana which diminishes THC’s effects, one of which is that paranoid feeling.

Well balanced strain with CBD probably will not trigger paranoia but a nice head high.

Here are some strains to start your paranoia free marijuana experience.

If you would like a paranoid-free experience, this is one of the best strains for you, as it is a completely non psychoactive strain. This Sativa-dominant strain is one of the favorites among the patients looking for a relieve stress, nausea, pain (even from cancer).

This Sativa-dominant strain with high CBD and low THC content could be the strain you are looking for if you don’t like feeling paranoid. After using this strain you’ll be focused but relaxed and ready for your daily routine. FYI, Harle-Tsu is also a great painkiller.

Stephen Hawking Kush is a great strain to get high without experiencing paranoia. In fact, CBD cannabinoid diminishes the effect of THC which is associated with paranoia, anxiety, and psychoactivity. It’s an incredible strain for calming down and suppressing nausea.

If you are looking for a strain for a good cerebral high, this is the one. Gelato is a hybrid and a very potent one, so it’s not recommended for beginners. However, if you are an experienced marijuana user, you’ll enjoy the relaxation Gelato provides with mental clarity.

Great strain for those who like to avoid paranoia and anxiety caused by marijuana. Flo provides clear mind, leaving you to feel light but energized. Experienced users like to consume it in the morning for a fresh start of the day.

This strain is great if you are suffering from some kind of anxiety. Strawberry Dream will make you chatty and outgoing, feeling comfortable to talk to people without feeling paranoid. It’s recommended for beginners and people who don’t use marijuana regularly since-since the effects come and go slowly.

This is also one of the more potent strains, so if you are not experienced in cannabis take it easy and slowly. Key Lime Pie is used in treating PTSD and anxiety disorders since it does not cause the paranoia side effect.

This is a Sativa-dominant hybrid but very rich in THC, making it perfect for experienced stoners who don’t like to get paranoid. It’s recommended for nighttime use or on the days when you don’t have to get things done. Quantum Kush increases appetite, suppresses nausea and it’s a great stress reliever, too.

Another strain for more experienced users, Golden Ticket provides the full 420 experience but without paranoia. When it’s high THC content kicks in, you’ll feel some kind of a mind rush and a boost of energy and creativity. When the effects start to wear off, it provides calming feeling with a mild couch lock effect.

RHS is a very popular medical strain and has been used as an antipsychotic, since it does not make users paranoid or anxious. However, it does provide both cerebral and body high as well as a boost in focus and creativity.

Try experimenting with strains until you find the one that’s best for you. And remember, sometimes it just takes a little effort to find a good workaround.

Source: What Causes Marijuana Paranoia and How to Overcome It?