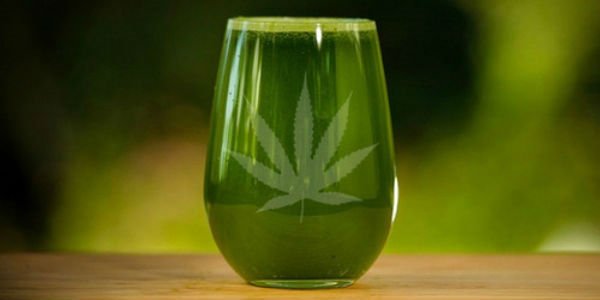 In this post from Body, Mind, Soul & Spirit, Elizabeth Renter unveils the latest method of reaping the benefits of marijuana–juicing. Raw cannabis juice could enhance many of the benefits associated with smoking, vaporizing, or eating cannabis.

More and more we are beginning to understand that marijuana is far more than a street-level ‘drug’. In fact, research shows that it’s a healing plant — and it doesn’t have to get you high. And as we learn more about this healing plant, we learn there are really a multitude of uses and methods to obtaining its benefits.

One of the latest methods of reaping its benefits is juicing, as one woman learned the hard way.

Juicing is a great way to get the best stuff out of plant materials. It makes digestion easy and allows your body to really make the most of what you put into it. So, it stands to reason that many of the benefits associated with smoking, vaporizing, or eating cannabis could be enhanced through juicing.

High-aside, some argue juicing raw cannabis to be the most beneficial, and it does all of this without getting users stoned. Raw cannabis is not psychoactive. The beneficial compounds within are known as cannabidiols (CBD) and they are not the THC responsible for getting you high.

Instead, as NaturalNews reports, CBDs “bridge the gap of neurotransmission in the central nervous system, including in the brain by providing a two-way system of communication that completes a positive ‘feedback loop’”.

Dr. William Courtney, founder of Cannabis International, is largely considered the biggest proponent of raw cannabis juicing. His patient (and wife) has also become a visible advocate after a video featuring her testimony went viral.

Also a researcher, Kristen Peskuski was diagnosed with rheumatoid arthritis at age 16. She also had systemic lupus, endometriosis, and a host of other conditions. In her video, she details how raw cannabis helped her get rid of a prescription drug regimen that included 40 different drugs. Also in the video, she discusses the case of a 2-year old child who was able to combat brain tumors with raw cannabis juice.

“There’s a tendency to discount claims when something appears to be good for everything, but there’s a reason this is the case,” says Dr. Ethan Russo of Seattle in speaking how raw cannabis could benefit immune, nervous, and skeletal systems. “The endogenous cannabinoid system acts as a modulator in fine-tuning a lot of these systems, and if something is deranged biochemically in a person’s body, it may well be that a cannabinoid system can bring things back into balance.”

While some critics say you would have to juice a quite-expensive amount of cannabis to get enough of it, this is something that could become more feasible as marijuana continues to be deregulated.